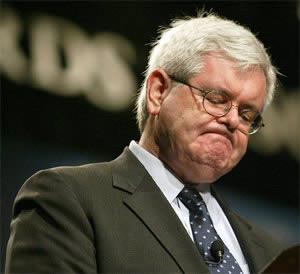 South Carolina on my Mind

By November, a third of the American people will believe that Barack Obama kidnapped the Lindbergh baby and Michelle drove the getaway car.
By Donald Kaul | January 9, 2012

Yet another Republican ABM (Anybody But Mitt) candidate has experienced failure to launch.

The Newt Gingrich rocket that seemed oh-so-formidable just a few weeks ago didn’t survive an avalanche of negative ads financed by stealth Romney money in Iowa. It crashed and burned on takeoff.

Romney rolled to victory by a whopping eight-vote margin over — surprise, surprise! — Rick Santorum, yet another new candidate fresh out of the ABM design studio. Romney, whose support (as George Will observed) “has fluctuated wildly between 23 and 26 percent,” got just under 25 percent of the vote.

The circus has moved on. New Hampshire, which was all but irrelevant this year, was only a pit stop on the way to South Carolina, home to the nation’s most vicious domestic politics.

Romney may think he’s campaigned before, but he ain’t seen nothing yet. The Palmetto state will greet him with charges of keeping illegal immigrants in his basement and his illegitimate children in the attic. It may allege that he once drove to Maine with his wife strapped to the roof of the car, if it hasn’t done that already.

(I’ve said before that the Iowa caucuses are a fraud. Let me take that back. Any process that can rid us of Michele Bachmann as a presidential candidate can’t be all bad.)

Whether Santorum can cut it as a Romney alternative is questionable, however. He virtually won in Iowa largely because he all but lived in the state for a year. It’s said that he not only shook hands with every potential Republican caucus-goer, he did their laundry and ran errands for them.

Conventional wisdom says he lacks the money and organization for a national television campaign and that there are too many Republicans across the United States to depend on house calls to garner their votes.

Santorum’s policy differences with Romney are negligible. The only big difference is that Santorum seems to mean all the crazy things he says. (Say what you will about Mitt, you can’t accuse him of sincerity.) Santorum is really, really against abortion and same-sex marriage and authentically for guns and torture. That plays better in Iowa than it does in some other places.

Should Santorum’s candidacy fail to find purchase in the rest of the nation, the Republicans still have Ron Paul available as an ABM weapon. He escaped Iowa with about a fifth of the vote, much of it coming, surprisingly, from young people.

I suppose I shouldn’t be that surprised. Paul is another manifestation of the zeitgeist that has produced both the tea party and the Occupy Wall Street movements. Its adherents are fed up with the current system and want to tear it down and start over.

Paul, a libertarian, is as liberal as he is conservative. He wants to get out of Afghanistan, legalize drugs, and let people marry whomever they wish, regardless of their gender. He’s also against taxes, Wall Street bailouts, and national health care. He’s probably against traffic lights too. Nobody’s asked him yet.

He’s not a rocket, though. He’s an open-cockpit biplane with a propeller that’s not built for the long campaign.

Who’s left then? Well, I suppose it’s Newt Gingrich. He’s been left for dead twice already in this campaign but, like Richard Nixon and Count Dracula, he keeps coming back. Who’s to say he can’t do it again?

Surely there’s no one on the planet who hates Mitt Romney more. Newt can be relied on to do everything in his power to see to it that Romney isn’t the next president of the United States.

If the Republican primaries are this mean this early, it bodes ill for the civility we can expect in the general election in the fall.

I confidently expect that by November, a third of the American people will believe that Barack Obama kidnapped the Lindbergh baby and Michelle drove the getaway car.

It’s called democracy, baby. On with the show.