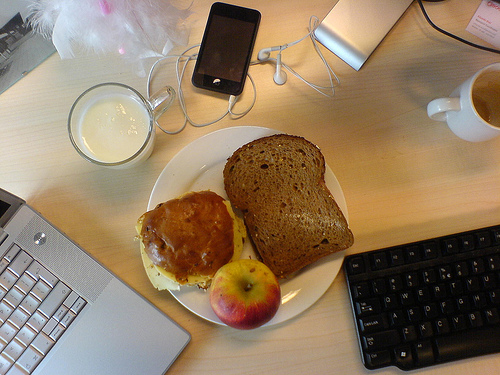 Step Away from That Desk

Do you eat lunch at your desk? Alone? Continuing to work as you chew?

Welcome to the new wondrous world of work in which employees feel intense pressure from bosses to labor right through lunch. In a survey, 62 percent of people with desk jobs said they grab a snack and keep working during lunch, rather than taking a pause to step outside, clear their heads, socialize with co-workers, and recharge.

By creating a nose-to-the-grindstone climate, companies are able to extract an extra hour of work — unpaid — from every cube captive who foregoes taking that noontime pause. This is yet another product of the corporate autocracy’s tightening grip over a union-free workplace. It’s not exactly a morale-builder, for it increases both stress and resentment.

So guess who’s doing something about the corporate usurpation of lunch? Corporations! Not by empowering workers, of course, but by exploiting their resentment. McDonald’s, a notorious union buster in its own workplaces, recently launched a perverse, workers-of-the-world-unite advertising campaign under the slogan, “It’s your lunch. Take it.” 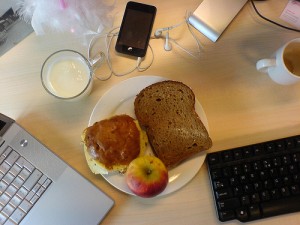 By “take it,” McD’s is saying that distressed desk jockeys should “overthrow the working lunch” by darting out for a calorie-packed Third Pounder Deluxe burger at McDonald’s. Likewise, KFC and Applebee’s have concocted crass PR pitches to divert legitimate worker anger into lunch consumerism in their chain store eateries.

The corporate theft of the lunch hour is not some hokey ad gimmick — it’s a real assault on the basic ethic of workplace fairness. For information and action check out a “Dear Abby”-style column written by AFL-CIO’s organizing director, Dave Wehde. Called “Dear David,” the weekly column addresses problems that people are having in their workplaces. Read it at www.WorkingAmerica.org.