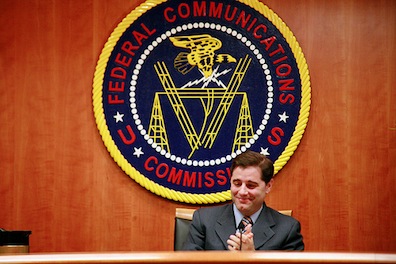 Why You Should Fear Big Bad Cable

Comcast's plan to merge with Time Warner Cable could leave millions of Americans stranded on the digital equivalent of a winding dirt road.
By Timothy Karr | March 5, 2014

Twenty-five years ago this month, Sir Tim Berners-Lee introduced an open protocol for sharing information that gave everyday Internet users the power over what they created and whom they connected with online.

Berners-Lee’s idea was to create a web of limitless access and choice. And he was largely successful.

We can use YouTube to share and watch videos, or we can switch over to Vimeo, Instagram, or Blip. We can speak directly with friends using Skype, Hangout, FaceTime or other voice and video services. We can connect and communicate anything with anyone at any time.

But all of that could change.

Big phone and cable companies want to turn the open network into their private fiefdoms — and take away many of the freedoms Internet users now take for granted. And regulators are letting them get away with it.

Comcast, the nation’s largest cable Internet provider, recently announced a $45 billion deal to buy our nation’s second-largest cable company, Time Warner Cable. If the Justice Department and Federal Communications Commission (FCC) approve the merger, the new communications giant will operate in 43 of the 50 largest metropolitan markets. It would control service more than one-third of all broadband Internet subscribers depend on for their access to the digital world.

This new mega-company would be able to leverage its power to set industry standards for price and services. This isn’t hypothetical. Comcast is already moving on plans to favor one online business or website over another.

In February, Comcast brokered a deal to prioritize Netflix videos over other streaming video content. This is likely the first of similar arrangements to give fast-lane privileges to certain companies while relegating the rest of our communications to the digital equivalent of a winding dirt road.

A federal appeals court paved the way for this maneuver in January when it overturned the FCC’s Net Neutrality rules. This means that Internet service providers are now free to block or degrade connections to websites and services they don’t like.

Comcast’s plan to re-route online content is happening at a time when it profits immensely from control over access. Over the past 17 years, the price of basic cable service has grown at more than twice the annual rate of inflation. And analysts put the company’s profit margins on providing broadband at 80 percent or higher.

It’s no wonder cable Internet is so profitable: There’s no competition. Most U.S. consumers have just one choice of cable provider. And this situation will only get worse if the government approves Comcast’s merger.

Given its many anti-competitive, anti-consumer elements, the combination of the two biggest cable companies should be a non-starter for regulators. But Washington has a mixed record on media consolidation. In January 2011, the FCC and Justice Department gave Comcast’s takeover of NBCUniversal a green light. Yet by the end of that same year they blocked AT&T’s attempt to purchase T-Mobile.

The move against AT&T offers reason for hope. But the government won’t block Comcast’s new merger unless the public speaks out. More than 60,000 people have already told regulators to stop it.

And customers of Comcast and Time Warner Cable should oppose the deal in even bigger numbers: Both companies regularly rank among the worst of the worst in consumer surveys.

Letting these two corporations join forces to control all things online could be the end of Berners-Lee’s vision of a people-powered Web — and the beginning of the reign of big, bad cable.

Timothy Karr is the senior director of strategy for Free Press. FreePress.net.
Distributed via OtherWords (OtherWords.org)