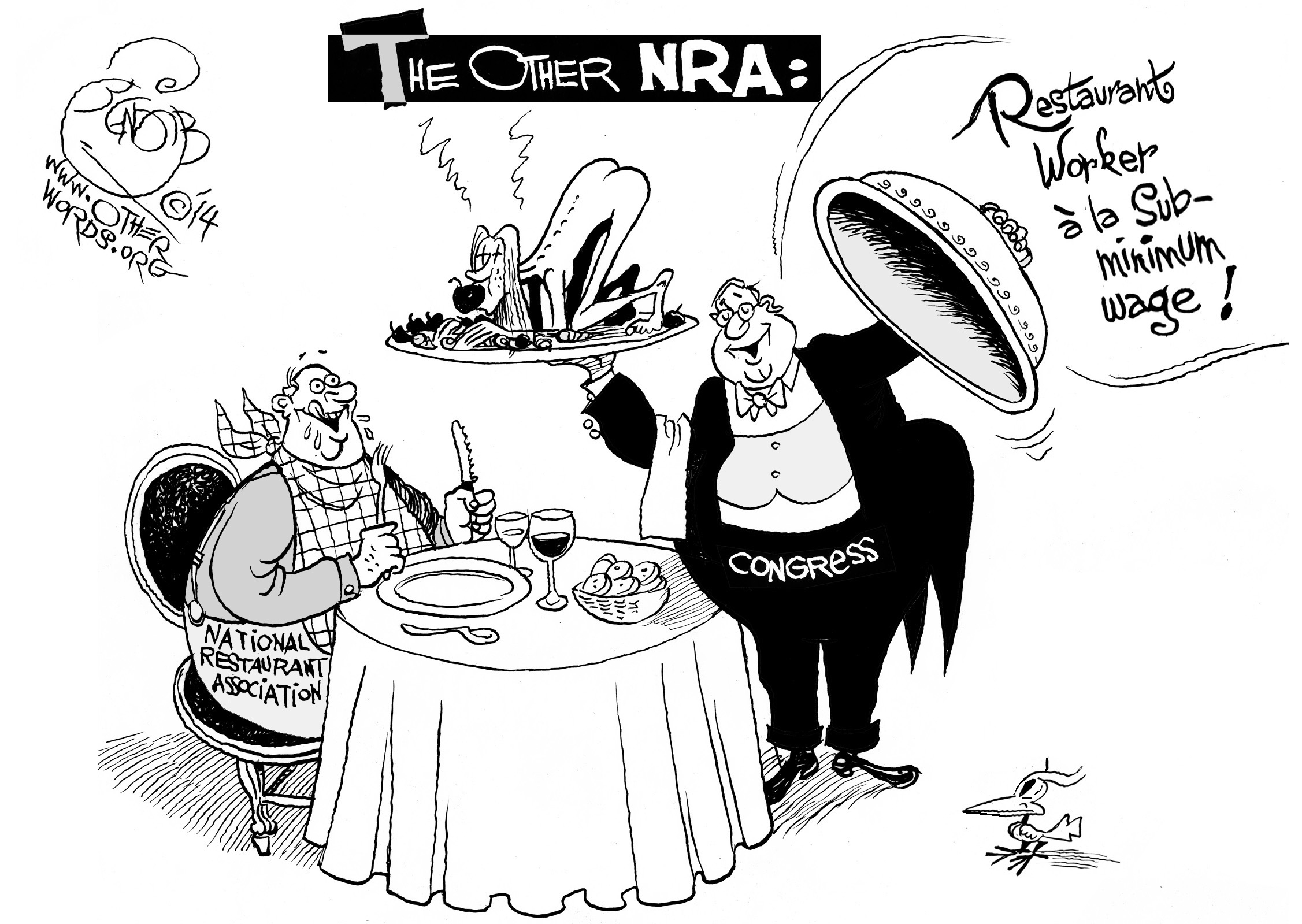 When Congress Serves the Other NRA, an OtherWords cartoon by Khalil Bendib

Waiter, Am I Subsidizing Your Pay?

The rest of us need to stop picking up the restaurant industry's tab.
By Marjorie E. Wood | April 22, 2014

Late April doesn’t just bring flocks of tourists to Washington. It’s when hundreds of members of the National Restaurant Association — a.k.a. the “other NRA” — swarm Capitol Hill for two intensive days of lobbying.

With a $65 million budget and over 52,000 members, the other NRA ranks among the nation’s most powerful corporate lobbies. In 2014, its top priorities include fighting pro-worker measures like paid sick days and new health care requirements the Affordable Care Act mandates for employees. 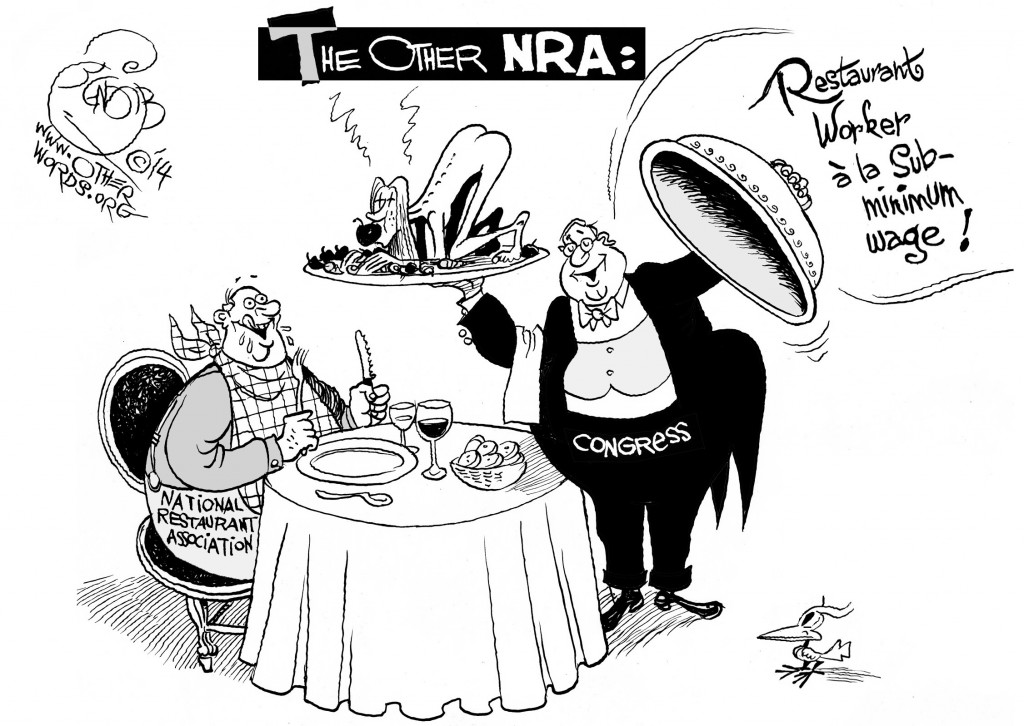 When Congress Serves the Other NRA, an OtherWords cartoon by Khalil Bendib

Challenging efforts to raise the minimum wage is the other NRA’s top priority right now. Legislative observers expect Congress to vote on a bill to raise the federal minimum from $7.25 to $10.10 per hour this spring.

The bill also includes a raise in the minimum wage for restaurant servers and other tipped workers, which has been stuck at $2.13 per hour for over 20 years. To date, the other NRA has spent more lobbying dollars opposing a minimum-wage boost than any other single industry group.

During their lobbying spree, members of the other NRA will no doubt profusely thank members of Congress who have helped maintain the status quo.

While they’re at it, there’s another group of people they should be generously thanking: American taxpayers.

Why? Taxpayers are subsidizing both the low wages of restaurant workers and the excessively high compensation of restaurant CEOs, according to a new report that I co-authored with Sarah Anderson, my Institute for Policy Studies colleague.

Like most low-wage employers, the restaurant industry pays its workers so little that many of them rely on Medicaid and other taxpayer-funded anti-poverty programs. For instance, more than 50 percent of fast food workers depend on some form of public assistance.

At the same time, taxpayers subsidize sky-high executive compensation through a trick known as the “performance pay” loophole. This tax break lets large corporations deduct unlimited amounts of money from their income taxes for the cost of stock options and other forms of “performance-based” executive pay.

Though Congress capped the tax deductibility of compensation at $1 million in 1993, this loophole creates an incentive for companies to pay their CEOs extravagantly.

And when corporations lower their tax bills by activating this loophole, somebody else gets stuck with the tab and has to make up for the loss. It can be done by cutting spending or raising taxes. Or both.

In our report, we found that during the past two years, the CEOs of the 20 largest NRA members pocketed more than $662 million in fully deductible “performance pay,” lowering their companies’ IRS bills by an estimated $232 million.

While the other NRA’s members are busy thanking Congress for its hospitality, perhaps they should also sit down and write some thank you notes to the American taxpayers.

To make sure Congress also hears the voices of regular people during this lobbying spree, Restaurant Opportunities Centers United, the National Domestic Workers Alliance, and National People’s Action will hold a demonstration on April 28. They’ll protest the other NRA’s greed, worker exploitation, and undue influence.

Even if you’ve never waited tables or poured drinks for a living, chances are you pay taxes. I hope you agree that it’s high time Congress told the other NRA to pick up its own tab.