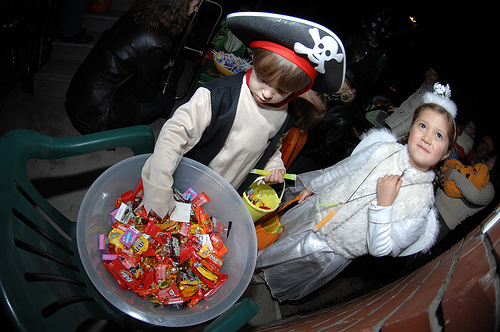 The amount of sugar Americans eat is scarier than the slim chance they'll get Ebola.
By Jill Richardson | October 22, 2014

As airlines, cruise ships, and hospitals cope with waves of Ebola jitters, I’m wondering whether the panic the deadly virus is inducing will distort Halloween traditions this year.

No, I’m not talking about Ebola-related costumes.

There are real precautions we must take, but at this point the Ebola hysteria is overblown.

If Americans are worried about riding on airplanes with strangers, surely some folks will have qualms about sending their children door to door to strangers’ homes to collect candy.

And, if you’re worried your kids will get Ebola from trick-or-treating, please get a grip.

This is simply a case study in how humans perceive unfamiliar risks as scarier than familiar ones. For example, compare the number of people killed in plane crashes (fewer than 1,000 a year worldwide) with the number of people who perish each year in car accidents (more than 33,000 in this country alone). But do you know anyone who is too afraid to get in a car?

For those who are truly exposed to the disease, especially in the affected West African nations, Ebola is terrifying. A deadly illness that causes bleeding out of every orifice is scarier than any costume you will see on Halloween.

But only a handful of people have been treated for Ebola in the United States so far. And fortunately we are equipped with far better health infrastructure than Sierra Leone, Liberia, and Guinea if more cases do pop up.

Ebola isn’t an airborne virus like the flu. The people who get it are typically relatives or health workers who come into direct contact with patients’ bodily fluids while caring for them or handling their bodies after death.

Also, people who get Ebola aren’t contagious prior to showing symptoms. That means anyone who is contagious won’t be well enough to stand at the door handing out Halloween candy. They’ll be in bed, very sick.

Unfortunately, the Dallas hospital that encountered the first Ebola case in the United States was unprepared to keep its workers safe. Even after Thomas Eric Duncan was admitted to Texas Presbyterian Hospital, the staff providing his care didn’t wear hazmat suits until his Ebola diagnosis was confirmed — two days after his admission. No doubt, all hospitals will learn from their well-publicized mistakes.

Trick-or-treaters are at a much greater risk of catching the flu. But that’s not the biggest health risk they face.

The spookiest part of Halloween is the candy.

Not candy laced with arsenic or bearing hidden razor blades. Just candy. Because Americans eat more than double the recommended amount of added sugars each day. Eating too much sugar increases the risk you’ll get diabetes and other diet-related chronic diseases.

Of course, one binge a year on Halloween won’t hurt anyone — but that’s not what Americans actually do. We eat sugar in our treats and sugar in everything else too (ketchup, salad dressing, bread, fruit snacks, etc.).

If you want to save yourself and your kids from a scary disease, stop fretting about Ebola and eat less sugar. Diabetes and heart disease are truly worth getting frightened about. Even if you wait until after Halloween, cutting back on sugar will improve your family’s health.