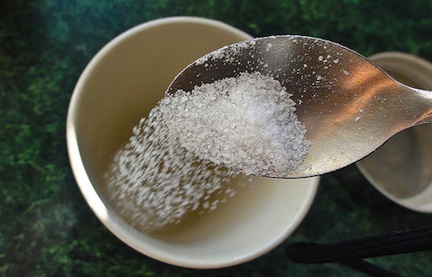 After two decades of consumer campaigns, the government has agreed to include added sugars on nutrition labels.
By Jill Richardson | March 5, 2014

The Food and Drug Administration recently came out with a sweet surprise. Its proposed new nutrition label will finally give us a bit of key information we need to understand our food: the amount of added sugars.

If you look at a nutrition label now, you will see how many grams of sugar are in a serving of your food. That includes all sugars. It counts the lactose in milk and naturally occurring sugars from fruit. The nutritionally important bit of info for most of us is not total sugars, but added sugars — which include the sweetener we call “sugar” plus others like high-fructose corn syrup and honey.

In addition to the blueberries and the yogurt in your blueberry yogurt, how much sugar did the manufacturer add? If you’re trying to pick the healthiest yogurt or granola bar, that’s a fact you need to know. 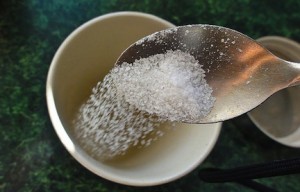 OK, so every breakfast cereal in the aisle has some sugar added to it, but do the 19 grams of sugar in Kellogg’s Raisin Bran come from the raisins or from sugar and high-fructose corn syrup? How does it stack up against Froot Loops, which only has 12 grams of sugar but no fruit at all?

Until now, the simplest way to do this was something nobody will try at home. You can count the number of raisins per serving of Raisin Bran and then calculate the amount of sugar in them. And, as it turns out, the cereal is actually full of added sugars.

More than two decades ago, the nutrition activist group Center for Science in the Public Interest asked the government to include “Added Sugars” on nutrition labels. The government refused. Why? Because it might confuse consumers.

The activist group tried again in 1999. That year, sugar consumption hit an all-time high. Yet again, the answer was no.

In 2013, with First Lady Michelle Obama calling the nation’s attention to the catastrophic state of our diets, it was time to try again. And — just recently — the Food and Drug Administration agreed.

It’s ridiculous that it took two decades for the government to side with consumers over the interests of the food industry, but thank goodness our leaders came to their senses. At least on this one issue.

The nutrition advice you’ve probably heard on sugar involves phrases like “empty calories” and “eat sparingly.” The conventional wisdom was that added sugars were bad simply because they contributed calories to your diet without any nutrition.

As for the advice about eating it “sparingly,” that’s not what we do here in the United States, where about 15 percent of our calories come from sugar.

In truth, added sugar’s more than just an empty calorie. It’s harmful to your body in a number of ways, and eating too much can increase your risk of contracting diabetes and heart disease, having a stroke, and more serious illnesses.

The good news is, once the new nutrition labels take effect, you’ll at least be able to know how much you’re eating. Going by the American Heart Association’s recommendations, women should stick to six teaspoons (25 grams) or less, and men to nine teaspoons (38 grams) or less.

Hopefully, food companies will be as eager to claim their products are low in added sugars as they were to claim “zero trans fats” when that went on the label.

Successfully reducing sugar consumption to healthier levels, even with labeling, will be no picnic in the toxic food environment we live in. The real change will come if — or when — food companies decide to remove heaps of the sweet stuff from our food instead of admitting to obscene amounts of it on their labels.

And that will be a sweet victory for health.