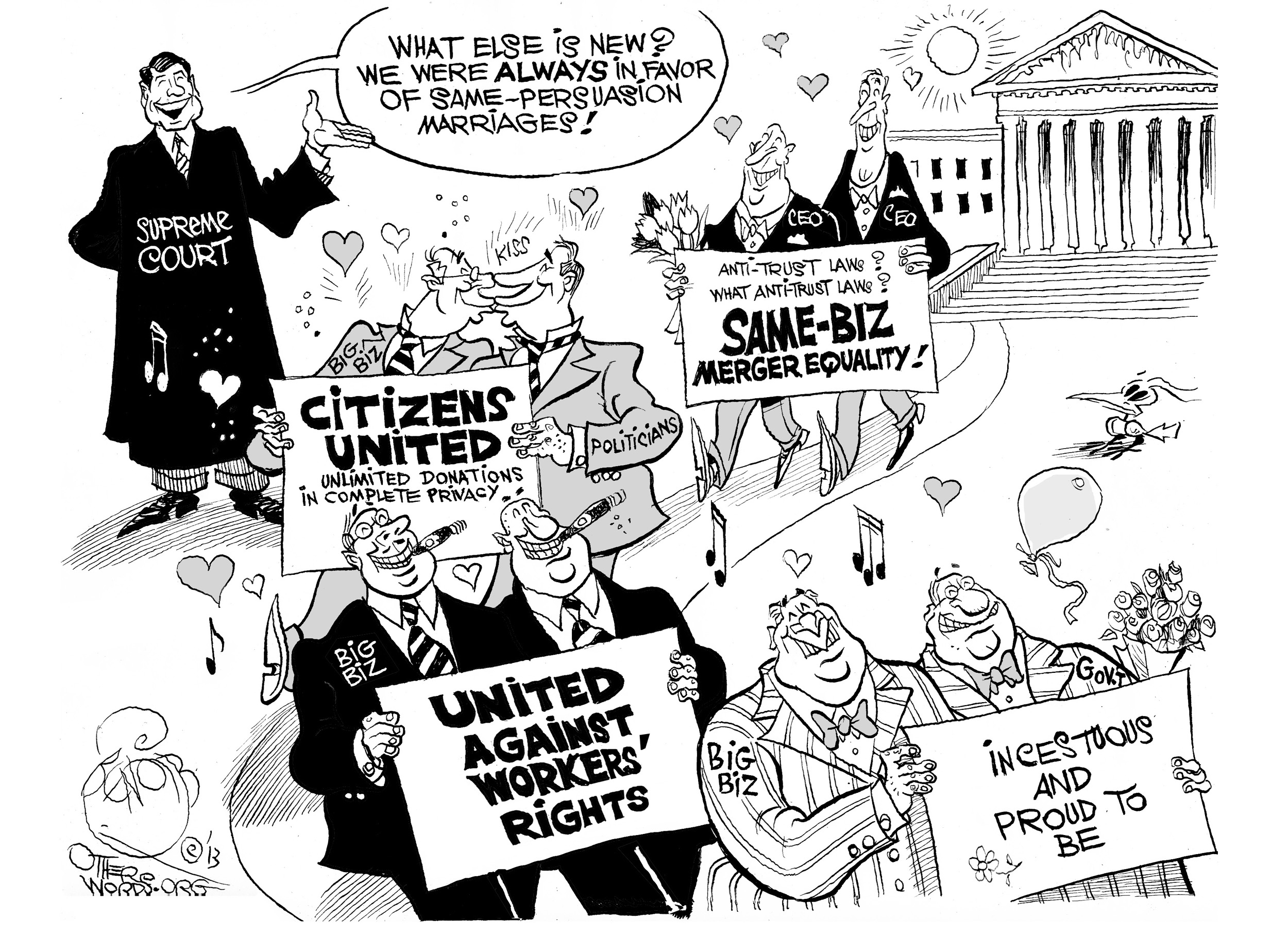 Merger Equality at the Supreme Court, an OtherWords cartoon by Khalil Bendib

Swerving to the Right

The Supreme Court rulings that made marriage equality a reality for many same-sex couples and struck down an Arizona law that made it harder to register to vote were important civil rights victories. But, they obscure our highest court’s rightward shift.

Consider this: In recent years, the Supreme Court has turned corporate treasuries into campaign slush funds for CEOs, demolished campaign finance laws, aided and abetted pay discrimination, made it much harder for consumers and workers to file class action lawsuits against corporations that have cheated them, and kindly delivered the White House to one lucky Republican from Texas (who, in turn, helped to create today’s far-right Supreme Court majority).

Just this year, the Court found new ways to make it more difficult for working people to sue their employers for employment discrimination and for consumers to join together in class action lawsuits. It also destroyed the most important enforcement mechanism of the Voting Rights Act, which for almost half a century made it possible for millions of Americans to cast votes without having to overcome enormous obstacles on the way to the ballot box. 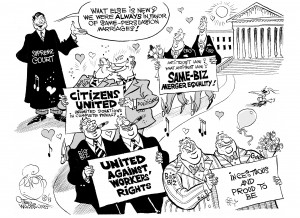 Merger Equality at the Supreme Court, an OtherWords cartoon by Khalil Bendib

Study after study has found that the Supreme Court, under Chief Justice John Roberts and his predecessor William Rehnquist, has swerved hard to the right, systematically favoring corporate interests over workers, consumers, and voters. Former Justice John Paul Stevens, a moderate Republican placed on the Supreme Court by Gerald Ford, observed in 2007 that in his three decades on the court, nearly every justice who retired had been replaced by someone who leaned further to the right.

By the time Stevens retired, he was seen as a staunch liberal. His views hadn’t shifted to the left, but the justices around him had shifted far to the right.

Despite all this, Americans still perceive the Supreme Court as a liberal institution.

The Supreme Court’s rightward lean, paired with the public’s misperception that it in fact leans left, is no accident. For decades, right-wing leaders have worked in popular culture to attack the courts as liberal bastions while successfully organizing to dominate and control legal institutions to create courts that no longer look out for the rights of all Americans.

A perfect example of public confusion is the reaction to the Supreme Court’s narrow decision to uphold the Affordable Care Act. While the final outcome of the case was good news for supporters of universal, affordable health care, Chief Justice John Roberts’ opinion was undergirded by remarkably conservative legal theory.

Along with the other four conservatives on the court, Roberts laid the groundwork for restricting the ability of the federal government to solve national problems under the Constitution’s Commerce Clause — harkening back to the Gilded Age era when the Supreme Court routinely struck down protections for workers and consumers as unconstitutional.

The Supreme Court’s narrow majority in two key marriage equality cases this year rightly got plenty of attention. But we shouldn’t let conservative Justice Anthony Kennedy’s fair-mindedness on one issue hide the fact that he often sides with a conservative majority in one of the most right-leaning courts in American history.

Michael B. Keegan is the president of People For the American Way. PFAW.org
Distributed via OtherWords (OtherWords.org)