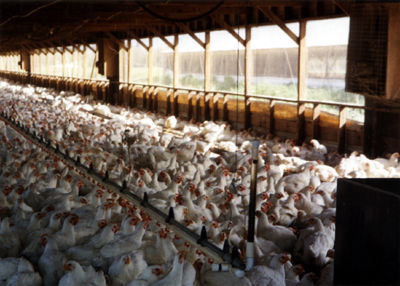 The EPA has to stop standing by while factory farming pollutes our airways and watersheds and poisons our communities.
By Wenonah Hauter | September 25, 2013

One of the biggest drawbacks of the factory farms producing most of our food is the amount of pollution they generate.

Factory farms, which raise the bulk of our chickens, hogs, and turkeys, and house most of our dairy cows, are one of the nation’s largest sources of water pollution. Unfortunately, Big Ag typically avoids taking responsibility for the pollution it causes by hiding behind subcontracted animal farming operators who work on their behalf.

The basis for any effort to regulate water pollution is the Clean Water Act, which was created with the ultimate national goal of completely eliminating all pollution in public waterways. The first step toward achieving that goal requires access to information: Where are the factory farms that are polluting, how much are they polluting, and who are the operators?

The Environmental Protection Agency (EPA) is the agency responsible for collecting and coordinating this data, but it isn’t getting the job done. The EPA doesn’t even know how many factory farms there are, where they’re located, or how much agricultural waste they produce. 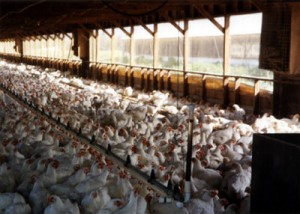 The EPA actually had a chance to reveal the scale of this kind of agricultural pollution in 2012 when it proposed a long-overdue information-gathering exercise to catalogue some of the minimal information needed to start properly regulating factory farms.

Unfortunately, the agency caved to the industry’s continued political bullying and eventually abandoned its information-gathering plan in July of that year.

In late August, Food & Water Watch filed a lawsuit against the EPA for its refusal to gather the appropriate amount of data about the nation’s factory farms — information that the public has a right to know. Our suit specifically addressed the need for the agency to reinstate its illegally withdrawn data gathering process so Americans can finally access the information they need to protect their waterways and communities. This action was necessary to force the EPA to gather much-needed information.

Food & Water Watch also recently filed a FOIA request with the EPA asking for records related to factory farms in several states. But the American Farm Bureau Federation had filed a lawsuit against the EPA to prevent the agency from disclosing any “personal information” about these operations to the American public, which would have included the names and contact information of their owners and other data that’s readily available for every other industry in the country.

Food & Water Watch filed a motion to intervene in the Farm Bureau’s suit against the EPA to protect the public’s rights to access “public” information. Operators of facilities that raise tens and hundreds of thousands of animals while working for the big meat processors can’t be allowed to hide behind the “personal information” excuse when these operations are having such a damaging impact on our communities and public health. We filed this suit to ensure that once the EPA gets this data, the American public has the right to access it — unfiltered — under our Freedom of Information Act (FOIA) laws.

The EPA has stood by while factory farming has polluted our airways and watersheds and poisoned our communities. That’s why, 40 years after the passage of the Clean Water Act, this industry continues to be largely unmonitored, unregulated, and operating under the cover of darkness.