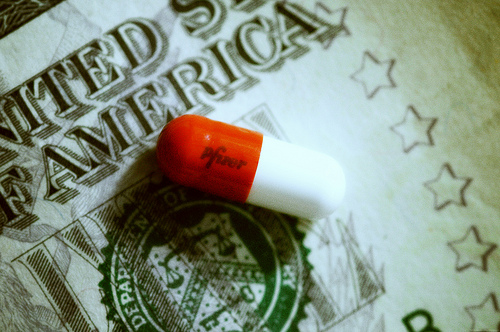 Tax Cuts for the Rich, Paid for with Your Health Care

So-called “tax reform” would have the same result as health care repeal: millions lose their care, while millionaires get a tax break.
By LeeAnn Hall | October 11, 2017

When Republican leaders tried to repeal health care in the spring and summer, many Americans raised the alarm and made a ruckus. We asked hard questions, looked at the independent analyses, held town halls, told our health care stories, and took to the streets.

Because of that overwhelming opposition, plans to slash health care to pay for corporate tax breaks failed. Republican leaders haven’t given up. In fact, they’ve already begun voting on a scheme to slash taxes for corporations and multi-millionaires — paid for by cuts to health care.

Now the plan to raid our health care is buried in the GOP tax scheme and budget process. Here’s how they’re putting it into place.

On October 5, the House of Representatives passed a budget resolution that cuts $1.5 trillion from Medicaid and other health programs, capping and starving Medicaid.

On top of that, the budget also slices almost $500 billion from Medicare — and proposes turning it into a privatized voucher program and raising the eligibility age to 67.

The Senate budget proposal is just as bad. It would cut Medicaid, Medicare, and the financial assistance people get to buy insurance through the Affordable Care Act exchanges.

For the better part of 30 years, I’ve been organizing people and communities to win quality, affordable health care for all. These cuts will hurt all of us, especially people who need health care the most: seniors, people with disabilities, children.

The payoff? Our elected representatives get to dole out tax breaks to their big-money donors and corporate friends.

Don’t expect House Speaker Paul Ryan, Senate Majority Leader Mitch McConnell, and the others behind this scheme to be honest about it. They’re saying their tax cut plan for corporations and multi-millionaires will help ordinary people.

Their idea of who ordinary people are is pretty strange.

The rich get richer and the rest of us lose income, health care, and other essential services like housing, food, and education. (And don’t think they won’t come for Social Security next.)

We’ll wind up with what Republican leaders wanted from health care repeal: tens of millions of people thrown off their health care to clear the way for more than $1 trillion in tax breaks for the mega-rich.

All this comes at a time of soaring corporate profits — with prescription drug corporations continuing to rake in exorbitant profits by price-gouging patients on lifesaving medications.

Instead of requiring Medicare to negotiate lower prices with drug corporations — which would mean huge savings for the public — Republican leaders in Congress want us to pay for corporate tax cuts with our health care.

What part of “no” didn’t they understand?

LeeAnn Hall is the co-director of People’s Action and a member of the executive committee of Health Care for America Now. Distributed by OtherWords.org.