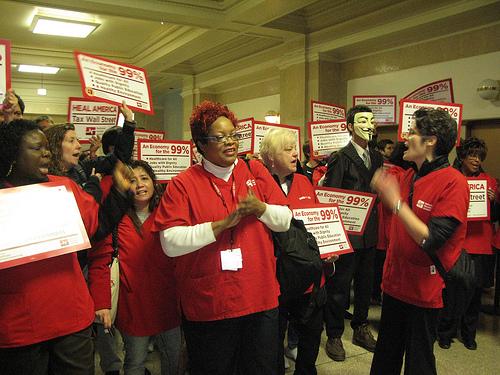 The nation's nurses are calling for a tax on financial transactions to begin raising the revenue needed to fix the growing social crisis.
By Deborah Burger | October 31, 2011

We’ve organized rallies in New York, Boston, Washington, Los Angeles, Chicago, San Francisco, and Las Vegas, as well as in Minnesota, Michigan, Texas, Florida, and other states and cities. We’ve held demonstrations at 60 congressional field offices. And we’ve joined the Occupy Together movement as first aid volunteers in more than a dozen sites, including on Wall Street, where it all started. 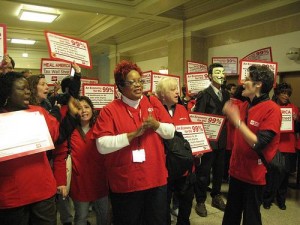 Through these actions and others, we’re drawing attention to a national emergency and calling for a tiny but potentially powerful tax on financial transactions. This simple step would amass up to $350 billion annually in this country as part of a global push for revenue desperately needed here and elsewhere around the world.

Why are we making this tax a huge priority? For nurses, patient care extends beyond the bedside.

Consider this heartbreaking story. Steven Cross, a single dad, departed his Lakeville, Minnesota home last month after it was seized by the bank. He was one of the millions of Americans — through a combination of stagnant wages, massive unemployment, Wall Street gouging, and bank fraud — forced out of their homes in recent years. He left his 11-year-old son behind with his neighbors, telling them in a note, “I don’t want him to remember me as homeless.” Actually, more than memories were at stake. According to a recent survey conducted in California, two out of five homeless people are at risk of dying a “premature death.”

The richest 1 percent is doing us in. No one knows that better than us nurses. People are getting sick as a result of the system’s collapse. Poverty and financial demise are engulfing communities while the wealth of a tiny minority continues to grow.

Early heart attacks, stomach ailments in children, acute anxiety in all age groups, and strokes are on the rise. All of these conditions are stress-related, induced by the conditions imposed on a society dedicated to fulfilling the needs of the richest 1 percent.

There was a 39-percent increase in suicide attempts in families experiencing foreclosure in four hard-hit states, according to a study conducted by researchers at Princeton and Georgia State universities. The 1 percent is bad for our health. Nurses see it every day in our hospitals and communities, and even in our own families. That’s why we’re protesting. We’ll keep it up for the duration, until we see progress toward getting crucial new resources into our communities.

America’s child poverty rate of 22 percent — and rising — is more than a national disgrace. It’s a recipe for disaster. But it can begin to be addressed by revenue from a tax on stocks, bonds, derivatives, and speculative activity.

President Barack Obama must decide which side he is on, Wall Street or Main Street. If he’s on Main Street’s side, he needs to join the global movement in support of a tax on financial speculation. National Nurses United is sponsoring a major protest at the Treasury Department on Nov. 3, where we’ll send this message to Obama, as well as to Treasury Secretary Timothy Geithner, who’s been telling Europe not to institute a financial transaction tax.

We need a tax like this. It would be a small amount for Wall Street to pay back to a reeling Main Street. It would be a down payment on the larger sum needed to put this country on its feet — to get the chronically jobless back to work, reduce school overcrowding, and provide quality health care for all Americans. To do all that, we’ll need to find new sources of revenue. There’s no other way to rescue our communities, save our families, and make our children healthy.

The alternative is bleak for us all — for those struggling like Steven Cross in Minnesota and for the 1 percent. Our protests are for our patients and for our country. We won’t stop until an agenda to rebuild Main Street is secured.

Deborah Burger, RN, is co-president of National Nurses United, the largest union and professional association of U.S. registered nurses, with 170,000 members. She will attend the G-20 Summit in Cannes, France, to express support for a meaningful global tax on financial transactions. nationalnursesunited.org