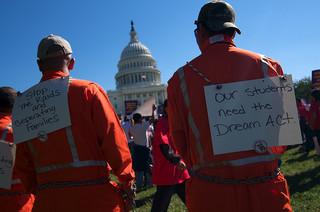 Give me your tired, your poor, your huddled masses yearning to be free. I’ll give them some taxation without representation.

With apologies to Emma Lazarus, that’s the situation faced by many of the more than 10 million undocumented immigrants who live in the United States. Making up about 5 percent of the workforce, most of the people without legal status have lived in this country for a decade or more.

And before throngs of fear-mongering nativists take to the airwaves this Tax Day to claim that immigrants are stealing taxpayers’ jobs and resources, let me assure you that the undocumented consistently contribute to the government’s coffers through payroll, sales, property, and income taxes.

Consider Mayra Hidalgo, for example. She comes from one of the millions of families that have relocated from around the world — and played by the tax rules — while remaining in the United States beyond their authorized stay. When her parents left their native Costa Rica, she was only six months old. While watching out for reform that might open the door for them to get legal status, they steadily paid their income taxes to build a good record. 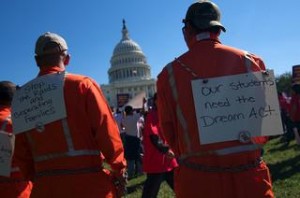 More than 3 million people paid their taxes using an Individual Taxpayer’s Number (in place of a Social Security Number) in 2010, totaling $1.8 billion in contributions from taxpayers who are unable to work legally.

Hidalgo’s parents got their green cards in 2010. But due to an unfair rule that disqualifies young people from a family’s permanent residency application if they turn 18 while they await the outcome, Hidalgo remains undocumented. This forced her to forego the opportunity to attend a top-tier state school, settling instead for the more affordable Polk State College. “It’s extremely frustrating,” she said. “Finding out I wasn’t able to get financial aid was heartbreaking.”

The government doesn’t give all immigrants an opportunity to adjust their status, but the taxman doesn’t discriminate. Hidalgo’s parents might have been undocumented, but they’ve also been Florida taxpayers for 21 years. In Florida, sales taxes fund the higher education system. Yet no amount of immigrant purchasing power has been enough to convince Florida legislators to allow immigrant youth to attend their public colleges as residents.

“It is a constant feeling of anxiety, having to live under this level of stress,” said Hidalgo, who belongs to the immigrant youth organization Students Working for Equal Rights.

Congress is likely to target families like the Hidalgos as it debates the 2013 budget. In December, the House of Representatives voted for a tax package that would effectively raise taxes on approximately 2 million working immigrant families like Mayra’s.

By denying them eligibility for the reimbursable Additional Child Tax Credit (ACTC), Congress claims to be discouraging illegal immigration. In reality, they would be punishing taxpaying immigrants and their kids.

State legislators around the nation have also claimed to defend the interests of taxpayers while promoting harsh immigration enforcement laws. Alabama’s so-called “Alabama Taxpayer and Citizen Protection Act,” for example, is intended to make life so unbearable for undocumented immigrants that they choose to leave on their own. Similar laws are on the books in Utah, South Carolina, Indiana, and Georgia. Another is in the works in Mississippi.

Meanwhile, the Obama administration is of two minds on this issue. The Justice Department has opted to sue states that have enacted these laws. But the Department of Homeland Security has beefed up enforcement and deported more people than ever. Even while acknowledging that the system is dysfunctional without a path to legal status for those already here, Obama has enforced the law to its fullest extent.

If immigration is the sincerest form of flattery, the nation’s politicians are showing they can’t take a compliment. But there’s something worse than a country anyone can enter to seek a better life. It’s a country where no one wants to go.

Matias Ramos, the Institute for Policy Studies’ Carol Jean and Edward F. Newman fellow, is a former undocumented student and a co-founder of the United We Dream Network. www.ips-dc.org
Distributed via OtherWords (OtherWords.org)