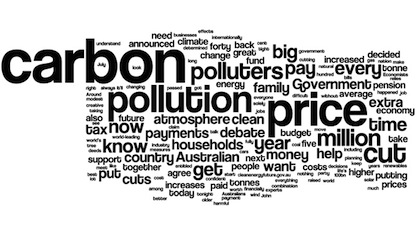 A Taxing Solution to the Greatest Challenge of Our Time

Putting a price on carbon emissions is one of the best ways we can slow the pace of climate change.
By Don Kraus, Mona Funiciello | April 9, 2014

Ben Franklin said it best — nothing is certain, “except death and taxes.”

Like most Americans, we submit our 1040s to maintain the health of our nation. However, we’d personally rather decrease our income tax and instead pay a fee that reduces carbon pollution and could preserve the planet.

The carbon-intensive oil, gas, and coal industries are stoking climate change. According to a new UN report, the threats to our civilization are enormous. Crop failures, the top concern in the UN’s report, will cause widespread starvation in all parts of the world. Countries will face a cascade of destabilizing events: severe water shortages, heat waves, floods, droughts, wildfires, intense storms, rising sea levels and other catastrophes on an unprecedented scale. Civil wars and conflicts between nations will increase as people compete for scarce natural resources.

The good news is that while it is too late to avoid climate change — it’s already happening — humanity can still temper its force. One of the simplest ways to slow the pace of climate change is by levying a fee on greenhouse gas emissions.

Putting a price on burning oil, gas, and coal that reflects the damage inflicted on the environment will make renewable energy alternatives (like solar, geothermal, and wind) and energy-reducing investments more competitive.

Our friend Alan Rushforth lives near Philadelphia and started a small solar-powered water-heating business a few years ago. Even with state and federal subsidies, it took Rushforth Solar’s customers five to seven years to break even compared with the cost of installing natural gas heaters, so it was a tough sell.

“If there were a 10 to 15 percent fee on carbon pollution, with a schedule of more increases to come, it would light a fire under all sorts of energy saving technologies and behaviors,” Alan said. “Not just hot water solar.”

Many of the biggest global corporations — including leading oil and gas companies — agree with our friend. They not only anticipate a price on carbon, but also have already alerted their shareholders about this possibility.

Carbon taxes are working in places like British Columbia. The Canadian province launched a revenue-neutral carbon tax in 2008, placing a fee on emissions generated from burning fuel. What happened?

The impact was huge. Fossil-fuel consumption dropped by almost 19 percent per capita compared with the rest of Canada. Meanwhile the province maintains strong employment and its economy is strong.

Climate change is at a tipping point, and decisions made during the next few years will determine how devastating it will really get. An upcoming UN climate summit and another global meeting in Paris in 2015 must produce a new pact on carbon pollution. Taxing carbon here in the United States would pave the way for a global agreement on the price of carbon that could cut emissions and spur all nations to adopt new ways to protect the environment.

Our leaders must do more to address climate change, but they can’t solve the problem alone. Secretary of State John Kerry drove the urgency home during a speech in Indonesia.

“Even if every single American got on a bicycle tomorrow and carpooled…used only solar panels to power their homes [and] planted a dozen trees…that still wouldn’t be enough to counter the carbon pollution coming from the rest of the world,” Kerry said. “We need a global solution.”

So while death and taxes are certain, what kind of taxes we pay and how secure they make us are not. It’s time to give carbon taxes a shot. Future generations will thank us for taking this step before it’s too late.

Don Kraus is the president and CEO of GlobalSolutions.org and Mona Funiciello is an independent consultant who specializes in climate change policy and strategy.
Distributed via OtherWords.org