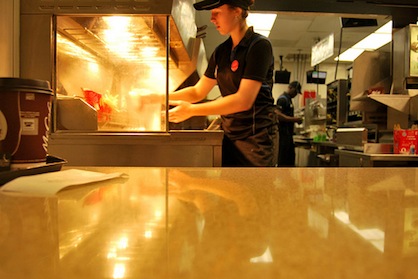 Why Tea Partiers Should Back Minimum Wage Raise

If tea-partying Republicans want to force the GOP establishment to stand for principle, they have to make the the party's big-business faction feel pain.
By John Stoehr | May 21, 2014

If tea-partying Republicans were politically strategic animals, they’d support President Barack Obama’s call to raise the minimum wage to $10.10 an hour. I know that sounds insane.

But as that GOP faction struggles against the Republican Party’s establishment, perhaps it’s time to stop using the primary as its weapon of choice. If you want to beat the GOP establishment, challenging incumbents is just one way to do it. Another way is to hit big business where it hurts. 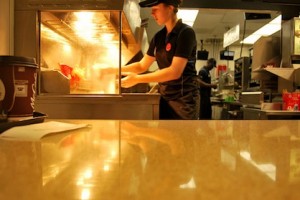 In economic terms, the tea party’s roots go back to Thomas Jefferson.

Jefferson couldn’t have predicted a world transformed by an industrial revolution after which corporations dominated a national economy and employed legions of workers. Nor could he foresee large corporations bending government policy to their will to the detriment of small businesses.

Tea-partying Americans say they believe that releasing the working class from wage slavery and welfare and forcing corporations to compete fairly would fix the economy. They think the best way to achieve that is by starving the federal budget to preclude handouts to the poor and corporations.

So how would raising the minimum wage help achieve that goal?

The conservative Jeffersonian worldview makes room for government “interference,” as long as it helps those who help themselves. Yes, raising the minimum wage increases worker pay. More importantly, it helps small businesses. As a small business owner said in a new survey conducted by Advocates for Independent Business: “We need to raise the minimum wage to get the economy growing again.”

Indeed, the people most concerned about raising the minimum wage to $10.10 an hour are the owners and managers of large corporations because higher wages eat into their profits. And millions of Americans employed by large companies earn so little that they rely on government benefits to eke by. It’s costing Uncle Sam $7 billion just to cover the public assistance costs associated with the fast-food industry’s rock-bottom wages, according to Bloomberg Businessweek.

If Republicans in the tea-party wing want to force the GOP establishment’s hand, they have to make the Republican Party’s big-business faction feel some pain. To do that, they should threaten to join Democrats in raising the minimum wage. Higher wages are among the things big business fears most.

This wouldn’t just be a wise political move. It’s a position entirely consistent with principles first laid out by one of the founding fathers.

Clearly, there’s a catch. If tea-party Republicans did disentangle themselves from big-business benefactors, they’d jeopardize the backing of deep pockets who have exploited their energy to achieve their profit-preserving objectives since 2010.

Obviously, nothing of the sort is going to happen. Congress is bound to remain gridlocked until November — or even later than that — on many important priorities.

But if tea-party Republicans were as principled as they say they are, they’d support a minimum wage hike.

John Stoehr is the managing editor of The Washington Spectator.
Distributed via OtherWords.org