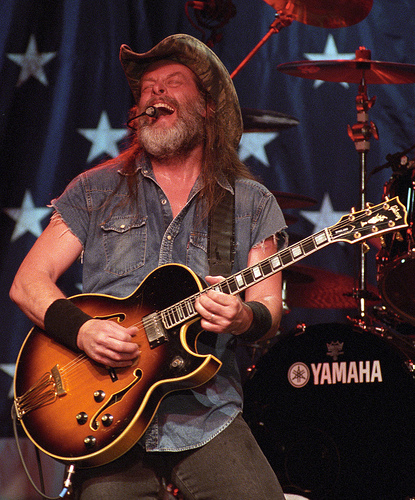 Ted Nugent Falls off His Rocker

The Republican nominee in the Texas gubernatorial race should know better than to embrace someone spouting racist and sexist views.
By Jim Hightower | March 5, 2014

Ted Nugent, the old rocker from the Seventies, is now just plain old. And off his rocker. 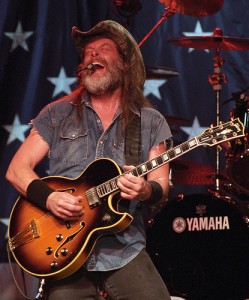 Naturally, Greg Abbott — the Republican candidate for governor of Texas — promptly invited this scurrilous lout to come for a visit.

Abbott is currently the state attorney general. As a dyed-in-the-wool tea party extremist, he apparently thought it would juice up his far-out GOP flock to have the rabidly nutty Nugent come campaign with him.

Ted came. He embraced the gubernatorial wannabe as his “blood brother.” But the brotherhood gambit backfired.

Even Republican leaders wondered aloud why Abbott would, as one put it, “keep company with a noted misogynist and bigot.” In addition to Nugent’s disgusting “subhuman mongrel” slur, the old rocker has also admitted to being “addicted” to underage girls.

The issue, however, isn’t Nugent’s sordid character, but Abbott’s.

Hugging an infamous predator and hate-monger for political gain is both morally repugnant and politically stupid. Yet, Abbott continues to cling to Nugent’s embrace, tersely (and cluelessly) saying: “It’s time to move beyond this.”

A campaign aide even tried to paint Nugent’s endorsement as a positive: “We appreciate the support of everyone who supports protecting our constitution.”

Everyone, including sexual predators and overt racists? How about mass murderers?

Shouldn’t a candidate for governor — even in Texas — draw a sharper moral line?