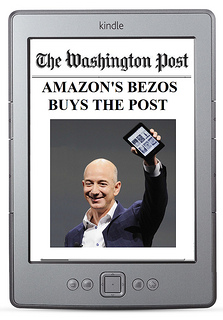 Has plutocracy finally overwhelmed our press? Some veteran journalists fear the worst. Another grand old family of American journalism, the lament goes, has stepped away. Who can we now count on to protect the public interest?

Yes, the Graham family that owned the Post for the past 80 years did perform a notable public service after the 1972 Watergate break-in. But the Grahams may have performed an even greater service — for plutocracy — three years later when they hired “replacement workers” to grab away the jobs of striking Post pressmen.

That move broke the unwritten rule that had held sway among “respectable” employers for the entire mid-20th century and set a precedent that President Ronald Reagan would exploit, to the fullest, six years later. Reagan replaced striking air traffic controllers and busted their union, a two-step that would help shove the American labor movement on a three-decade-long slide.

None of these union workers, at last count, labor in Amazon’s vast and often contracted-out warehouses. Exhausted after 12-hour shifts, these employees regularly wait, unpaid and for nearly a half-hour, at security checkpoints meant to detect pilfering.

A class action lawsuit against a contractor for the mammoth online retailer that runs many of its warehouses is pending. The plaintiffs accuse the warehouse operator of systematic wage theft.

Amazon has, to be sure, started making nice on some fronts. Last year, after a barrage of negative publicity, the company did install air-conditioning in its brutally hot warehouse workplaces.

But the company’s basic, take-no-prisoners business model is still roaring along. That formula has made Jeff Bezos staggeringly rich and denied middle-class status to tens of thousands of American families. Workers at Amazon’s distribution-center warehouses, CNN reports, take home about $24,300 a year. That’s barely more than the official poverty line for a family of four and far less than what Walmart pays.

We don’t know what exactly Bezos has in store for The Washington Post. His PR people declined to make him available for interviews following the announcement of last week’s sale, which included the mogul’s official promise to not interfere in the newspaper’s daily operations.

No surprise there. The Post editorial line already meshes quite smoothly with the Bezos worldview, liberal-ish on cultural issues, dependably conservative on anything — like the labor movement — that poses any serious potential threat to America’s deep pockets.

So what’s new? America’s most powerful newspaper publishers have always been partial to the privileged.

But we’ve had exceptions, publishers who remind us how great newspapers could and should be wielding their power. The most eloquent of these public-spirited publishers? That may well have been Joseph Pulitzer, the idiosyncratic and widely revered force behind the St. Louis Post-Dispatch and New York World.

In his 1907 retirement address, Pulitzer urged his successors to “always oppose privileged classes and public plunderers, never lack sympathy with the poor, always remain devoted to the public welfare, never be satisfied with merely printing news, always be drastically independent, never be afraid to attack wrong, whether by predatory plutocracy or predatory poverty.”

Don’t expect any credo like that to appear on the Washington Post’s masthead anytime soon. In his home state of Washington three years ago, Jeff Bezos played the predatory plutocrat to the hilt. He helped bankroll the defeat of a ballot initiative that would have cut taxes on average families and modestly raised taxes on the rich — like himself.