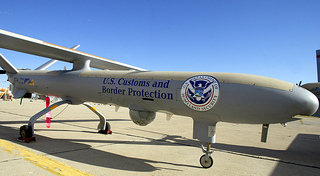 War profiteers have spied a new place they can militarize with their high-tech, high-cost weaponry.
By Jim Hightower | August 7, 2013

At last, both Republicans and Democrats are beginning to respond aggressively to economic needs. “It has been a tough time,” admits one Washington insider, applauding a new spending proposal that “could help out.”

Unfortunately, he and Congress aren’t referring to your tough times. No, no — they’re rushing to the aid of the multi-billion-dollar Military-Industrial Complex.

The government, you see, hasn’t been getting our nation into enough wars to satisfy the insatiable appetite of Northrop Grumman and its ilk for government money. So those war profiteers have spied a new place they can militarize with their high-tech, high-cost weaponry: The U.S.-Mexican border.

These corporate predators are deploying an army of lobbyists to Congress to target what they see as a booming market. “Border security!” is their battle cry.

A platoon of corporate lobbyists embedded their specific wish lists directly in the Senate bill, mandating brand-name purchases. For example, the bill requires the Border Patrol to buy six airborne radar systems from Northrop at $9.3 million each and 15 Black Hawk helicopters from Sikorsky at $17 million apiece.

What we have here is the emergence of a new hybrid monster: a Border-Industrial Complex pushing a permanent, ever-expanding border war.

How long before they use the cry of “terrorism!” to militarize the Canadian border, too? And after that, my guess is they’ll want to seal off those pesky anti-war radicals in places like Vermont.