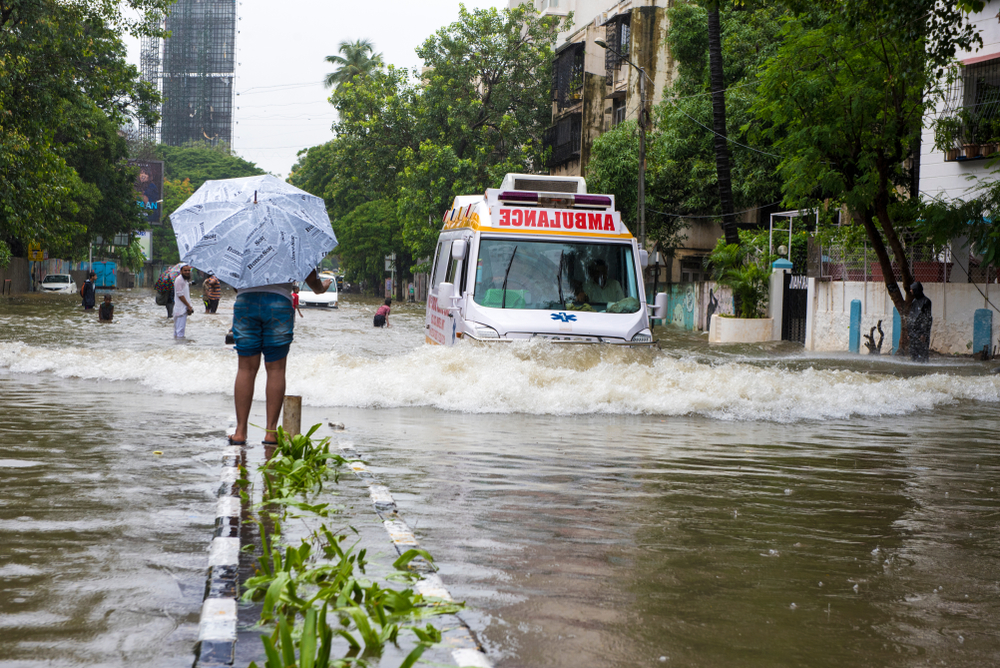 An ambulance races through a flood in Mumbai, India (Shutterstock)

The Climate Crisis Is Also a Health Emergency

For already vulnerable populations, the health risks of extreme weather events can be deadly.
By Olivia Alperstein | June 12, 2019

Rising global temperatures are intensifying the effects of extreme weather events across the United States and around the world. Wildfires, hurricanes, tornadoes, tsunamis, floods, and severe storms are becoming the norm, not the exception.

Extreme heat can cause cardiovascular, cerebrovascular, and respiratory effects, and even death.  Urban heat islands amplify impacts on cities, while long hours in the heat put farm workers and other outdoor laborers at severe risk too.

Extreme cold can cause hypothermia, cardiovascular and respiratory illnesses, and (as with heat) death. Prolonged exposure due to homelessness or housing insecurity puts transient populations at extreme risk for cold exposure in particular.

Then there’s hunger, which twice as many people are at risk of suffering by 2050, due to droughts and infectious diseases.

“Climate change is already contributing to the burden of disease and premature mortality,” reports the European Academies Scientific Advisory Council. “Without prompt and effective action, the problems are forecast to worsen considerably.”

Too many communities are still recovering from extreme weather events, only to get hit again — and again, and again. From flooded farmlands in the Midwest to rising sea levels on the coasts, communities across America face the loss of their livelihoods, homes, and lives, with little time to recover before the next disaster strikes.

The challenges are starker still in places already facing limited access to health and medical resources. A lack of health insurance and local doctors, plus poverty and remote locations, makes access to care particularly difficult for the majority of rural Americans, who may have to travel several hours to the nearest provider.

Many of these areas are highly vulnerable to natural disasters. In California alone, according to McClatchy, more than 2.7 million residents live in “very high fire hazard severity zones,” at risk of devastating wildfires like the Woolsey Fire or Camp Fire.

Indeed, thanks to climate change, natural disasters are claiming even more lives. Who gets hit hardest?

Particularly at risk are low-income communities, who already have limited resources to respond. So are people of color, who disproportionately experience not only the impacts of climate change, but also exposure to pollution, methane emissions, and toxins.

LGBTQ people on the margins of society, particularly LGBTQ youth — who face discrimination and violence at high rates — are more likely to experience homelessness, exposing them disproportionately to extreme heat and cold.

In short, the climate crisis is a health crisis. That’s why organizations like Physicians for Social Responsibility are mobilizing with everything we’ve got to tackle this like any other health emergency.

With a coordinated mass response from everyone from health care providers to policy makers to ordinary citizens, we can save our future. Our communities are already paying the price every second we fail to act swiftly and comprehensively.

This threat is literally in our backyards.