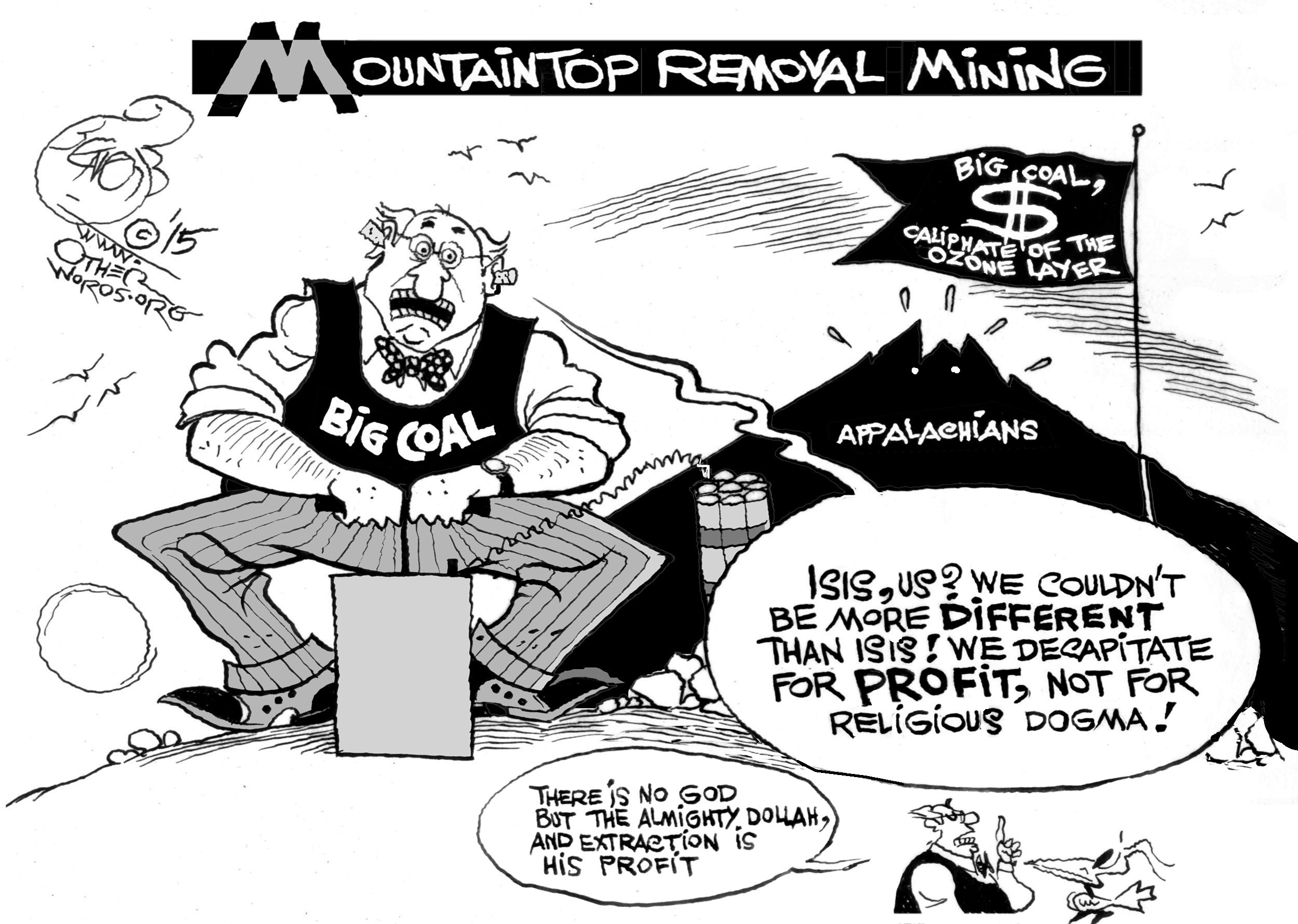 The industry is still wrecking the Appalachians as it withers.
By Emily Schwartz Greco | April 29, 2015

Nearly three-quarters of the coal extracted from West Virginia, Virginia, and Kentucky these days is being mined at a loss. The number of coal companies declaring bankruptcy or edging toward it is mounting.

That’s good for people and the planet. Burning coal fuels climate change, causes cancer, and spreads asthma. And yanking coal out of the ground wrecks the places where it’s found.

You might figure that low prices and declining demand would make mountaintop removal mining — one of the worst crimes against nature and humanity big business has ever committed — less of a threat to surrounding communities.

That would be nice. As it turns out, the people who live on the frontlines aren’t catching a break yet.

If you’re unfamiliar with the mechanics, picture this: Thick forests of trees growing on peaks get mowed down. Explosives decapitate mountains. A jumbled heap of crushed rocks and dirt laced with the remains of dead animals and plants choke valleys. Entire ecosystems, villages, and graveyards vanish. Rivers and streams are poisoned or smothered.

The amount of strip-mined coal has fallen by 60 percent across Appalachia since 2008. But the most extreme form of strip-mining, which reduces verdant mountainsides into rubble-strewn dead zones, is encroaching more than ever on adjacent communities. 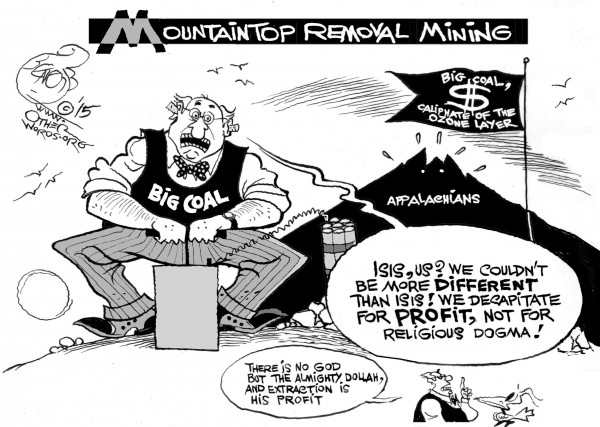 The non-profit group Appalachian Voices reached that conclusion by scouring Google Earth Engine’s highly specialized maps in an innovative new study. Why did people on the ground need fancy imaging systems to sharpen their focus on what’s going on in places like Inman, Virginia?

“Only from the air can you fully grasp the magnitude of the devastation,” wrote University of Kentucky professor Erik Reece of what he’s witnessed on flights above the Appalachians. “The desolation stretches like a long scar up the Kentucky-Virginia line, before eating its way across southern West Virginia.”

I half-dreaded, half-hoped to at least glimpse these wastelands during a recent family road trip around West Virginia’s New River Gorge.

Most of the massacred mountains are far from public roadways. Even when we veered off beaten paths, we saw lots of hawks, wild rhododendron, and waterfalls, but no manmade plateaus. So I bought a copy of Coal Country at a Charleston bookstore.

It’s a collection of haunting essays about mountaintop removal mining by Reece and other outraged Appalachian activists. Companies like Arch Coal and Alpha Natural Resources were pulling big profits in 2009, when the book came out, which the industry used to justify this assault on mountains.

What a difference six years make. Arch lost $113 million between January and March. Its shares sell for about a buck, down from their $75 peak. And the company might not manage to repay the $5 billion it owes creditors, the Moody’s rating agency suggests.

It takes huge machines for Arch and its competitors to decimate mountains, carve out the coal, and render the land uninhabitable. Those 80-ton bulldozers are pricey. Companies, therefore, usually borrow to pay for their mountaintop removal mining operations.

Coal powered the industrial revolution and kept the lights on for billions of people over the past century. As it collapses, remember that the industry’s pain can’t compare with the suffering it brought to the people and creatures who make their homes in the world’s most ancient mountains.

“When I was a kid, down at the bottom of the mountain, I could get crawdads, pick them up out of the water with my toes,” the late activist Larry Gibson wrote in Coal Country about his West Virginia homestead. “Now, nothing lives on the land. What they’ve done is irreversible. You can’t bring it back.”