The Cure for A Taxing Allergy

Millions of families live in constant dread of what an unexpected encounter — with a bee or a food additive or even a dye — could bring. One slip, and breathing could quickly become difficult, or a heartbeat dangerously low.

But nobody has to die from an allergic reaction in our modern world. We have medical devices that can keep children and adults alike safe.

The most familiar of these — the EpiPen — works as an auto-injection. By jamming a “pen” into their thigh, sufferers can dispense an exact dosage of epinephrine, a cheap generic drug that can relieve extreme discomfort and severe symptoms.

Medical authorities now recommend that folks with severe allergies have two EpiPen devices available at all times. That used to be a relatively affordable proposition. Not anymore. 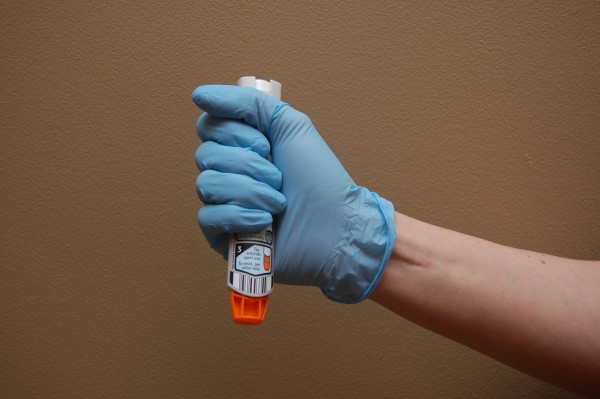 In the United States, the EpiPen wholesale price for a two-pen set has jumped from under $100 in 2007 to over $600 this past May. One Virginia mom recently tried to fill a prescription for two EpiPen two-packs and the cost totaled $1,212. Her health insurance, with a $4,000 deductible, wouldn’t have paid a cent of that.

So what’s driving up the EpiPen cost in America? Corporate greed.

This latest greed grab began in 2007 when the drug company Mylan bought the EpiPen franchise and started raising the price amid a huge new marketing campaign. The profit margin on EpiPens soared. Revenue from EpiPen sales soared, too, from $200 million to over $1 billion.

In effect, Mylan execs have been emptying the pockets of allergy sufferers to make themselves considerably richer.

We treat muggers who empty people’s pockets as criminals. Maybe we need to think of Mylan’s top execs as criminals, too. The first step in a criminal investigation: identify motive and opportunity.

The Mylan execs certainly have opportunity. We’ve allowed the drug industry to become a playground for corporate quasi-monopolies, enabling them to essentially charge whatever they want. They also have motive. The more they gouge consumers, the greater their personal windfalls.

Drug company executives didn’t have that same powerful motive in 1977, the year the EpiPen first appeared. Back then, corporate executives paid 70 percent of their income over $200,000 — that’s about $800,000 in today’s dollars — in federal tax.

Tax rates that high dampened the incentive for price gouging and other outrageous CEO behaviors. With the IRS standing in the wings, ever ready to tax away ill-gotten gains, corporate execs spent more time doing their jobs and less time conspiring to become incredibly rich.

Today, corporate officials pay taxes at less than half the rate they paid in the 1950s. Our political system seems to have developed an allergy to taxing high incomes at high rates.

An EpiPen for that could save us all from a dangerous reaction.

Sam Pizzigati, an Institute for Policy Studies associate fellow, co-edits Inequality.org. His latest book is The Rich Don’t Always Win: The Forgotten Triumph over Plutocracy that Created the American Middle Class, 1900-1970. Follow him on Twitter @Too_Much_Online. Distributed by OtherWords.org.