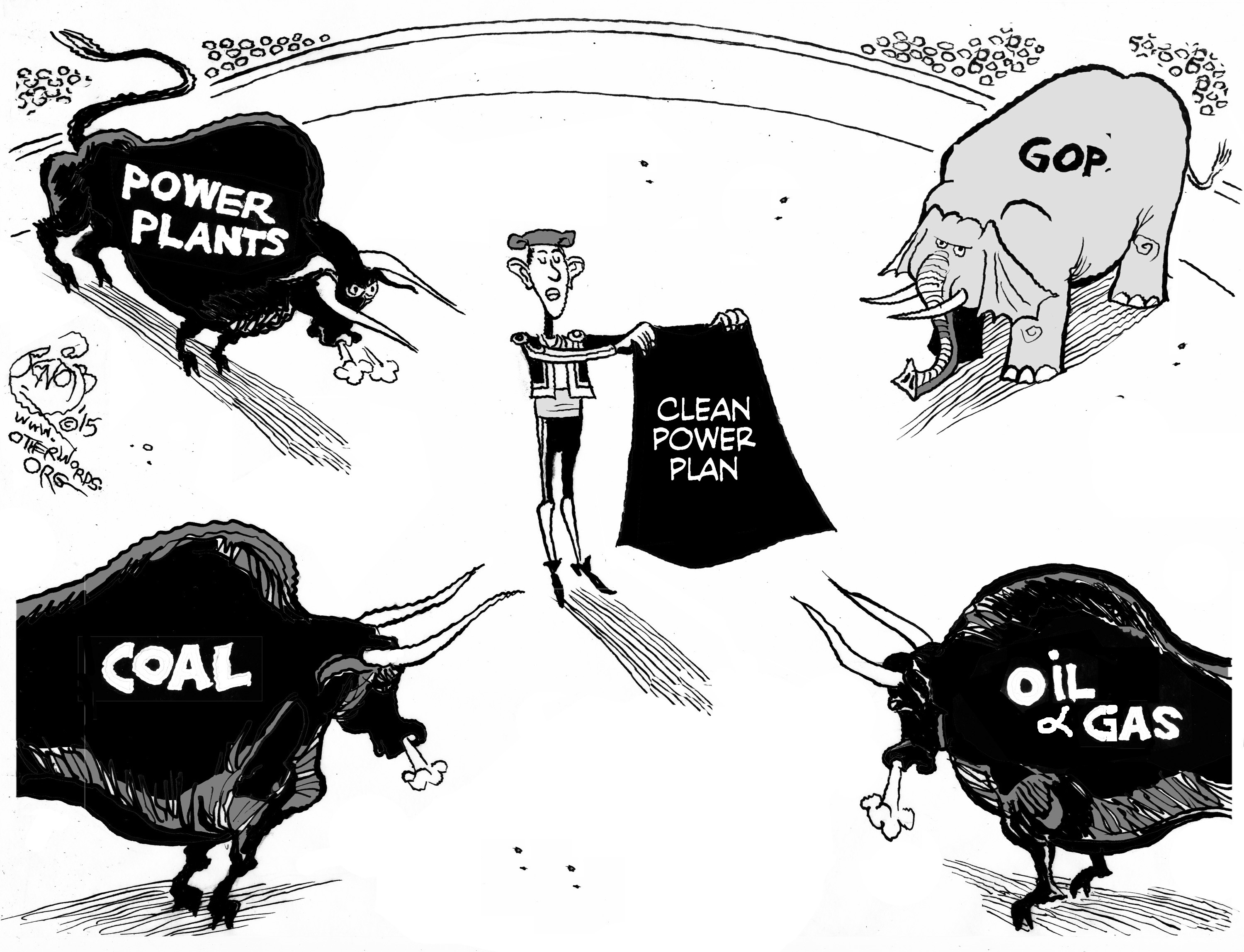 The Clean Power Plan Enters the Ring, an OtherWords cartoon by Khalil Bendib

The Drill Is Gone

GOP hopefuls are paying close attention to energy policy even if they’re mum about it.
By Emily Schwartz Greco | August 12, 2015

This country produced 3.2 billion barrels of oil last year, up 75 percent from 1.8 billion in 2008. The boom helps explain why, as the 2016 Republican presidential candidates sparred in their first official debates without saying much about energy, barrels of our black gold were on the verge of striking a six-year low of $43.

When supply spiked, demand lagged. As the laws of economics dictate, oil prices plunged. With the coal industry reeling and natural gas prices receding, fossil fuels are in their biggest freefall since, well, the 2008 electoral cycle. 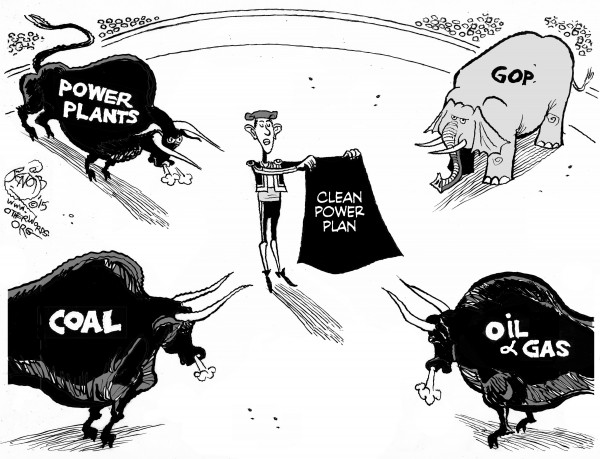 The Clean Power Plan Enters the Ring, an OtherWords cartoon by Khalil Bendib

Big Oil’s profits are plunging. Some 150,000 oil workers have lost their jobs. The population of Williston, North Dakota — the drill, baby, drill capital — is shrinking. No wonder the GOP candidates don’t want to discuss their energy policies.

Members of the climaterati also groused about the hopefuls’ general silence on global warming. Here’s all the candidates said in the main event and the “kiddie table” warmup debate:

Senator Lindsey Graham of South Carolina, the most climate-conscious Republican in the race, supports the pollution-generating Keystone XL pipeline’s construction anyway. So does Jeb Bush.

Many pertinent terms and words went unspoken, including global warming, carbon, wind, solar, coal, Koch Brothers, Clean Power Plan, renewable, arctic, and drill. Yet many of the GOP hopefuls’ top donors made fortunes in these industries. There’s no denying that fossil fuels are on their minds.

Those donations are chump change next to the $900 million Charles and David Koch say they’ll spend through their own oily political network on candidates and other political efforts during the 2016 election cycle. As refineries and petrochemicals are two big moneymakers for the rich brothers’ privately held conglomerate, saving dirty-energy’s dominion is a big priority for them.

Although Obama’s climate record doesn’t match his forceful rhetoric about global warming, a Republican victory in 2016 could slow U.S. progress toward a fossil-free future. But with Donald Trump refusing to cry in his caviar if he loses, how is that even possible? The Donald intends to run as an independent unless he becomes the nominee or he likes the nominee and feels — irony alert — that he’s being “treated with respect.”

Trump has alienated too many big constituencies, including people of color and women, to win if he headlines the GOP ticket. If he runs as an independent, he would surely siphon off enough angry and alienated voters to guarantee a Democratic Party victory.

Progressives determined to see decisive climate action and other non-Republicans can probably skip the rest of the GOP’s debates aside from the fun factor. Witnessing former Arkansas Governor Mike Huckabee call for raising taxes on “prostitutes, pimps, and drug dealers” or hearing him declare that the “the purpose of the military is to kill people and break things” is entertaining if you like that kind of thing.

Besides, you never know when someone will blurt something out as telling as “drill, baby, drill.”