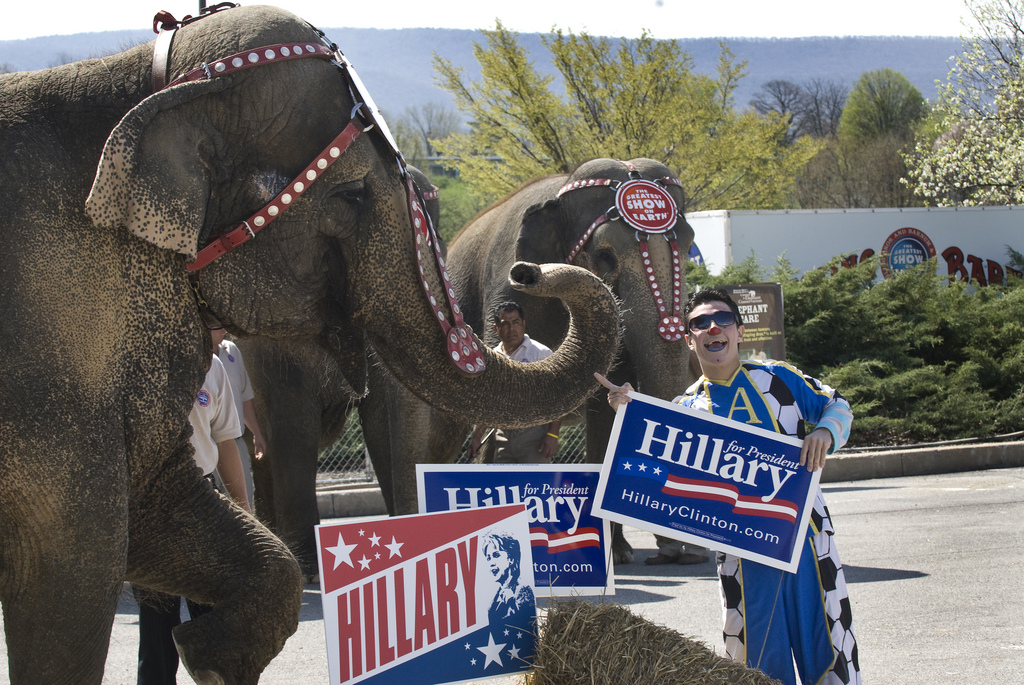 The Elephant in the Race

The audience in the theater takes its seats and slowly settles down. The curtain rises on a conventional living room in a conventional American home, neither squalid nor opulent. Middle class, it whispers.

A woman of a certain age sits in a chair in the middle of the room, reading a book. In a dimly lit corner, unnoticed at first, is a fully grown elephant, munching hay.

Enter a somewhat disheveled, gray-haired man. He sits in the chair to the left of the woman and begins to read a newspaper. Soon, however, he peers into the corner and does a double take.

“Hillary,” he says, sotto voce. “I don’t want to alarm you, but there’s an elephant in the room.” 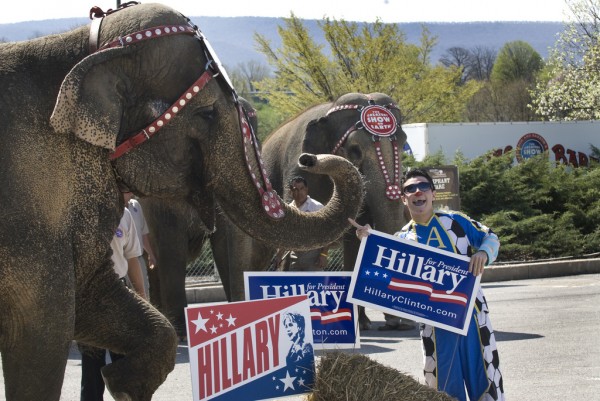 “I mean it. Look, right there in the corner. That gray thing eating hay. It’s huge.”

“Hillary, listen to me. I’ve been to the zoo, I know elephants and that’s one.”

“What are you talking about?” the man shoots back. “Some piggy banks look like elephants, but that’s no piggy bank.”

“This isn’t that kind of bank,” Hillary answers. “You don’t put money in it, you take it out.”

“You mean like an ATM? You go to it whenever you need a hundred or so and it gives it to you?”

“No interest,” she explains. “You don’t even have to pay it back. It’s for goodwill.”

“Surely you have to do something for all that money,” the man sniffs. “Two hundred twenty-five thousand clams buys a lot of goodwill in the goodwill market.”

“Sometimes I give a little speech. Sometimes I just read material they give me,” she shrugs. “You know me, I’ve always depended on the kindness of strangers.”

“This sounds like a scam to me. We should get rid of that thing before it goes berserk and tramples on all of us.”

“Nonsense. We’ve got it under perfect control. It’s very well behaved. Besides, he’s too big to get rid of. Look at him.”

“Yeah, huge. That’s why we have to get rid of it. If it collapses we’ll all be crushed.”

“How are two little people like us going to get him out of the door?” she asks skeptically. “I mean, really.”

“We’ll get help.” He goes to the window and throws it open, sticks his head out, and yells: “Listen up, people! We’ve got an emergency here. There’s an elephant in the room. We need your help to get rid of it. Come over as fast as you can, and bring ropes.”

“I don’t think so. No one was listening. There’s a strange bunch of guys out there having an argument.”

“Are they from around here?”

“No. They’re milling around calling each other liars. One of them had a really weird haircut and another kept saying his father was a bartender and his mother was a maid, like that meant something. I didn’t get it.”

“Must be one of those cults — a Rush Limbaugh fan club or something. We’ll call Homeland Security. They’ll take care of it.”

“But what about the elephant?”

“What about all the people who don’t have an elephant?”

“I feel their pain. Now quit making such a fuss.”

The man sits back in his chair with a resigned shrug. The elephant screams. The curtain falls.

Eat your heart out, Arthur Miller.