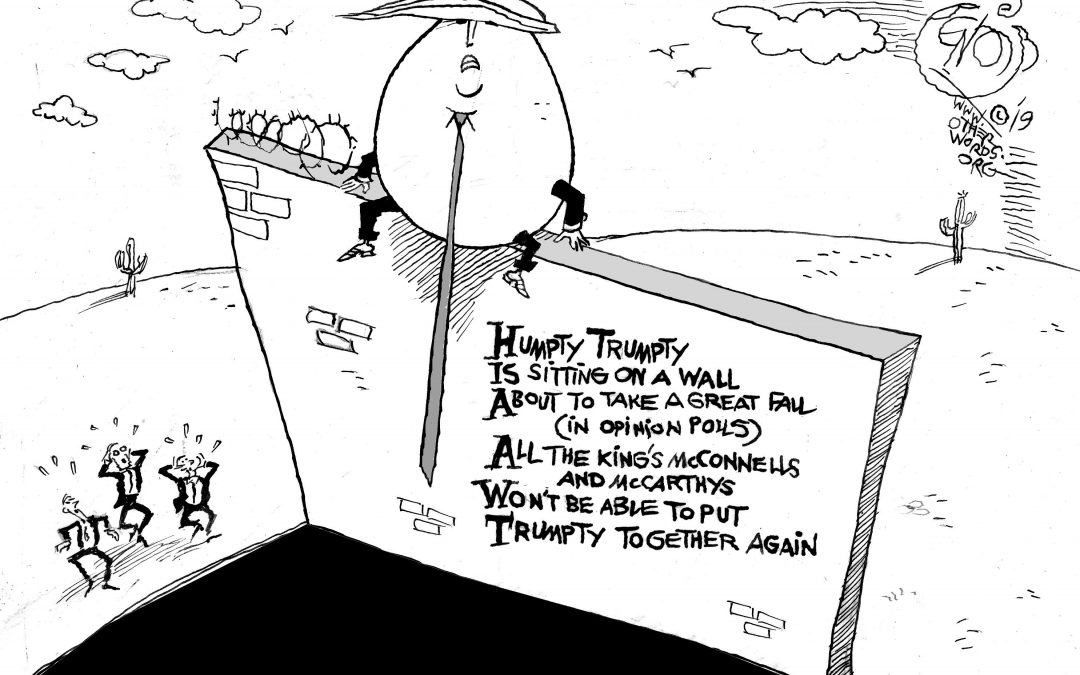 The Embarrassing Fall of Trump’s Wall

A climbing group in Kentucky built a replica of Trump’s wall. One climber topped it in 13 seconds. Another did it while juggling.
By Jim Hightower | February 26, 2020

However, for a real-life, epic story about wall troubles, ponder the trials and tribulations of our very own president. He can’t seem to get his “big beautiful wall” funded or even taken seriously, much less built.

Trump has continuously demanded that Congress shell out more than $10 billion taxpayer dollars to erect a monster of a wall across some 2,000 miles of the U.S. border with Mexico, ranting that his magnificent edifice would keep “aliens” from entering the U.S. from the south.

But even when his own party controlled both houses of Congress, his grand scheme went unloved, unfunded, and unbuilt. Still, he persists.

In January, he directed officials to put up a demonstration section of his 30-foot-tall wall to show the world how effective the Trump bulwark would be. But the thing blew over! Not from a hurricane-force storm, but from moderate winds topping out at only 37 miles an hour.

More embarrassing was a personal visit Trump made to San Diego last September for a media event hailing a new supertech model of wall that he declared would be “virtually impossible” for violators to climb, signing his name on the structure. “I tell you this strongly,” Humpity-Trumpity said, “No more people can come in.”

But a climbing group in Kentucky built a replica of that wall and held an up-and-over competition — the winning time was 13.1 seconds! Dozens of competitors easily topped it, including an eight-year-old girl and a guy who climbed it one-handed while juggling various items with his other hand.

Trump has, however, proven that one thing truly is impenetrable: his head. Absolutely no embarrassment, logic, or factual evidence can enter his locked mind and show him how silly this extravagant folly is.