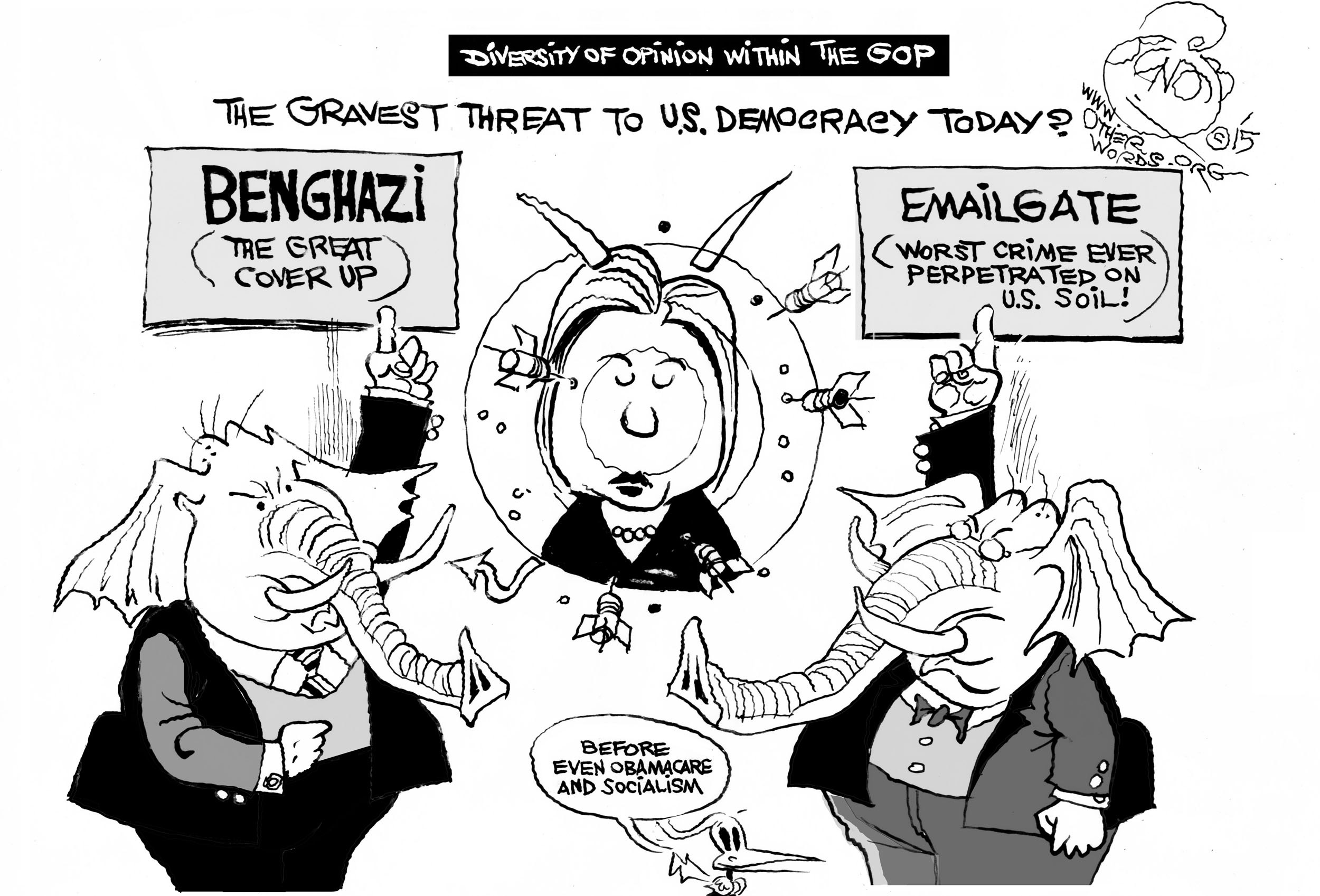 The Debate Dividing the GOP, an OtherWords cartoon by Khalil Bendib

The GOP Agenda (Or Lack Thereof)

Not climate change, not the growing gap between the filthy rich and the deserving poor, and not our crumbling roads, declining schools, or tattered justice system — just Hillary’s emails.

As secretary of state, Clinton used her own private email account for government business and personal stuff. Some messages may have contained classified material (whether it was classified before or after she sent it is in question), making the Democratic Party’s presidential frontrunner appear to have improperly routed government secrets through a privately maintained, non-government server.

None of that looks good, of course. At best it’s very sloppy.

The Republicans, however, are trying to make it seem like the greatest act of treason since Benedict Arnold tried to sell out West Point to the British. It’s part of their grand plan to strangle Clinton’s presidential candidacy in its crib. 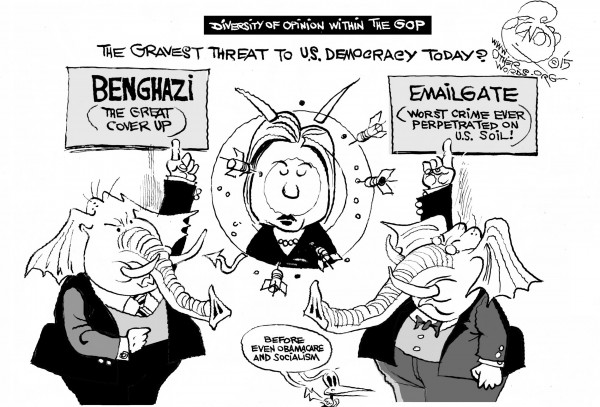 The Debate Dividing the GOP, an OtherWords cartoon by Khalil Bendib

And maybe it will work. Republicans have a way of hammering on an issue, saying the same things day after day, even when the facts are against them. Eventually people say, “Gee, maybe there’s a fire there behind all that smoke.”

Why did Clinton do it? She says it seemed more convenient. Earlier this year, she claimed it was because she didn’t want to carry two phones around with her everywhere she went.

That’s lame. A secretary of state is constantly surrounded by dozens of minions who can carry an unlimited number of phones for their chief.

Why did she really do it? I have no idea. It’s precisely the kind of slightly off-center move we’ve come to expect of the Clintons. Their transgressions never seem to add up to much, but they leave you wondering if there’s something shifty going on

Now that she’s finally apologized for using a private email server, the Republicans will forgive her and forget about it, right?

Hardly — I misspoke before. The emails aren’t the only thing Republicans talk about. There’s also Benghazi.

Benghazi is a tragic chapter in our recent history. A U.S. ambassador and three of his aides were murdered in a terrorist attack on their compound in the Libyan city of Benghazi in 2012. Clinton led the State Department at the time.

It was by any measure a classic security screw-up, the kind that happens from time to time. Not much is made of it unless Hillary Clinton is secretary of state.

But she was, so the Republicans can’t let go of it. Rumors have been floated of the secretary interfering with the security at the compound, ordering the military to stand down, even running guns out of the facility. All garbage, of course, but an opportunity to slime a potential political opponent is no time to go ethical.

Republican-controlled standing committees in Congress have conducted no fewer than eight investigations into the matter so far, all fallow. Not satisfied, Republicans formed a special committee to investigate the incident.

That was 16 months and $4 million ago. Now they’ve discovered that some of Hillary’s emails mentioned — you guessed it — Benghazi. That means more hearings on the way.

This from a Congress that’s just come off one of its interminable vacations and given itself 12 days to vote on the Iran nuclear deal, pass a complex spending bill, and stage a welcome party for the pope. Then our lawmakers will go on vacation again so they can go back home and tell voters what a bang-up job they’re doing.

A hardy band of Republicans is threatening to refuse to vote for any spending bill that provides federal health care money for Planned Parenthood, which among other things provides abortions for poor women (though not with federal funds).

They say that if their demands aren’t met, they’ll shut down the government.

That’s it, then. Hillary Clinton’s emails, Benghazi, and Planned Parenthood. Solve those and all our troubles are over.