Patients vs Profits, an OtherWords cartoon by Khalil Bendib

Our health industry's big players focus on making as much money as possible.
By William A. Collins | August 21, 2013

Getting well
Takes lots of pluck,
With health guys out
To make a buck.

As the Obama administration struggles to keep rolling out its landmark Patient Protection and Affordable Care Act amid partisan squabbling, the shortcomings of American health care are more evident than ever.

Our system is very different from other countries: It’s worse.

The reason is simple. Most nations focus on keeping people as healthy as possible. Elsewhere, the government organizes the system, and the providers — hospitals, doctors, drugmakers, and insurance companies — focus on healing and prevention.

Here, the health industry’s big players focus on making as much money as possible. The providers devise the system, making profits a high priority. 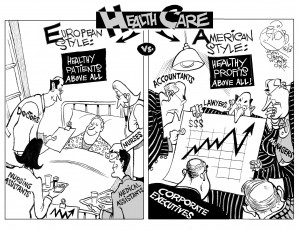 Patients vs Profits, an OtherWords cartoon by Khalil Bendib

Patients that can’t contribute to profit margins are shunted off to government services or ignored. Even Medicaid — a key part of our safety net for the poor — imposes restrictions, is rife with waiting lists and faces budget shortfalls. Increasingly, patients are grappling with a shortage of physicians willing to play ball.

As a result, Americans die younger than our counterparts in other rich countries.

The single biggest impediment is the bizarre fact that one of our major political parties has sworn to uphold the rights of the profiteers.

Fortunately, the main offenders can be clearly labeled. Chief among them are the health insurers and the drug manufacturers. Big Pharma wields an army of lobbyists and administers large doses of campaign contributions to their friends in Congress.

But at least insurers and drugmakers are clear-cut enemies. Harder to deal with are our friends — the hospitals, doctors, clinics, etc. — whom we know personally. It’s fun to have dinner with them, but is that colonoscopy every five years — or that supplemental “just to be on the safe side” CAT scan — really necessary?

The network of handshakes and private agreements that links hospitals to medical device manufacturers and drug reps inflates our health cost just as much as the insurers and Big Pharma.

Why should health care be so profit-centered in America?

In most countries, some sort of universal and Medicare-like system prevails, with equal coverage for everyone. Sometimes individuals pay in. Sometimes it’s all done with taxes. In some places, the government owns the whole works, while in others, it contracts out. But in all cases, there are careful limits on costs and enough health care for everyone.

Here, the Medical-Industrial Complex is America’s biggest industry. Our health laws are a minefield of loopholes and special privileges.

The ideal solution isn’t President Barack Obama’s Patient Protection and Affordable Care Act, which just makes our current system a little bit less dysfunctional. It’s a single-payer system, such as a Medicare for all.

Somehow, this seems imperative to acquire but impossible to achieve.

By William A. Collins