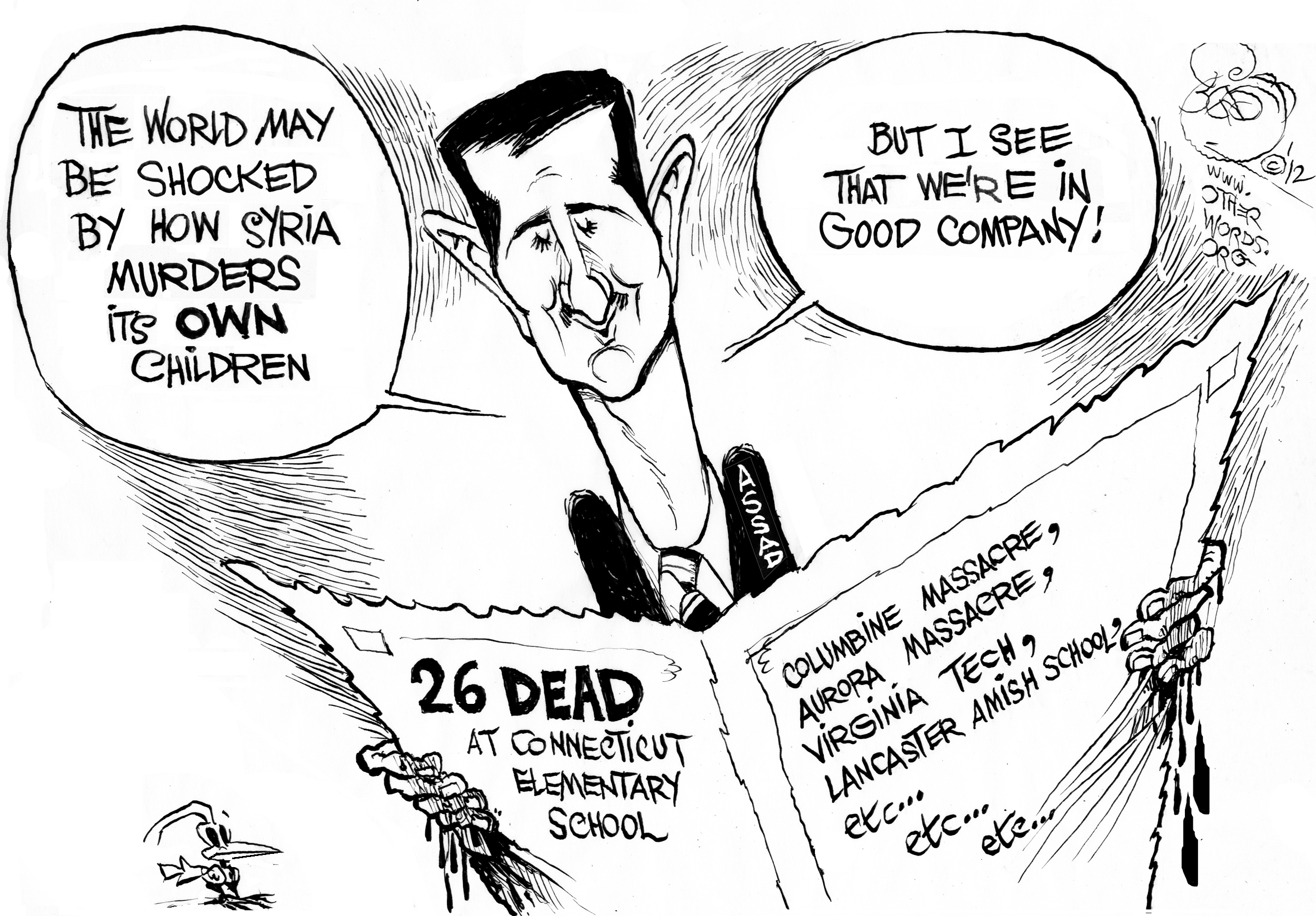 The New Agenda on Guns We Need after Newtown

This time, the debate has to be about more than not offending the NRA's sensibilities.
By Donald Kaul | December 19, 2012

Think of it: I was spared writing about the presidential election, an event so vacuous it made reality TV seem interesting. If there was any serious discussion of an important national issue — global warming, our obesity epidemic, transportation policy, the morality of drone attacks on civilian populations, the environmental consequences of fracking, existential implications of the designated hitter — I missed it.

Instead, we got a campaign of misrepresentations, exaggerations, and outright lies. The Republicans were by far the worst offenders but President Barack Obama didn’t cover himself in glory either.

I was happy with the result of the presidential election but I didn’t regret not covering it. And I was entirely content to go on not writing about things. (If I could make a living at that, life would be perfect.)

But then Newtown happened. A misanthropic young man who never seemed particularly violent killed his mother and then broke into an elementary school and massacred little kids, teachers, and the principal. 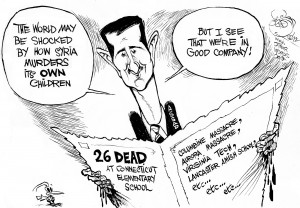 And the very air changed. The holiday season suddenly turned somber. You looked at the small children around you differently, as fragile, precious gifts to be cherished and, above all, protected.

Obama struck that note in his moving speech at the memorial service. Speaking for us all, he said: “We can’t tolerate this anymore. These tragedies must end. And to end them, we must change.”

Nice words but somehow, not enough. Not nearly enough.

That’s when I figured I should write a column about it. During my 50-year career, every time some demented soul would take a semi-automatic gun and clean out a post office, a school, or a picnic, I’d get up on my soap box let loose with a withering diatribe about guns, the National Rifle Association, and weak-kneed politicians. Did it about 75 times, give or take.

And in every case the main effect was a spike in gun sales.

Still, I thought I’d give it one more shot…er, chance.

Obama’s speech was fine as far as it went but it didn’t go very far. Neither have any of the other responses I’ve heard.

California Senator Dianne Feinstein said she was going to introduce a bill to ban the sale and importation of assault weapons. Great, but the bill wouldn’t apply to weapons already out there and in defining illegal weapons it listed more than 900 exceptions.

The thing missing from the debate so far is anger — anger that we live in a society where something like the Sandy Hook Elementary massacre can happen and our main concern is not offending the NRA’s sensibilities.

That’s obscene. Here, then, is my “madder-than-Hell-and-I’m-not-going-to-take-it-anymore” program for ending gun violence in America:

Repeal the Second Amendment, the part about guns anyway. It’s badly written, confusing and more trouble than it’s worth. It offers an absolute right to gun ownership, but it puts it in the context of the need for a “well regulated militia.” We don’t make our militia bring their own guns to battles. And surely the Founders couldn’t have envisioned weapons like those used in the Newtown shooting when they guaranteed gun rights. Owning a gun should be a privilege, not a right.

Declare the NRA a terrorist organization and make membership illegal. Hey! We did it to the Communist Party and the NRA has led to the deaths of more of us than American Commies ever did. (I would also raze the organization’s headquarters, clear the rubble, and salt the earth, but that’s optional.) Make ownership of unlicensed assault rifles a felony. If some people refused to give up their guns, that “prying the guns from their cold, dead hands” thing works for me.

Then I would tie Mitch McConnell and John Boehner, our esteemed Republican leaders, to the back of a Chevy pickup and drag them around a parking lot until they saw the light on gun control.

And if that didn’t work, I’d adopt radical measures. None of that is going to happen, of course. But I’ll bet gun sales will rise.

OtherWords columnist Donald Kaul lives in Ann Arbor, Michigan. This is his first column since late July, the month he had a heart attack and decided to take a break. OtherWords.org