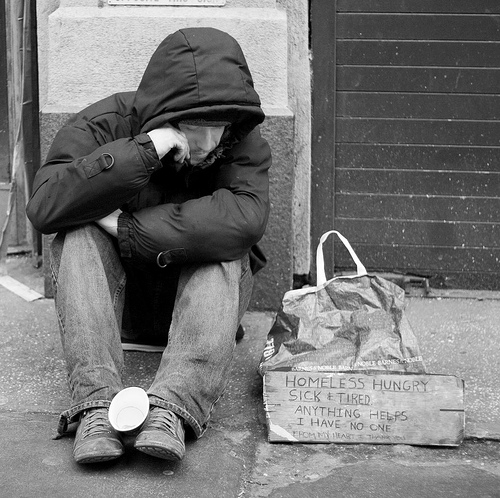 The New Crime of Eating While Homeless

By outlawing dumpster diving, Houston is making life impossible for the most vulnerable.
By Jim Hightower | May 22, 2013

Whenever one of our cities gets a star turn as host of some super-sparkly event, such as a national political gathering or the Super Bowl, its first move is to tidy up — by having the police sweep homeless people into jail, out of town, or under some rug.

But Houston’s tidy-uppers aren’t waiting for a world-class event to rationalize going after homeless down-and-outers. They’ve preemptively outlawed the “crime” of dumpster diving in the Texan city. 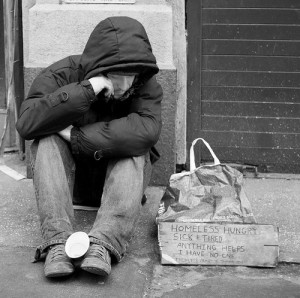 In March, James Kelly, a 44-year-old Navy veteran, was passing through Houston on his way to connect with family in California. Homeless, destitute, and hungry, he chose to check out the dining delicacies in a trash bin near City Hall. Spotted by police, Kelly was promptly charged with “disturbing the contents of a garbage can in the [central] business district.” Seriously.

“I was just basically looking for something to eat,” he told the Houston Chronicle. But, unbeknownst to both this indigent tourist and the great majority of Houston’s generally generous citizens, an ordinance dating way back to 1942 says that “molesting garbage containers” is illegal.

Also, in 2012, city officials made it a crime for any group to hand out food to the needy in the downtown area without first getting a permit. It’s a cold use of legal authority to chase the homeless away to…well, anywhere else.

Such laws are part of an effort throughout the country to criminalize what some call “homeless behavior.” And, sure enough, when hungry, the behavioral tendency of a homeless human is to seek a bite of nourishment, often in such dining spots as dumpsters. The homeless behavior that Houston has outlawed, then, is eating.

The good news is that when Houstonians learned of Kelly’s situation, many reached out to help him get through his hard times. Now they need to reach out to local politicos and get the city to stop cracking down on this abuse of homeless people.