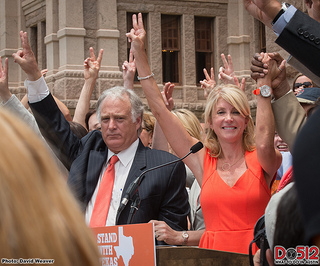 Wendy Davis's filibuster offered that rare occasion when the government's overreach into the most intimate details of our lives was made plain.
By Frances "Sissy" Farenthold, Susan Smith Richardson | July 3, 2013

Overnight, Texas State Senator Wendy Davis became the face of the pro-choice movement in her state and the entire nation.

When the Democrat from Fort Worth in pink running shoes filibustered  for nearly 13 hours in the Texas Senate on the last day of its regular session, she helped defeat a bill aimed at severely restricting access to abortion services in the state. And she stood up for all women. 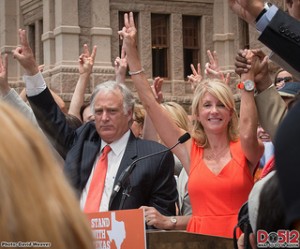 Davis accomplished what once seemed impossible in Gov. Rick Perry’s stronghold: She derailed, if only temporarily, the Republican steamrolling of women with a series of bad laws in recent years, including a measure that would gut reproductive health services for poor women across the Lone Star State.

To the media, she may symbolize the resistance. But the courageous and intelligent Davis has acknowledged that, far from standing alone, she’s riding on the shoulders of a “democratic movement.”

Behind the camera-ready blonde woman who filibustered an abortion bill in her pink Mizuno sneakers, elegant suit, and back brace was an army of men and women in orange T-shirts — the color selected by the state’s pro-choice supporters.

Many of those folks who stood in the long lines that snaked through the Texas Capitol the night of the filibuster, or the thousands who attended an outdoor rally — shielding themselves from the sun with orange parasols — were there because of long-term efforts.

Cries of “Wendy” may have thundered through the Capitol rotunda and shook the Senate gallery as the legislative session reached its climactic closing minutes amid Republican maneuvers to stop Davis’s filibuster. But it was an organized effort, coupled with an outpouring of people unaffiliated with any organization.

Together, these organized and spontaneous protests prevented the Senate from passing the Republican measure that would have set reproductive rights in the state back many years. They, together with Davis, forced Perry to call a special session of the Texas Legislature. The crowds returned a week later to testify against a new version of the abortion bill Davis had filibustered.

The chants and clapping hands that stopped the deliberations came from the people of Texas.

In a society that seeks an individual hero or shero to enshrine, it’s easy to overlook the mobilization behind Davis’s filibuster, as well as the participation of everyday Texans who turned the filibuster into a popular movement.

And it was no coincidence that throngs of Texans, who had been watching the legislative debate over this unpopular measure for months, streamed to the Capitol.

At the heart of all legislation designed to restrict women’s reproductive choice is the issue of privacy. Davis’s filibuster offered that rare occasion when the government’s overreach into the most intimate details of our lives was made plain. The people of Texas responded by taking back their government.

Far from standing alone, Davis is standing on the shoulders of an organized resistance, energized by an uprising of everyday Texans.

Frances “Sissy” Farenthold is a former Texas state representative and a past chair of the National Women’s Political Caucus. Susan Smith Richardson is the project director of the Frances T. “Sissy” Farenthold Archives Project at the Rapoport Center for Human Rights and Justice at the University of Texas School of Law.
Distributed via OtherWords. OtherWords.org