The Path We Should Follow after Syria Crosses the Red Line

Working closely with the United Nations could help Obama avoid the horrendous mistakes Bush and Clinton made.
By Don Kraus | May 1, 2013

President Barack Obama’s recent announcement that he believes Syria has used a small amount of chemical weapons ignited a debate. Has the Assad regime crossed the “red line” the White House laid down?

U.S. intelligence reports “varying degrees of confidence” that Syria used chemical weapons. “We have to act prudently,” Obama said. “But I think all of us…recognize how we cannot stand by and permit the systematic use of weapons like chemical weapons on civilian populations.”

The situation in Syria is clearly dire, with more than 70,000 deaths. Over 2.5 million Syrian refugees (including 600,000 children) have overwhelmed the ability of the United Nations and neighboring countries to provide adequate care. Another 2 million kids are internally displaced within Syria.

But politicians seem more concerned about U.S. credibility than suffering Syrians. So what’s next for Washington?

If I were president, I’d try to carefully navigate between two horrendous mistakes my predecessors made:

Fortunately, there’s a path between these two calamities. It runs through the United Nations and will require strong U.S. leadership. First, the president should reach out to Russia and China to secure a UN Security Council resolution that authorizes a UN inspection team with unfettered access within Syria to determine what’s actually going on there.

Syria has so far barred such a team from entering the country, calling assertions of chemical weapon use “a barefaced lie.” Syrian Information Minister Omran al-Zohbi has said his government didn’t trust the “qualifications” of inspectors from the United States or Britain but would accept Russian inspectors. So include the Russians. 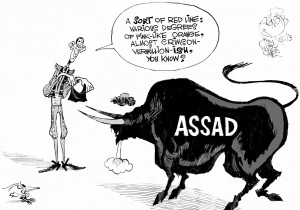 Obama and the Red Line, an OtherWords cartoon by Khalil Bendib

The UN agreement should lay down its own red line. If Syria bars international inspectors, then the next step would be a massive international intervention with four clear goals: Halt the fighting, secure the chemical weapons, allow free access for humanitarian aid and workers, and create the space for a political settlement of the conflict.

The intervention force should have participants from all major nations and regions including the United States, Russia, China and the Arab League states. Russian participation would require regime change to be off the table as an immediate goal. Future leadership could be left up to the Syrians to determine once peace is established.

Although Russia and China have vetoed resolutions on Syria in the past, Obama should be able to make the case that it’s not in Russia’s or China’s interest to have forces allied with al-Qaeda shatter Syria. Both Russia and China face radical Islamist problems of their own and should oppose allowing Syrian chemical weapons stockpiles to fall into the hands of jihadists. It’s estimated that the Jabhat Al-Nusra militia, which is affiliated with al-Qaeda, has as many as 5,000 Syrian rebels. According to Lakhdar Brahimi, the UN and Arab League’s Special Representative for Syria, they could be supported by a growing force of “30 to 40,000 foreign fighters.”

What’s the alternative to a UN inspection team backed up by the threat of an international deployment force? All sides lose as Syria’s civil war ignites more fighting in Lebanon, Israel, Iraq, and the rest of the region.

Working through the UN would allow Obama to gather more intelligence on who has used chemical weapons, spread the burden of protecting the Syrian population, secure some very dangerous weapons, and avoid a terrible regional war. It’s an option he should consider.