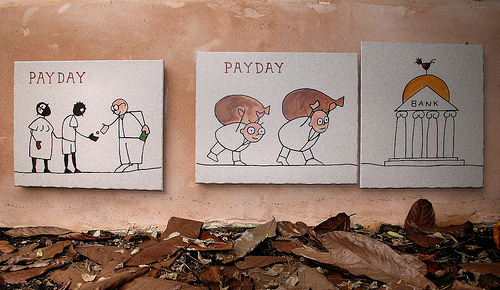 The Scourge of Siphon-Up Economics

Addressing inequality head-on will put our nation's wealth back where it belongs — with all of us.
By Marjorie E. Wood | September 24, 2014

When the Census released the latest data on inequality, most mainstream media outlets shrugged it off.

That’s quite a contrast from earlier this year when inequality was all the rage. Reporters were scrambling to write about it. In January, President Barack Obama made it the focus of his State of the Union speech. And Thomas Piketty’s 700-page book about inequality shot to the top of Amazon’s bestseller list in the spring. 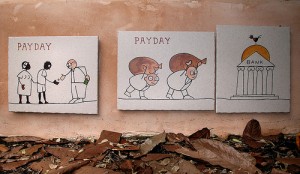 What do the new data say? The gulf between America’s richest and poorest is growing.

In 2013, the top 5 percent of households had an average income of $196,000 while those in the bottom 10 percent brought in only $12,400. The total number of Americans living in poverty remains at the record levels reached years ago: 45.3 million people.

And though the poverty rate for children edged down from 21.8 percent in 2012 to 19.9 percent in 2013, children remain far more likely to face economic hardship than either working-age adults or senior citizens. All signs point to inequality getting worse in the years to come unless something changes.

Maybe you think that sounds too grim to think about. But you should still care, and here’s why. The growing gap between the wealthiest Americans and everyone else is about much more than dollars. It’s about everything that matters to you most — your kids, their education, your family’s health, your community, your quality of life, and the democracy you live in.

Growing inequality is damaging all of these things. As the rich get richer, they gain more political influence that enables them to hoard their wealth. American corporations have turned tax avoidance into an art form, while 31 states no longer collect estate or inheritance taxes from millionaires and billionaires. A new report by Standard & Poor’s found that rising income inequality is itself responsible for declining state revenue.

That means federal, state, and local governments have trouble paying for public education, parks, highways, infrastructure, financial aid, and other social programs. It means that the quality of your community may decline. It means that your child may attend schools that are understaffed and over-crowded. Down the road, it means your child may have to take on massive debt just to attend the local state university.

As the rich get richer, they also disempower workers through union-busting, worker misclassification, wage theft, and lobbying against a minimum wage hike. Why? Because their wealth actually depends on your lack of mobility. For instance, 66 percent of low-wage employers in America are large, wealthy corporations who lobby against increasing the minimum wage.

In this “siphon-up economics,” the rich get richer by draining wealth from the rest of us. The new Census data reveal that since the late 1980s, incomes for the bottom half of Americans have stagnated while those of the top 10 percent have steadily climbed.

And the people hogging the pie are also growing more powerful. Corporate lobbying is at an all-time high, and the Supreme Court is handing down decisions that enshrine the political influence of wealthy Americans.

As a result, your ability to make your voice heard is eroding.

As if that weren’t enough, inequality also affects life expectancy. A growing body of research shows that people at the top of the income scale are living longer while those at the bottom are dying earlier. Not surprisingly, more affluent counties tend to have more doctors, better preventative care and information, healthier lifestyles, and higher rates of health insurance coverage.

The next time you hear the word “inequality,” remember that it’s not just about a gap in income or wealth. It’s about everything you hold near and dear.

There’s only one way to ensure that our communities, our kids, our health, and our democracy can thrive. We must address inequality head-on and put our nation’s wealth back where it belongs — with all of us.