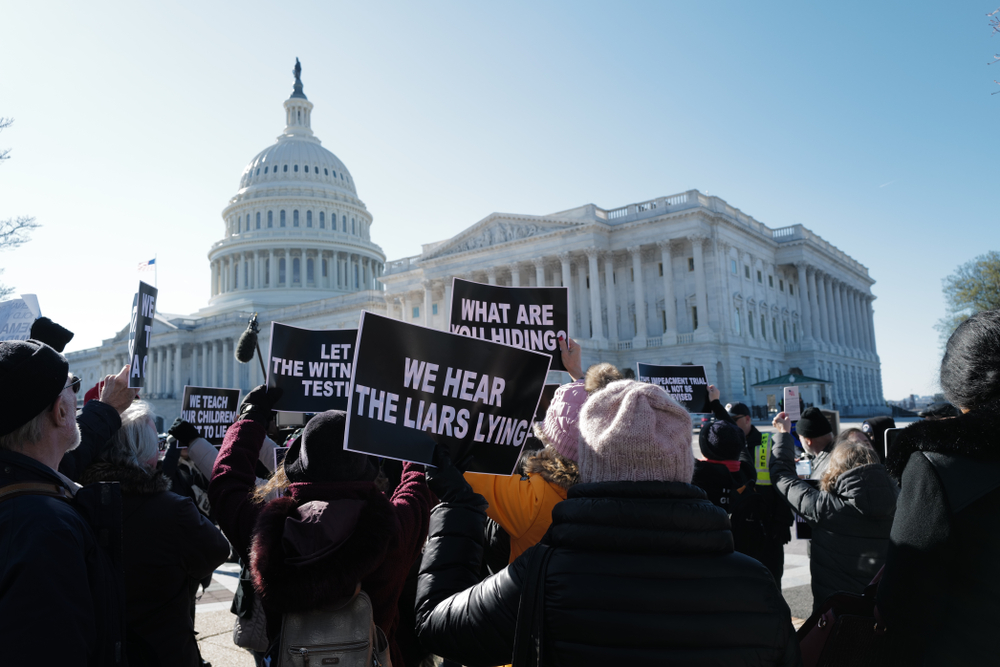 In my 40 years as a lawyer, I’ve never seen a trial flout the basic requirements for fairness so brazenly.
By Mitchell Zimmerman | January 28, 2020

President Trump is on trial.

As in a real trial, charges have been asserted: the House alleges high crimes and misdemeanors. A judge presides: Chief Justice John Roberts sits in his fine black robe at the head of the chamber. There are prosecutors (the House impeachment managers) and defense counsel (Trump’s “A-team” of lawyers).

And pursuant to our Constitution, the jurors — the members of the Senate — have sworn an oath to render “impartial justice” at the end of the trial.

So, it looks like a trial. Except that in my 40 years as a lawyer, I’ve never seen a trial that corruptly flouted the basic requirements for fairness as brazenly as this one.

In a real trial, any juror who admitted conspiring with the defendant would be unceremoniously ejected from the jury. Yet Republican Senate leader and sworn-to-be-impartial juror Mitch McConnell openly proclaims on television, “Everything I do during this, I’m coordinating with White House counsel.”

Only in Alice in Wonderland would we expect a verdict prior to jury deliberations —  or a juror like Republican Senator Lindsey Graham, who announced his vote before the trial began: “I am trying to give a pretty clear signal I have made up my mind. I’m not trying to pretend to be a fair juror here.”

Still more bizarre is a “trial” where the jurors refuse to consider evidence. Ten Republican Senators proposed to dismiss the case without any proceedings, and McConnell is against having witnesses testify or produce documents.

A trial without evidence — the testimony of witnesses and documents — is a travesty of justice.

Just recently, we learned that John Bolton, Trump’s former national security adviser,  said that Trump privately admitted he was holding up aid to Ukraine until Ukraine launched investigations of Democrats. That’s the central charge of the House impeachment managers.

In a trial, the jury usually decides which party is lying by seeing how they hold up under cross-examination, which 19th century jurist John Henry Wigmore described as “the greatest legal engine ever invented for the discovery of truth.”

No wonder Trump’s men don’t want a real trial. The last thing they want is Donald Trump on the witness stand.

Instead, they argue that Bolton’s allegations should be ignored because “we do not deal with allegations that are not based on evidentiary standards.” Actually, that is precisely the reason his testimony should be heard: because it is evidence.

Is it too late to do anything about McConnell’s scheme to hastily absolve the president?

Well, a handful of Republican senators could turn the make-believe trial into a real one by insisting that witnesses and documents be subpoenaed and heard, voting against the false time limits on the trial, and taking the issues seriously.

The presiding judge, Chief Justice Roberts, could also act like a real judge.

He could challenge the presence on the impeachment trial jury of those who admitted they won’t provide the “impartial justice” they swore to render. And he could issue subpoenas and indeed even call witnesses on his own initiative, as required for a thorough and just adjudication.

Instead, Roberts seems to be fervently wishing he were somewhere else, perhaps trying to burnish the court’s little-deserved reputation for even-handed justice.

But Roberts can’t escape the battle over whether the Senate engages in a sham proceeding or an honest one. As the Constitution requires, he presides. If the Senate won’t do its constitutional duty to conduct a real trial, Roberts should make them.

Mitchell Zimmerman is an attorney and author of Mississippi Reckoning, a thriller and historical novel about the death penalty and the civil rights movement. This op-ed was distributed by OtherWords.org.