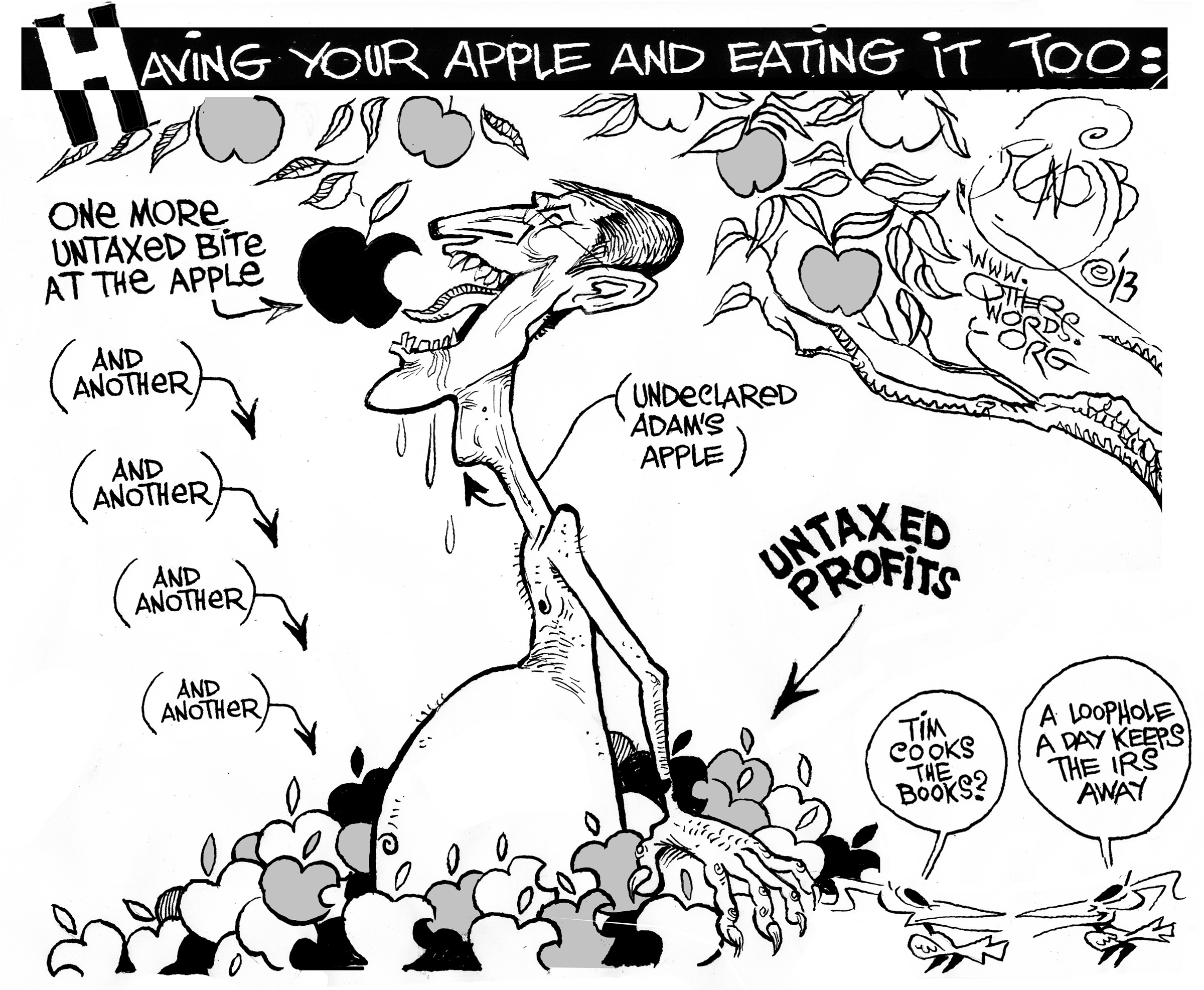 One More Untaxed Bite at the Apple, an OtherWords cartoon by Khalil Bendib

The Tradeoff Between Apple and Apples

There would be no need for our elected leaders to trim our safety net if our richest corporations didn't turn avoiding their fair share of taxes into an art form.
By Scott Klinger | July 3, 2013

In May, Americans watched as Apple CEO Tim Cook defended his company’s tax avoidance strategies before a Senate investigative panel. Prior to the hearing, Senate investigators released a report documenting Apple’s use of accounting gimmicks to shift $74 billion of profits to Ireland over the last four years.

During their testimony, Cook and his colleagues acknowledged that 70 percent of the company’s global profits found their way to one particular Irish subsidiary, which the Apple gang described as having “no tax residence.” Pressed further, they admitted a second subsidiary, which houses almost $30 billion of global profits, hadn’t filed a tax return or paid taxes in any nation. 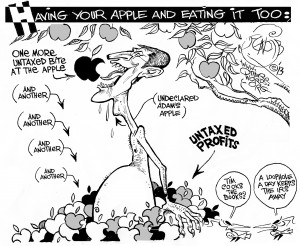 One More Untaxed Bite at the Apple, an OtherWords cartoon by Khalil Bendib

Hours later and steps away, the Senate voted to stick with a plan to cut $4 billion in funding from the food stamp program (known on Capitol Hill as SNAP) out of the Farm Bill. The House version would slice even deeper — a $20.5 billion cut.

What’s going on? Apples are being snatched from the tables of millions of hungry people in America so that companies like Apple can continue to legally move their U.S. profits offshore to avoid paying taxes.

There’s a lot at stake for the most vulnerable among us. More than 70 percent of families receiving food stamps have a child, elderly person, or disabled person in their household. On average, food stamps provide a $4.45 subsidy per day to help struggling families with their food bills.

Senators who argued at the Apple hearing that its shareholders will benefit are correct: Apples will be shifted from those who have none to those whose fruit cellars are full.

There’d be no need for our elected leaders to trim our safety net if our richest corporations didn’t turn avoiding their fair share of taxes into an art form. If Apple had paid U.S. taxes on the $74 billion of profits it shifted offshore, the Treasury would have taken in up to $25 billion more revenue.

One company alone could offset all of the food-stamp cuts adopted by the Senate. With $21 billion left over, we could hire back a quarter of the 300,000 teachers who have been laid off over the same four years that Apple has been shifting its U.S. profits to Ireland.

Apple is, of course, one of many companies that have turned the corporate tax code into a game — one with serious consequences for those who rely most on government services. The volume of cash corporations stash offshore ballooned to $1.9 trillion last year.

Corporate offshore tax-haven abuse costs the U.S. Treasury $100 billion annually. Closing corporate offshore tax loopholes would allow us to fix all of the nation’s 50,000 antiquated bridges (the Federal Highway Administration estimates that this would cost $76 billion), rehire the 300,000 schoolteachers laid off since 2008, and still have money left over to begin shoring up the Social Security system.

Companies like Apple complain about how the U.S. tax system threatens their global competitiveness. They like to point out that our nation has an official tax rate of 35 percent, the highest among developed economies. But they never seem to mention that last year corporations paid an average effective tax rate of just 12.1 percent — one of the lowest rates among developed nations, according to the Congressional Budget Office.

The stock market continues to set new records. Corporate profits are hitting levels never before seen, the productivity of American workers remains the envy of the world, and U.S. CEOs remain the highest–paid on Earth. Granted, using the fear of being uncompetitive may be a compelling talking point, yet there’s little evidence that it’s true.

The real risk of losing our competitive edge comes from crumbling infrastructure, students graduating from schools unprepared for 21st-century jobs or saddled with debt, and poorly regulated banks whose excessive risk-taking has led, time and again, to costly losses borne by all members of society.

We can continue to shower the powerful with barrels of tax breaks and cut spending that makes life for the least powerful among us more bearable. Or, we can change the rules and insist that companies like Apple help pay for apples to feed hungry kids and a whole lot more.