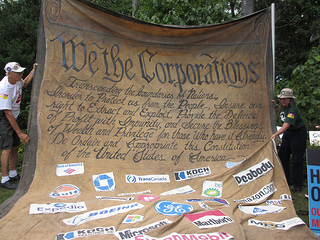 The United States is negotiating a NAFTA-style trade deal that should be alarming to American consumers. The main reason it’s not getting much attention is that the mainstream media is largely ignoring it.

This pact deserves more news coverage. It threatens to undermine our own laws and increase the opportunity for corporate takeovers of public resources in the United States and abroad. The worst part? These negotiations are taking place behind closed doors.

This controversial agreement is called the Trans-Pacific Partnership (TPP). It’s comprised of the United States plus 11 other nations that border the Pacific Ocean. The TPP would boost liquefied natural gas exports and food imports. This increases the real dangers posed by reckless fracking for natural gas and the growth of imported food from several countries whose safety standards fall far short of our own.

The TPP could become the biggest corporate power grab in U.S. history. This deal would establish a regime under which corporations would acquire an equal status to countries, allowing them to take legal action against governments both at the national and local levels.

With this power, multinational corporations — especially energy companies — could overturn laws enacted to protect the public and the environment if they were to deem that those protections violated the profit-based terms of this trade agreement.

The United States currently has enough challenges plaguing our food system, with many of our would-be TPP partners shipping unsafe food even without these so-called free-trade agreements. Seafood imports alone have been particularly troubling. Much of the seafood we import is farm-raised using antibiotics and hormones that are illegal in our own country, and a mere 2 percent of those imports are actually inspected by the FDA.

The TPP would encourage increasing the amount of seafood we take in without requiring the trading partners to ban the use of illegal chemicals.

This could also hurt the American consumers through the expansion of the oil and gas industry, as it tries to increase its land use at home to frack more gas for export to our new TPP partners.

This pact could quickly undermine local, state, and even federal laws that protect public health and the environment. Many localities have recently passed laws to ban fracking. Unfortunately, a lot of the companies that are pursuing hydraulic fracturing in the U.S. are either foreign-owned or have foreign investors.

The TPP would potentially give companies the power to sue local governments, granting them their own permission to exploit natural resources and undermine local laws.

Treaties like the TPP undermine important efforts by grassroots movements and governments to protect people and the environment against the dangers of infecting our food system with increased use of antibiotics and hormones or the risks associated with fracking for natural gas.

Protests against this trade accord have already gotten started in other countries, including Japan and Malaysia, as concerns grow over its expected negative effects. The bottom line is that TPP will bring little, if any, benefit to small-scale growers and producers.

As negotiations near completion, it’s critical that we let our members of Congress know that we don’t support this kind of corporate power grab. President Barack Obama is asking Congress to grant “fast-track” authority, allowing him to negotiate the TPP and other trade deals without otherwise requisite congressional oversight. We must stop that from happening.