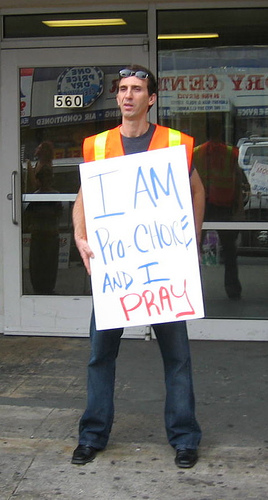 The War on Sex

Despite declines in teen pregnancy and abortion rates, some conservatives aren't ready to celebrate.
By William A. Collins | May 1, 2013

Abortion, condoms,
Things that vex,
Those who would
Prohibit sex.

Fewer American teens are getting pregnant and the national abortion rate is falling. Time to break out the champagne and the bananas flambé, right?

But many religious zealots aren’t celebrating these numbers, which reflect a reduction in the number of traumatized young women and impoverished moms. According to these fervent religionists, no one, especially not the young, should have sex at all — unless they are trying to make babies.

To this end, some states are doing their best to outlaw abortion again. There are now criminal penalties for simply aiding a desperate woman to cross a state line to seek an abortion elsewhere. Anti-choice lawmakers are trying to shut the very last remaining abortion clinics in North Dakota and Mississippi. Republicans are fighting against funding for sex ed, government efforts to make birth control more affordable, and even symbolic measures that would scrub state law books of archaic language that used to make gay sex between consenting adults a crime.

Things are moving in a different direction in other countries. In France, where the majority is Roman Catholic, the lower house of Parliament has just voted to make abortion and contraception free to all girls from age 15 to 18. These services are already covered for the poor under national health insurance, and everyone else gets reimbursed for most of the cost. The French have always been world leaders in sex.

But even the Philippines, a country far more Catholic than France, is trying at last to make birth control readily available to the poor at government expense. Its Supreme Court has delayed things for a few months. But way to go, Manila!

Uruguay is making headway too. Abortions there are available for any reason during the first trimester, which puts that country in the lead of reform in Latin America, and somewhat ahead of Arkansas. Uruguay’s lawmakers have backed marriage equality too.

For what it’s worth, the United Nations looks upon contraception as a universal human right.

So while the public battle rages over access to abortion, the real goal of our local fanatics appears to be much broader: to punish women for enjoying sex. Sounds like a losing platform to me.

Sometimes the goal seems to be punishing women, even if they’ve been sexually assaulted. New Mexico state lawmaker Rep. Cathrynn N. Brown (R-Carlsbad) introduced a bill in January that would make it a crime for rape victims to get abortions. They — and their doctors — would have been charged with “tampering with the evidence” and jailed had it become law. But once word of the legislation got out, Brown backpedaled. There are, it turns out, some common-sense limits in the wars on sex and women.