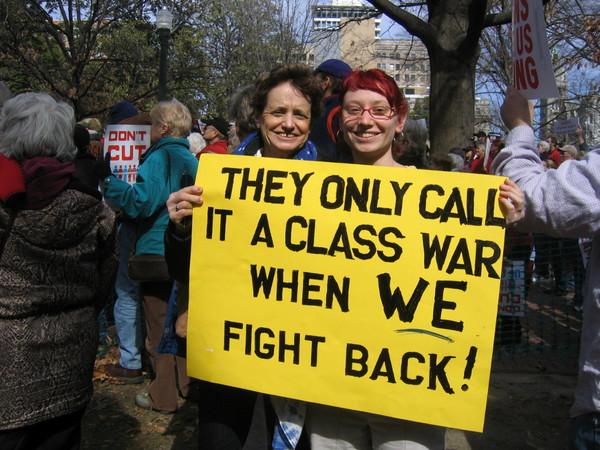 The Class War is So Over

You may have noticed the collateral damage.
By William A. Collins | November 14, 2011

We’ve fought hard,
‘Gainst foreign foes;
It’s our own rich,
Who cause our woes.

Between 1979 and 2007, the after-tax household income of America’s most affluent 1 percent ballooned by 275 percent, while the bottom 20 percent’s income inched up just 18 percent. The top 1 percent now owns more than an entire third of the nation’s wealth, which is more than the combined wealth of the bottom 90 percent. 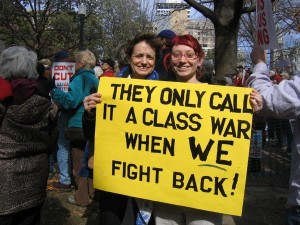 From these sad facts you might correctly deduce that America’s “Class War” is nearly over. The rich are now just mopping up. They recently tied up a few loose ends when Congress finally passed those long-stalled, job-killing “free trade” agreements with Colombia, South Korea, and Panama. Now if they can just privatize Social Security and Medicare, the whole conflict will be over.

I mean, how much more can our richest 1 percent covet? They already own 35 percent of the nation’s wealth, take home 18 percent of its income, and possess 43 percent of its stocks, bonds, and mutual funds. On the other hand, since greed has no known upper limits, I suppose they could keep right on hoarding, but after a while you just get kind of bored.

That leaves serious class combat in the hands of the next 4 percent. They only own 29 percent of our financial assets and would dearly love to move up. Consequently they invest generously in the Republican Party and lobby with vigor against any tax increases that might slow their advance. It must cause a lot of stress.

One problem this next 4 percent faces is that there is only so much wealth and income to go around. In their race to the top they can only get so far by beggaring their peers. That’s where you and I, the middle class, come in. With sufficient deregulation and greasing of political palms, they can also beggar us. That is also “class warfare.”

This war got itself organized in the 1970s when American income equality reached its zenith. Since then, Big Wealth’s big guns have been decimating labor rights and domestic manufacturing. Middle-class jobs have been exported like so many cargo containers, and jobs of every stripe have been replaced by technology. But no system has yet been provided to support the resulting unemployed. (The French, by contrast, deploy a shortened work week and long vacations to spread out the jobs.)

You may have noticed the collateral damage. While CEO and Wall Street pay have soared, median family income, employment, and home ownership have all either flatlined or plummeted. College loans and mortgages alike are in default, along with Gross Domestic Spirit.

Meanwhile the wealthy are taking a victory lap.

New taxes are “off the table” in Congress, and rampant unemployment holds wages down at poverty levels. Indeed, many businesses no longer want regular employees at all. Their part-timers and temps are badly paid and don’t get benefits.

For many companies, the devastation wrought by class warfare has been a great boon. Banks are riding the gravy train, firms that can shift operations overseas have it made, energy companies reap fat subsidies, and the military-industrial complex soars above the fray.

Thus, it’s no surprise that many of those wounded by this economic conquest would take to camping out in public places. Politics has failed them, as have cherished American principles of equality.

Tents and tarps are about all that is left.

OtherWords columnist William A. Collins is a former state representative, a former mayor of Norwalk, Connecticut, and a member of Veterans For Peace's national board. otherwords.org