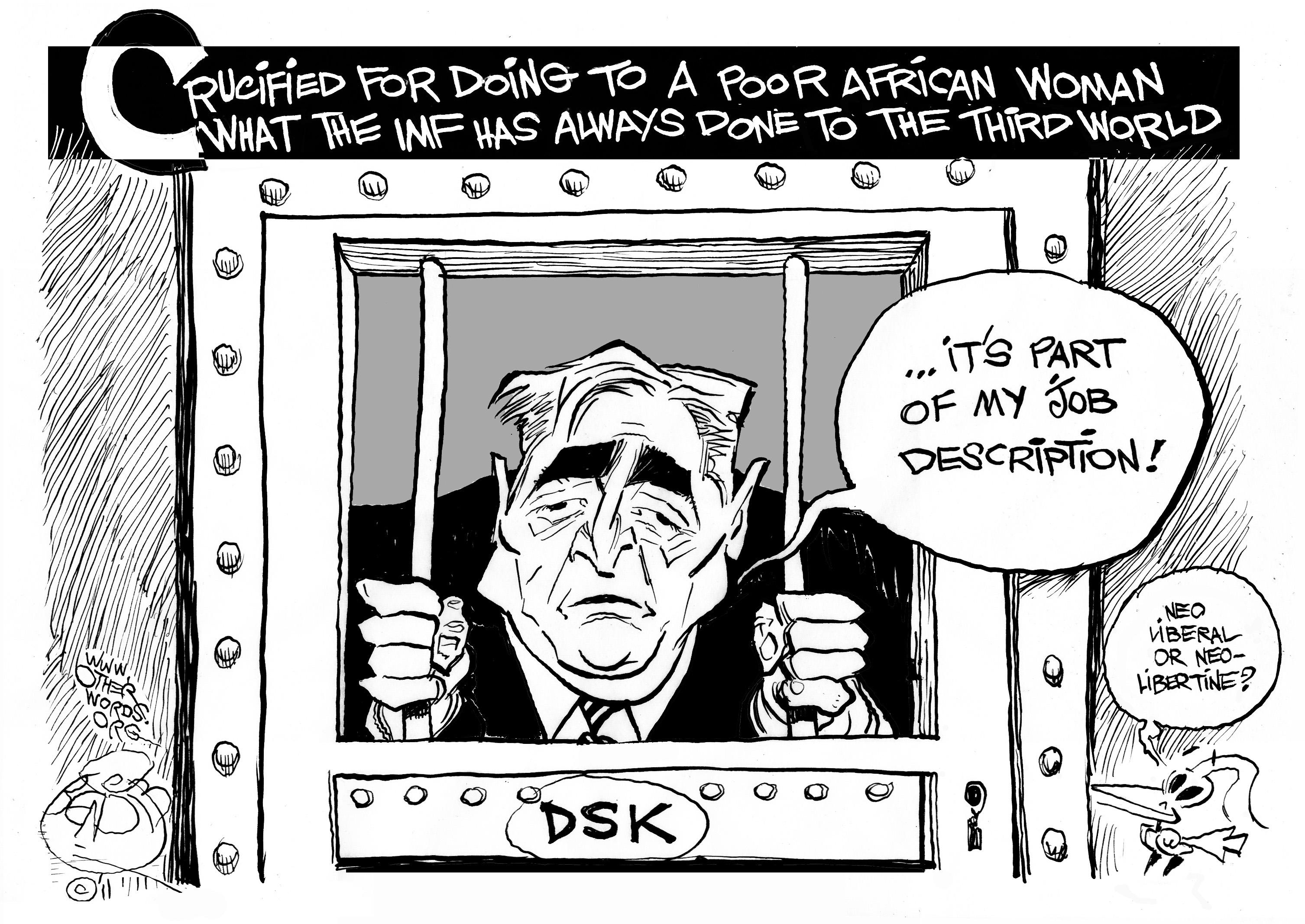 The IMF’s Assault on Women

Dominique Strauss-Kahn's alleged attack on a hotel housekeeper is shocking and deeply symbolic of the IMF's attitude towards women.
By Christine Ahn, Kavita Ramdas | May 23, 2011

A grand jury has indicted Dominique Strauss-Kahn on seven counts, including the attempted rape of a Manhattan hotel worker. Following his alleged attack on the Guinean immigrant as she tried to clean up his $3,000-per-night Manhattan hotel suite, the Frenchman’s history of treating women as expendable sex objects is just coming to light.

The dramatic alleged assault of an African woman — reportedly a 32-year-old widow and single mother who won political asylum — by the disgraced former head of the world’s most powerful financial institution, the International Monetary Fund, is shocking and deeply symbolic. It highlights how, for many in the developing world, the Fund’s draconian policies have systematically “raped” the poor and violated women’s rights. The fallen IMF chief’s disrespect for women is consistent with the gender bias inherent in the institution’s policies. 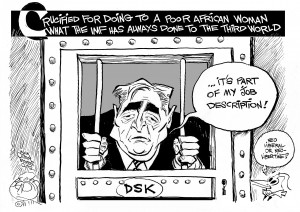 The IMF and the World Bank are charged with promoting international trade and monetary cooperation by giving governments loans during severe budget crises. In exchange, the IMF typically requires that governments enact strict austerity measures. The Fund often presses for exports over local production for local consumption, lower tariffs, and cuts in education, health, and other social spending. This leads to cuts in public services and public sector jobs, which disproportionally affect women. Instead of reducing poverty, IMF loans often deepen poverty, especially for women, who comprise 70 percent of the world’s poor.

For example, in exchange for IMF and World Bank loans, Tanzania agreed to impose fees for health services, which led to fewer women seeking hospital deliveries or post-natal care. Naturally, more mothers died after giving birth. In Zambia, the conditions the Fund and the Bank imposed in exchange for their support led to a significant drop in girls’ enrollment in schools and a spike in “survival or subsistence sex” among young women who wanted an education.

IMF austerity measures apply in more affluent countries too. In 1997, South Korea received $57 billion in loans in exchange for IMF demands that the country slash wages and fire “surplus workers.” When the financial crisis hit, seven Korean women were laid off for every one Korean man. In a sick twist, the Korean government launched a “get your husband energized” campaign encouraging women to support depressed male partners while they cooked, cleaned, and cared for everyone.

Meanwhile, women’s rights activists around the globe are consistently dumbfounded that violations of women’s bodies are routinely dismissed as minor transgressions. Strauss-Kahn, whose decisions affected millions across the globe, was known for forcing himself on younger women and subordinates vulnerable to his influence and clout. Yet he managed to retain his power and was touted as a strong contender for the French presidency.

We live in a world where millions of women don’t tell their dark stories or reveal the horrors they face because they were born women. They are tired of men like Strauss-Kahn, powerful and in suits, believing that they can rape a black woman in a hotel room, just because they feel like it. They are tired of hospitals not having rape kits. They are tired of reporting rape, then being charged for adultery in Iran, Pakistan, and Saudi Arabia.

Strauss-Kahn’s alleged victim refused to be intimidated. She stood up for herself. She fought to free herself — twice — from the violent grip of the man attacking her. She didn’t care who he was — she knew she was violated and she reported it straight to the hotel staff, who went straight to law enforcement, who plucked Strauss-Kahn from his first-class Air France seat.

In a world where it often feels as though wealth and power can buy anything, the courage of this woman and the people who stood by her are reassuring. These stubborn, ethical acts of working class people in New York City illustrate the right women have to say “no.”

It would be a great thing indeed if Strauss-Kahn’s trial succeeds in ending the world’s tolerance for the discrimination against and abuse of women at every level.