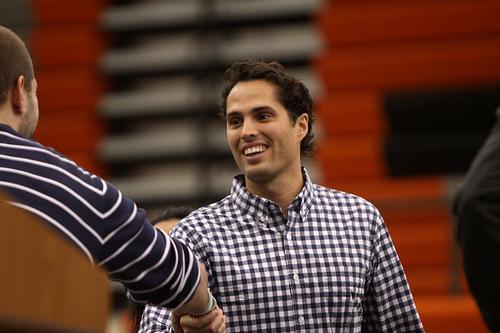 The Problem with Craig Romney and his Padre

Mitt Romney’s son, Craig, has become known as Mitt’s ambassador to Latino voters. He stars in Spanish-language TV and radio ads for his father. He spoke directly to Latinos in Spanish at the Republican National Convention. He talks to Hispanic groups nationwide.

And what qualifies Craig Romney to be Señor Outreach? Has he studied the issues that Latinos care about? Worked on policy issues? Perhaps memorized some talking points?

Nope. Craig Romney just speaks Spanish. That’s why he’s equipped to be out there in front of Hispanic groups. That’s apparently why he calls himself an “ambassador.”

No one wants to knock the guy for being bilingual. And Craig Romney speaks Spanish beautifully, with a fine accent and cadence. This tall, dark, and handsome guy could even pass for Mexican-American — which of course he sort of is, given where his grandfather George Romney was born.

But Craig Romney knows little or nothing about the policy issues that Hispanics might want to hear about. And he freely admits this at campaign stops across the country.

You’d think reporters might ask him why his fluency in Spanish qualifies him to be the Romney campaign’s point person for Hispanic groups, but the question doesn’t seem to come up much, if at all. Instead, reporters passively listen to him gush about his dad, as if no one cares that Craig is ducking the issues.

“If you want to hear some personal stuff about my dad, that’s my job,” he told Latinos in Nevada. “I love to tell stories about my dad.”

Dad stories? Aw, shucks. But seriously, is that enough, even if he can tell those stories in Spanish? 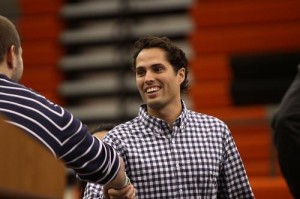 What about the economy? How is Mitt Romney going to create jobs? And the Affordable Care Act? Can Craig explain why Mitt Romney says he’s going to kill our landmark health care reform?

If you believe the polls, these are the issues that Latinos, like most Americans, want to talk about, in whatever language. Yet, as far as we’ve seen, Craig Romney can’t address them.

With such a lightweight ambassador on the job, it’s not surprising that Mitt Romney isn’t making a dent in Obama’s overwhelming advantage among Hispanics. Numerous polls put Obama on top by at least a 65 percent to 25 percent margin. That’s even worse than John McCain did four years ago.

And both Republicans and Democrats will tell you that the Latino vote could be decisive in battleground states like Colorado, Florida, Nevada, and Virginia.

Does the Romney campaign have stealth polling data that Latinos in those states don’t care about policy issues? Do the numbers show they just want to hear Spanish words from the mouth of a younger, more-likeable Romney?

To be fair, Craig Romney does make some appearances on the campaign trail with others who are better on the substance. But still, there’s an element of deception and condescension, isn’t there, when Mitt Romney’s most visible point person on Latino issues knows little or nothing about them? Even if he’s a nice guy, who says nice things about his dad and looks good on TV speaking in Spanish?

Reporters should challenge both Craig Romney and his dad on this shortfall. Latinos should expect more from an “ambassador.”