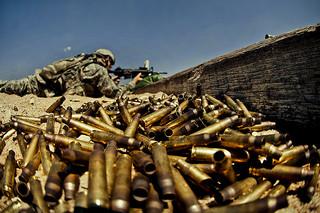 The Real Problem with Military Spending

The Pentagon's budget has plenty of fat, but cuts need to be targeted.
By Mattea Kramer | November 21, 2012

The federal budget cuts scheduled to start January 2 unless Congress gets its act together would reduce funding for everything from nuclear warheads to food safety. But even if you feel strongly that federal spending is out of control, there are plenty of reasons to cancel these looming cuts.

Our lawmakers are currently negotiating a plan to avoid these steep budget reductions that are known in Washington as “sequestration” — a term for automatic, across-the-board spending cuts. Congress is eager to avoid sequestration in January because the cuts would poison our flagging economic recovery. But rushing Congress into making budget cuts without allowing enough time to make them thoughtfully could also be harmful. 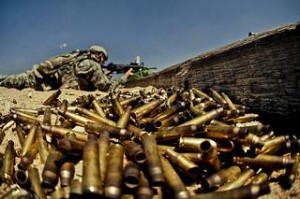 There’s certainly room for savings in the nation’s $3.7 trillion budget — if we go about it in a smart way. It’s the responsibility of our elected officials to make cuts judiciously by targeting low-impact programs and sparing — or even enlarging — programs that deliver great value.

The pending sequestration budget cuts, however, would simply slash every program in the discretionary budget. Pentagon funding, for example, would plunge by $55 billion in 2013 if sequestration took effect.

Military hawks are squawking about these looming cuts, claiming that they’d weaken our national security. Yet we can easily spend much less on our troops, wars, and military research without becoming less safe. According to the White House, the Pentagon’s base budget — which doesn’t include things like the costs of our Afghanistan operations — grew by 48 percent over the last decade, after adjusting for inflation.

We’re spending about $660 billion a year on our military. That’s nearly one in five of our federal budget dollars. Not only do we spend far more than peer nations like France or China, we spend more than the next 16 largest militaries combined. The Pentagon accounts for more than 40 percent of global military expenditures.

Military budget experts have pinpointed many ways to cut the Pentagon’s $660 billion budget. We can phase out Cold War weapons programs, trim the U.S. nuclear arsenal, and cut the number of U.S. military personnel deployed overseas. None of these things would necessarily harm our national security. But implementing smart reductions takes time, and sequestration would force immediate and un-targeted cuts in 2013.

So it makes sense for lawmakers to cancel sequestration, but that’s not the end of their task — it’s just the beginning. Now is the time for lawmakers to do the real work of putting together a long-term plan to cut obsolete and ineffective military programs. The American public is on board with this kind of downsizing. Americans on average say they’d like to see the Pentagon’s budget cut by nearly 20 percent, as The Washington Post has reported. But Washington has yet to catch on, and some Republicans and Democrats have actually proposed increasing our military spending.

So we should support our lawmakers’ efforts to cancel sequestration while holding them accountable for the larger task ahead. They should replace those across-the-board cuts with a smarter, long-term approach to deficit reduction.

OtherWords guest columnist Mattea Kramer is a senior research analyst at National Priorities Project and the lead author of the new book A People's Guide to the Federal Budget. OtherWords.org