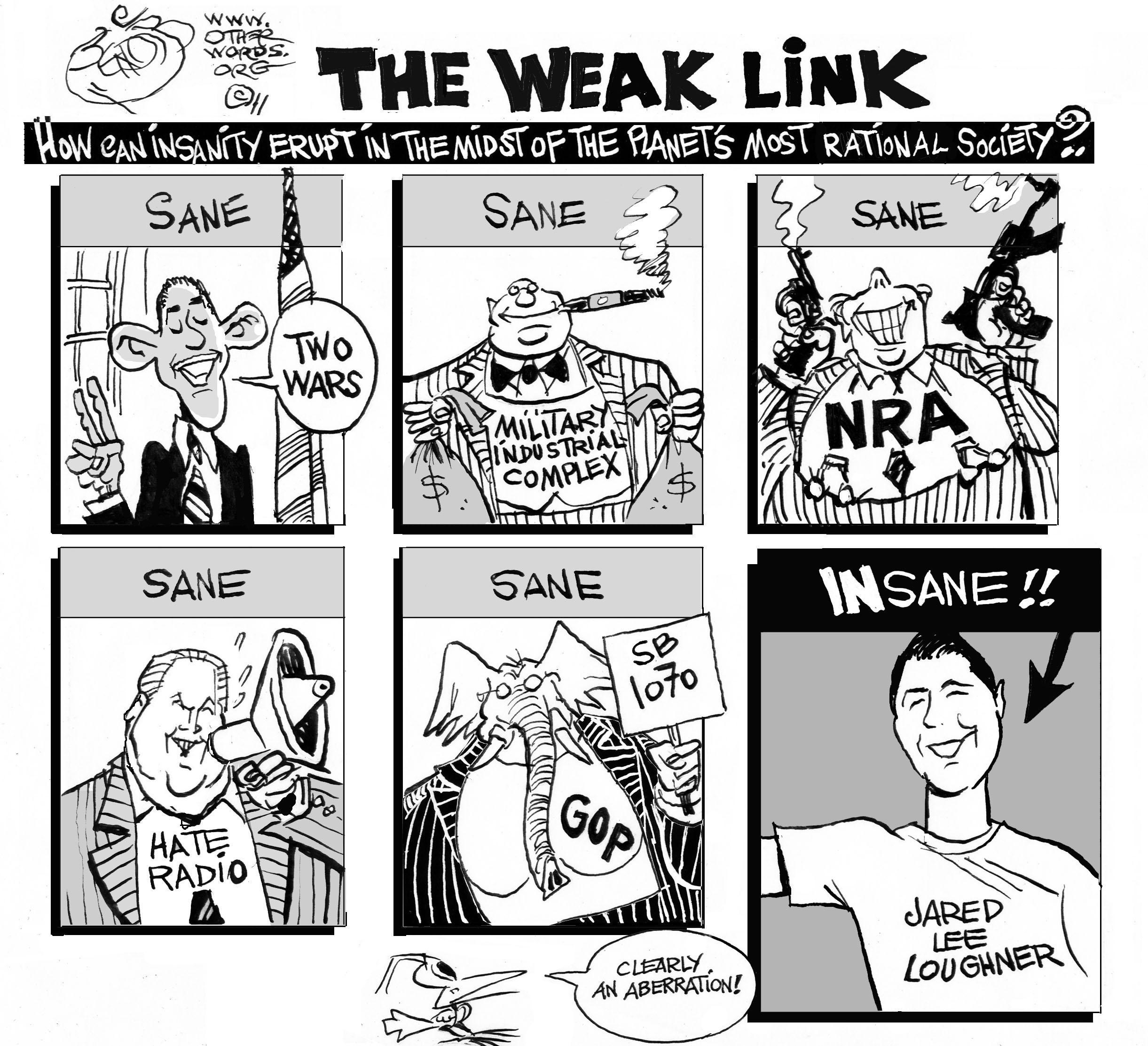 The Right to Bear Arms, Even if You’re Nuts

Where else can a certifiable loony who looks like Charlie Manson's creepy cousin walk into a gun store and buy a semi-automatic pistol that shoots 30 rounds in just a few seconds?
By Donald Kaul | January 17, 2011

Say what you will about the attempted assassination of Rep. Gabrielle Giffords (D-AZ). Add in the murder and severe injuries suffered by assorted bystanders in Tucson and it all proves that we’re still a free country. God bless America!

Where else can a certifiable loony who looks like Charlie Manson’s creepy cousin walk into a gun store and buy a semi-automatic pistol that shoots 30 rounds (30!) in just a few seconds? And then walk around with it, no questions asked?

The result: six dead and 13 wounded. 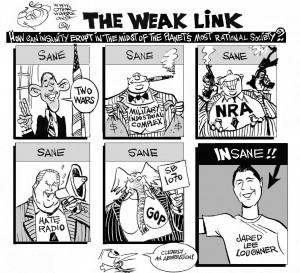 Only in America. And Iraq. And maybe Afghanistan, Sudan, places like that. All bastions of freedom-loving folk.

Of all the places in these United States that love freedom, Arizona is the place that loves it most. It’s one of three states that allow people to carry a concealed weapon without a permit. And as for the 30-shot weapon, Congress–the National Rifle Association’s legislative arm–made that legal six years ago.

The incident does cast doubt on the NRA theory that “a society that carries guns around freely is a polite society.” The shooting of NRA member Rep. Giffords and the murders of her aide, a Federal judge, three elderly women, and a nine-year-old girl were a lot of things. Polite wasn’t one of them.

Apparently, they weren’t victims, just martyrs to the freedom of the American people–rich and poor, crazy and sane alike–to own guns.

Some liberals have cynically seized the opportunity to condemn the sometimes violent rhetoric of the political right. You know, “if ballots don’t work, bullets will.” That kind of thing.

They point to a campaign event sponsored by Giffords’ Republican opponent last year at which voters were invited to fire a fully automatic M-16, as a “symbol” of his assault on the lady. Republicans are big on symbols.

Some liberals have even gone so far as to blame Sarah Palin just because that good woman put out a map “targeting” liberal politicians for defeat, marking their districts with cross hairs resembling telescopic gun sights.

Palin was quick to deny that she meant that literally. As the big-hearted humanitarian that she is, she sent “condolences” from herself and Todd to the families. Is that a great American gesture or what?

Her spokesperson said the cross hairs weren’t meant to look like rifle sights at all. They were the “surveyor’s symbols” one might find on a military map to indicate locations. (Perhaps she was trying to nail down the surveyor vote.)

That didn’t stop the local sheriff (probably one of those rare, oddball liberal sheriffs) from denouncing “the vitriolic rhetoric that we hear day in and day out from people in the radio business and some people in the TV business.” He called Arizona “the Mecca for prejudice and bigotry.”

That got Jon Kyl’s hackles up. Kyl is an Arizonan and the Senate’s No. 2 Republican. “I didn’t really think that that had any part in a law enforcement briefing,” he said. Other Republican leaders were similarly concerned.

In truth, it’s difficult to tie the shooter to the political right, even though he expressed concerns about “the government taking over.” Nor is he a child of the left, as some defensive right-wingers have sought to paint him.

He’s quite simply a nut–a fairly bright young man who slowly slipped into madness. I don’t know what can be done with people like that. That is until they commit some heinous act that gives an excuse to lock them up.

Not selling them guns that shoot 30 bullets real fast would be a start, I suppose. But what am I saying? You couldn’t do that without limiting the right of the rest of us to buy 30-shot, rapid-fire pistols. Gee, then what would we do?