The dark side of corporate-run colleges is no longer a secret.
By William A. Collins | November 28, 2012

College wants
Your mind to grow,
It also wants
To grab your dough.

Once upon a time, most college kids plugged away in high school, saved their babysitting money, took practice exams, settled for a rebuilt clutch in the family car, and worked summer jobs waiting tables. They studied like crazy, read far into the night, and had a good shot at a decent job. Rich kids attended private universities, poorer kids went to state schools. Part-time, vocational, and waitlisted students opted for community colleges. 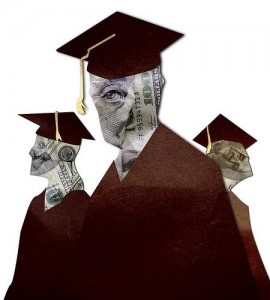 Now there’s a fourth option. Today, 10 percent of all college students and 25 percent of all student loans go to for-profit schools. Too often, these artificial universities offer rudimentary courses and worthless degrees, leading down a well-trod path to unemployment. Typically, they plow 30 percent of their revenue into advertising and marketing.

Unfortunately, veterans are prime prey for these schools. When they return home looking to build a future, many vets are enticed by the glitzy advertising, easy loans, and promise of a new life. Too late, they realize that they’ve squandered their GI Bill educational benefits on fools’ gold.

Civilians aren’t so different, except they have no GI Bill. If jobs are tight and college loans easy, why not go to school? Then you’ll be ready to rumble whenever the economy picks up. Good thinking, if you get a useful degree that can lead to a job. But these days even legitimate colleges can’t guarantee that, let alone the University of Phoenix or Kaplan Higher Education’s college campuses and online schools.

So now it has come to pass that outstanding student loan debt exceeds outstanding credit card debt. One in five American households is struggling to stay on top of their college loans and one in four borrowers is past due on payments. With both overall employment and wages in the tank, and corporate schools becoming still more predatory, college debt is often a lifelong proposition.

But many old-line, non-profit universities aren’t so saintly either. Their lifeblood is prestige and so they need fancy buildings and foreign campuses. Alumni often spring for the bricks and mortar, but the upkeep is a bear. So are the executive salaries and fees now paid to recruiters of prosperous foreign students.

Anyhow, higher education is no longer a golden pathway. When just about everyone needs a diploma for a shot at a decent job, everyone is vulnerable to accruing unpayable debt. The White House is pressing for a law that would require colleges to publish a number of things: their total cost for a degree, the likely indebtedness and payments on resulting loans, and the employment rate of recent graduates.

That’s a fair amount of work, but worth the effort. Arming prospective students and their parents with that data will help them make sensible decisions and it will motivate schools to improve educational outcomes. Granted, this may be beneath the dignity of some fine universities, but they had better get used to it.

The good news is that the sleazy side of corporate-run schools is no longer a secret. The Washington Post is in a quandary due to its ownership of the former profit-powerhouse Kaplan. Phoenix and Kaplan are closing scores of their many so-called “campuses.” And Senators Olympia Snowe and Dianne Feinstein are embarrassed for their family involvements.

It couldn’t happen to a more deserving bunch.