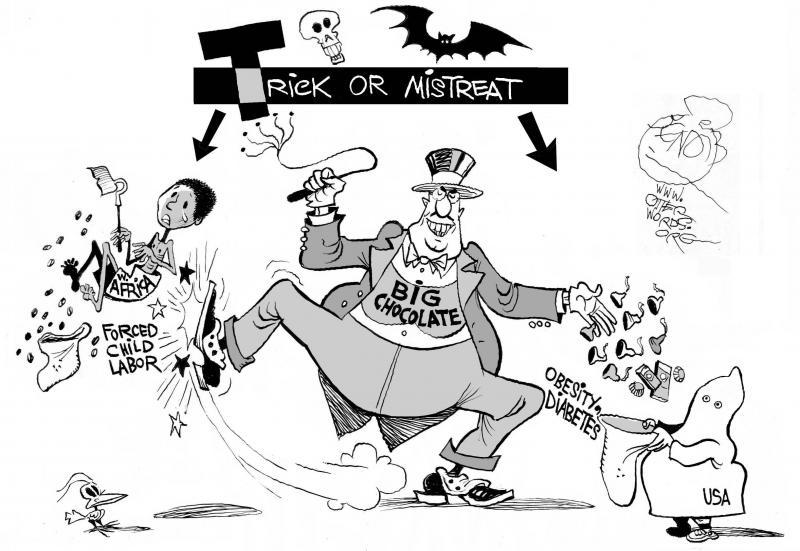 Trick or Mistreat, an OtherWords cartoon by Khalil Bendib

The Spooky Side of Chocolate

There's nothing sweet about child labor.
By Andrew Korfhage | October 24, 2012

This Halloween, many of the chocolate goodies handed out to American children dressed as goblins and witches will have a ghoulish history of their own.

In the cocoa fields where many of these chocolates originate, West African children work grueling hours — some of them trafficked or forced into this labor — to make the sweet treats we enjoy here in the United States. Nobody wants to knowingly purchase products tainted with exploitation, which is why the most responsible chocolate companies have been working to certify that their products are free of child labor ever since this problem first gained wide public exposure back in 2001.

Unfortunately for the children in the cocoa fields, those responsible companies haven’t yet included the giant chocolate corporations whose candies line the impulse-buy shelves near the cash registers of nearly every gas station, convenience store, and supermarket. The companies working hardest to protect children and pay living wages to the workers in the cocoa fields have been the smaller, less widely known brands acting voluntarily to create those protections.

It didn’t have to be this way. 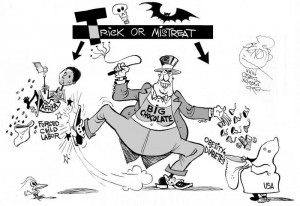 Trick or Mistreat, an OtherWords cartoon by Khalil Bendib

Back in 2001, the chocolate industry as a whole was on notice from no less an authority than Congress, which sought to legally prohibit the use of forced child labor in chocolate products sold in the United States. The chocolate industry successfully watered down the proposed legislation into a series of voluntary goals with unenforceable deadlines, which Big Chocolate — companies like Mars, Nestle, and Hershey — then proceeded to ignore for nearly a decade.

In 2009, Mars and Nestle began making baby steps to use third-party certifiers to monitor child labor in small percentages of their product lines. Hershey — the industry laggard — finally announced weeks before Halloween that it would take action by the year 2020 (the same year Mars has publicly announced as its target to expand certification).

Think about it: The chocolate industry knew in 2001 that it had a problem severe enough to require legislative intervention by Congress, but put off addressing that problem for 10 years. And then, it set its eventual targets another eight years into the future. That’s a lifetime for a child born in the Ivory Coast at the turn of the millennium. An entire generation of children could have been protected by a chocolate industry that refused to act.

The problem is still real. The Child Labor Cocoa Coordinating Group prepared a report for Sen. Tom Harkin (D-IA) back in January, which reported continued child trafficking in Ghana and Ivory Coast. “Thousands of children are engaged in hazardous activities in cocoa farming, including clearing fields, using machetes, and applying pesticides,” according to the report.

And a 2011 report prepared by Tulane University confirms that only around 10 percent of the child workers in Ghana, and less than five percent of child laborers in Ivory Coast receive any form of payment for their work.

Chocolate lovers must keep the pressure on Big Chocolate, and hold those companies accountable so they meet their eventual deadlines. While 2020 is too far off, a shift in the industry’s priorities will nonetheless benefit the millions of cocoa farmers in West Africa — whose labor helps our children have a happy Halloween.

In the meantime, what can you do?

This Halloween, you can purchase chocolates for your trick-or-treaters from the smaller, more responsible companies that foster direct relationships with their supply chains, and have been certifying their cocoa for years. Here are some examples: