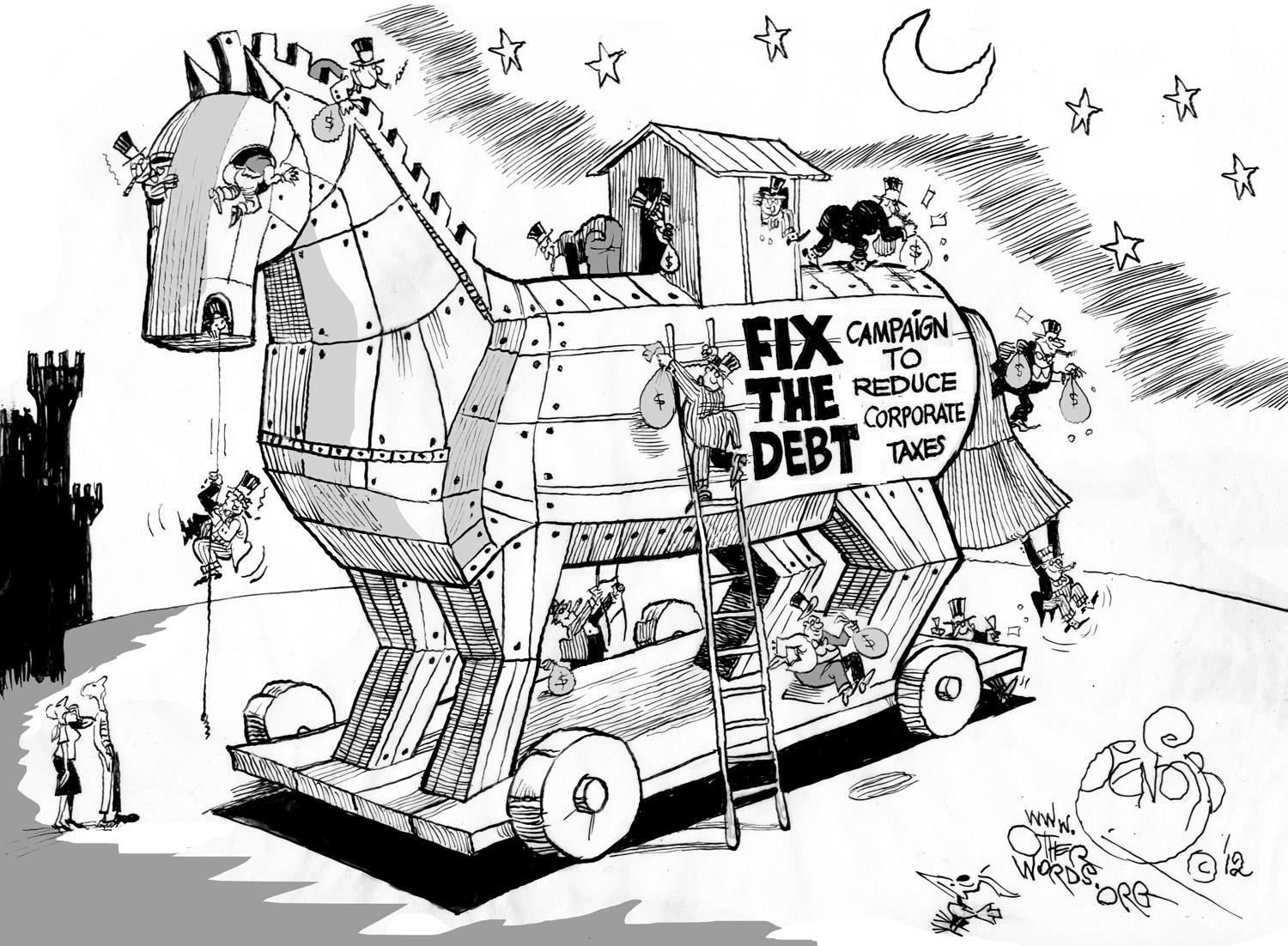 The Fix the Debt Racket, an OtherWords cartoon by Khalil Bendib

The Trojan Horse in the Debt Debate

Dozens of CEOs are running a misleading campaign that would just make matters worse.
By Sarah Anderson | November 14, 2012

It’s budget showdown time in Washington. With various tax increases and spending cuts set to kick in at the end of the year, the pressure is on for Republicans and Democrats to make a deal.

A major player in this hot debate is a new corporate coalition called “Fix the Debt.” They’ve recruited more than 80 CEOs of America’s most powerful corporations and raised $60 million for a big media and lobbying blitz.

Their ads call for what appears to be a moderate agenda of balancing spending cuts with some tax increases in order to bring down the deficit and ensure a bright future for the United States. But a closer look suggests the Fix the Debt campaign is a Trojan Horse.

Behind their moderate slogans is an extreme agenda focused on further reducing corporate taxes and shifting the burden onto the poor and elderly.

Take a look, for example, at a slideshow presentation the campaign has prepared as a “CEO tool” for wooing supporters. You can check it out right on their web site. It says flat out that the so-called “fiscal cliff” is an opportunity to push for “considerably less” spending on Medicare and Medicaid. It also calls for a shift to a “territorial tax system,” which would permanently exempt U.S. corporations’ foreign income from U.S. taxes. 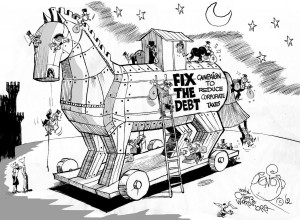 The Fix the Debt Racket, an OtherWords cartoon by Khalil Bendib

At the Institute for Policy Studies, we analyzed how much the Fix the Debt member corporations would have to gain from this particular corporate tax break. The results are staggering.

We focused on the 63 Fix the Debt member companies that are publicly held and therefore must report how much they’ve amassed in overseas profits. Combined, these firms stand to gain as much as $134 billion in tax windfalls if the territorial system is adopted. That’s $134 billion that won’t go towards fixing the debt. To put that figure in perspective, it would be enough to cover the salaries of two million elementary school teachers for a year.

One of the biggest potential winners from a territorial tax system is Microsoft, which could reap a savings of $19.4 billion on its $60.8 billion in accumulated foreign earnings.

Why does Microsoft have so much dough stashed overseas? A Senate investigation this year shed light on this question. They found that Microsoft takes the patents for software developed at its U.S. research facilities and registers them in tax haven countries. That way, when a U.S. customer buys a copy of Microsoft Office, a hefty chunk of the profits is recorded in no-tax zones.

Under current rules, Microsoft would have to pay U.S. taxes on such foreign earnings if they bring them back to the United States to invest or pay shareholder dividends. But under Fix the Debt’s favored territorial system, they would be permanently exempted.

The Fix the Debt campaign’s CEOs are attempting to portray themselves as the reasonable compromisers. Some of them have even offered to give up the Bush-era tax cuts for the rich in exchange for other parts of their agenda. But given the massive windfalls they could get from a shift to a territorial tax system and other corporate tax breaks, this is hardly surprising. If their companies save billions in tax dollars, corporate profits will soar — and their CEO pay will skyrocket too.

Beware of this Trojan horse. These CEOs may try to conceal their tired old agenda of more corporate tax breaks in a patriotic package. But if they’re serious about helping America, they wouldn’t be trying to balance the budget on the backs of the most vulnerable.

Sarah Anderson directs the Global Economy Project at the Institute for Policy Studies in Washington, DC and is a co-author of the new report: The CEO Campaign to ‘Fix’ the Debt: A Trojan Horse for Massive Corporate Tax Breaks. www.ips-dc.org
Distributed via OtherWords (OtherWords.org)