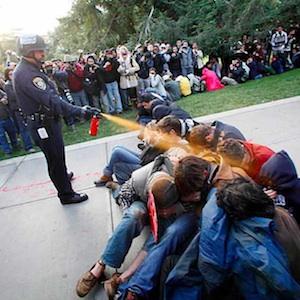 Lt. John Pike hosed down a line of silent, passive, determined, and frightened students, as if they were nothing more than weeds he needed to kill.
By Kate Zarrella | November 28, 2011

The video sophomore Thomas Fowler shot of a campus cop attacking a group of about 20 University of California, Davis students with pepper spray at close range during a peaceful protest has gone viral. Although this outrageous incident has garnered widespread media coverage, I think it’s important to share my perspective on it as a student who lived through these unbelievable events as they unfolded.

It all began on the Thursday before Thanksgiving, when a small contingent of UC Davis students camped on our Quad. They were protesting recent police brutality at UC Berkeley and a proposal to hike tuition by 81 percent over the next four years, which would increase the cost of tuition so much that many students would no longer be able to attend school. Undergraduate tuition has already more than tripled in the past decade.

The next morning, campus police officers announced that due to the university’s no-camping policy, they would have to leave. In an act of civil disobedience, the students refused to comply.

By the time I left work at the campus bookstore on that afternoon, the police and protesters were having a standoff on the Quad. A police megaphone blared warnings while the students held hands, formed a circle, and chanted back, “We’re doing this for your children.”

Watching the determination of those protestors made me realize how cowardly, and perhaps selfish, I was for not taking a stand with them. I agreed with everything they stood for, but my fear of being arrested was stronger than my determination to stand and fight.

I assumed that nothing in Davis could ever get as out of hand as the Berkeley protest, where police attacked students and faculty members with batons. Still, I felt the need to film the standoff, hoping the threat of having their response to the protest publicized would keep the police from reenacting the atrocities at UC Berkeley.

Ten minutes later, the tents that had sparked the confrontation were down. Thinking the standoff was over, I went home. It wasn’t till later that night when my friend came out of her room, sobbing and inconsolable, that I learned my fellow students had been brutally pepper-sprayed and arrested.

I was horrified when I saw the now-infamous video of Lt. John Pike hosing down a line of silent, passive, determined, and frightened students, as if they were nothing more than weeds he needed to kill.

Before, it had been easy for me to tell myself that police brutality was Berkeley’s problem, and that the new fee hikes wouldn’t go into effect until after I graduated. But the selflessness of those 20 protesters inspired me to stand with them and prove that they aren’t fringe extremists, just the first group brave enough to speak up.

On Saturday, I tried to attend UC Davis Chancellor Linda Katehi’s press conference, but I found silent, stony-faced administrators blocking every entrance. Wanting a chance to hear from her, but receiving no alternative, I waited until the next day with hundreds of other shocked and determined students to receive an answer to our burning question: Why did this happen on our campus?

For hours Katehi refused to leave or negotiate with us, until an interfaith minister talked with her on our behalf. The final compromise required us to move to one side and sit down and required her to walk past us to her car.

So hundreds of friends and strangers alike sat side by side, silent with arms linked, to show solidarity with the brutalized peaceful protestors. As another viral video clip shows, our line went further than the eye could see. Our silence clearly said that we condemn violence on our campus and that we affirm not only our human dignity, but our right to protest injustice.

This atrocity will only strengthen our resolve to bring safety, equality, and accountability to our campus through peace and persistence.

Kate Zarrella, a senior English and Psychology double major at the University of California, Davis, writes the Monday column for the Aggie, the school’s student-run newspaper. She can be reached at kazarrella@ucdavis.edu
Distributed via OtherWords (OtherWords.org)