The United Nations is Failing Syria

Now is the time for the world's leaders to show support for human rights in practice, not just words.
By Frank Jannuzi | June 4, 2012

Over the past year, more and more citizens around the world have been standing up for their freedom. Sadly, as chronicled in Amnesty International’s 2012 annual report, leaders everywhere have failed to mirror the courage shown by millions of peaceful protesters. Too many nations have placed self-interest and profit ahead of people’s rights — and even their lives. The results have been tragic.

The United Nations Security Council, which is supposed to be the bulwark of global peace and security, has failed in its response to these popular uprisings, especially in the Middle East and North Africa. Inaction over Syria has left the Council seeming woefully unfit for its primary purpose: maintaining international peace.

Russian and Chinese intransigence has put the Council’s credibility at risk, undermining its core function and rendering accountability for crimes against humanity elusive. President Bashar al-Assad’s regime continues to face down protesters with snipers and tanks, arresting and torturing children as young as 10. Yet Russia, which has provided arms to Syria, is failing to use its close security relationship — it maintains a naval base at Tartus — to persuade Assad to stop the killing. 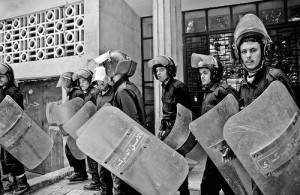 China, resolutely opposed to intervention in the internal affairs of other states (except when it suits Beijing), isn’t exactly a profile in courage. China appears stubbornly committed to preventing the Council from acting decisively to quell the violence. It blatantly ignores the lessons it should have learned from the diplomatic blunders Beijing made backing repressive regimes in Sudan and Burma.

The other three permanent members of the Security Council — the United States, France, and the UK — haven’t always been principled in their approach either. The United States remains far and away the world’s largest arms dealer. Just look at Bahrain to see how repressing peaceful dissent still doesn’t disqualify a U.S. friend to the American arms bazaar.

As Russia and China prefer to maintain their special, profitable relations with repressive governments, and as the United States and its allies only selectively champion freedom and democracy, how can one expect the international community to step up its game? It’s time we matched the courage and authenticity of those standing up for their rights with resolute, multilateral support.

First, end the hypocrisy. The Security Council shouldn’t play favorites or overlook the atrocities its members’ client states commit. The international community should pressure all abusive governments to rein in their secret police and other security forces and permit citizens to speak, organize, and redress grievances.

Second, UN member states should take their international responsibilities seriously, and not just pursue policies that fill their coffers at the expense of peace and stability. Washington and other Security Council members should lead by example.

Third, the global community should invest in systems and structures that are based on human rights and the rule of law. Leaders should strive to build and maintain a system that protects the powerless and restrains the powerful. Injustice, often fueled by rapacious arms merchants, is the root cause of many of the world’s conflicts.

From Burma to Bahrain, it’s clearer than ever that the human desire for freedom and justice is universal. It can’t be crushed or contained.

If crises bring opportunities, then we are living in a world of possibilities.

Now is the time for the world’s leaders to show support for human rights in practice, not just words. Countries can’t long secure their own prosperity while continuing to turn a blind eye to suffering and repression. As President John F. Kennedy reminded the world half a century ago, “Freedom is indivisible, and when one man is enslaved, all are not free.”