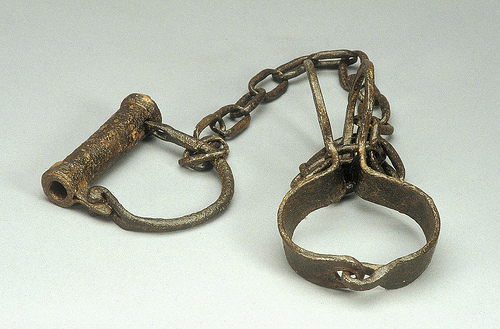 Men who imagined brilliant new freedoms failed to imagine them for enslaved Americans. That means we have to be revolutionary today.
By Sarah Browning | October 18, 2017

This summer, on the very day that white supremacists rioted in Charlottesville, Virginia, I was down the road visiting Montpelier — the home of James Madison, our fourth president.

On the house tour, we stopped in Madison’s upstairs library, where he spent hundreds of hours reading about earlier attempts at self-governance.

There, he imagined the previously unimaginable: freedom of religion, freedom of expression, the right to a jury of one’s peers. Madison would go on to write those amendments into the Constitution, earning him the name “Father of the Bill of Rights.”

As we stepped outside to Montpelier’s beautiful grounds, we learned something else: To keep his small family of four white people in the height of 18th century luxury, James Madison enslaved 100 black people.

Indeed, Montpelier now has an Enslaved Community Exhibit and tour. I was eager to see how these two Madisons were being interpreted: the man who conceived  unimaginable freedoms for himself and his kind, while simultaneously denying freedom to countless others.

The Enslaved Community Exhibit is powerful: historians, archeologists, and descendants have worked hard to document the lives of the hundreds of African Americans enslaved at Montpelier over the years.

Artifacts of their lives are on display, and hundreds of their names are painted on the exhibit walls. Videos recreate the story of enslaved people who tried to escape and were recaptured and imprisoned.

Then I took the tour.

The white guide began to explain why James Madison didn’t free any of the people he enslaved when he died. “James Madison was a practical man,” the guide said. “He knew that they would not be welcomed into the deeply prejudiced society of the time.”

I tried to give the man a way out. “Perhaps this is what Madison told himself so he could sleep at night. But if he’d asked any of the people he enslaved, I’m sure they would’ve preferred freedom.”

“No, no,” the guide continued, “slave states required that freed men and women leave the state within a year. Even the North wasn’t welcoming. … They would’ve had to go all the way to Canada.”

Canada? Would that really have been worse than slavery?

When I wrote to the Montpelier administration afterward expressing my outrage that their staff would justify slavery on any grounds, the reply included this information: “A visitor to Montpelier in 1835 noted that [Madison] ‘talked more on the subject of slavery than on any other, acknowledging, without limitation or hesitation, all the evils with which it has ever been charged.’”

My correspondent then explained that Madison’s solution was support for the American Colonization Society, which proposed — and implemented — the outrageous scheme of sending African Americans to West Africa, to what’s now Liberia.

In other words, though Madison could imagine a brand new form of government, he couldn’t imagine living a more modest lifestyle, side by side with people whose skin was a different color from his own.

Let’s pause a moment and consider the possibility: What if James Madison — and the other most powerful men of his time — had declared publicly, as apparently they did at home, the evils of slavery? What if the original Bill of Rights had ended slavery outright?

It seems shocking, I know. But in 1789, so did freedom of religion.

What if we were the new revolutionaries, and dedicated ourselves to building a society that truly enacted the promise James Madison imagined — for all our people?

Sarah Browning directs the Split This Rock poetry collective. She’s an associate fellow at the Institute for Policy Studies. Distributed by OtherWords.org.