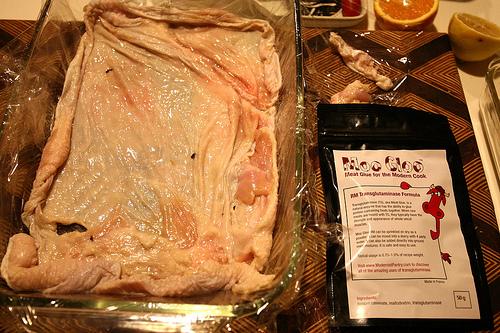 These Steaks May Stick to Your Ribs

While meat glue is widely used, corporations peddling molded meat aren't eager to let us consumers in on their little secret.
By Jim Hightower | June 11, 2012

If you’re one who enjoys a steak dinner now and again, let me ask this question: do you prefer it with a nice sauce, a side of garlicky spinach — or maybe some transglutaminase?

Transglutaminase is an enzyme made by the fermentation of bacteria and added to meat pieces to make them stick together. Yes, “meat glue.” It’s what’s for dinner. 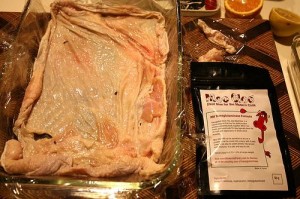 This is yet another dandy product from industrialized food purveyors that keep inventing new ways to mess with our dinner for their own fun and profit. Right about now, you’re probably asking yourself: “Why do they need to glue meat together?”

Glad you asked. It’s so the industry can take cheap chunks of beef and form them into what appears to be a pricey steak. For example, remember that filet mignon you ordered at the Slaphappy Steakhouse chain recently? By liberally dusting meat pieces with transglutaminase powder, squishing them into filet mignon-shaped molds, adding a bit of pressure to bond the pieces, and chilling them — voila, four-bucks-a-pound stew meat looks like a $25-a-pound filet mignon!

While meat glue is widely used, corporations peddling molded meat aren’t eager to let us consumers in on their little secret. Well, sniffs the meat industry’s lobbying group, they have to list transglutaminase on the ingredient label and stamp the package as “formed” or “reformed” meat. How honest! Except that most of these glued steaks are peddled as filet mignon through high-volume restaurants, hotels, cafeterias, and banquet halls — where unwitting customers never see the package or ingredient label.

This is why we should support truth-in-menu laws. Make them say “reformed and glued” filet mignon right on the menu. That simple step lets us decide if we really want to eat that cut of meat. Consumers should have the right to know — and choose.