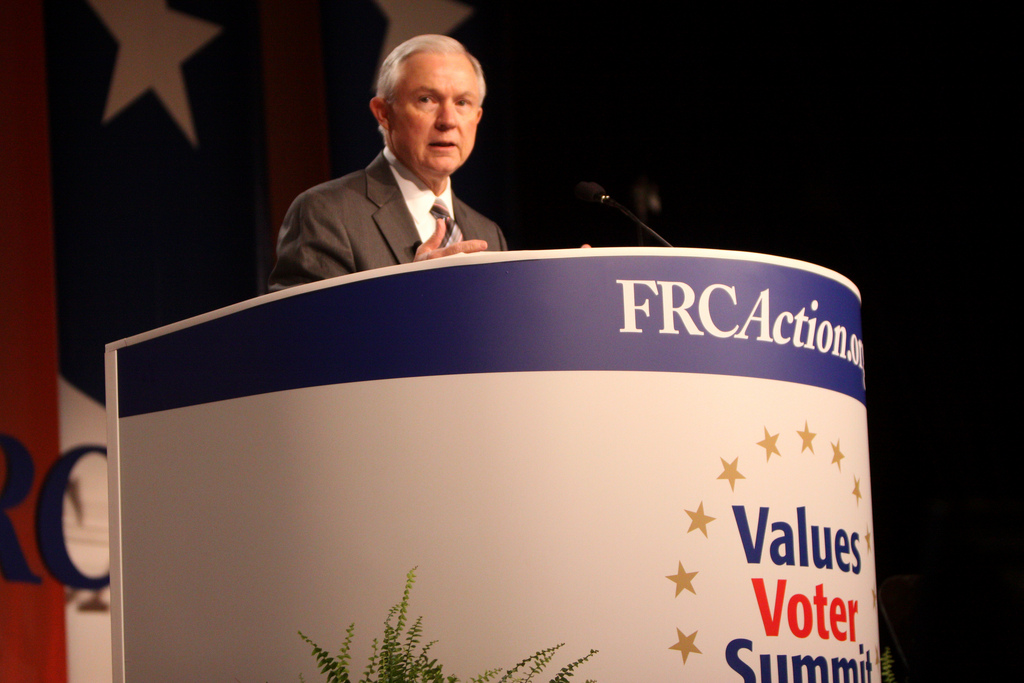 This Man May Be Trump’s Most Dangerous Cabinet Pick

Time and time again, Jeff Sessions has put his own right-wing ideology above Americans' constitutional rights.
By Marge Baker | December 14, 2016

President-elect Donald Trump recently picked Alabama Senator Jeff Sessions as his nominee for U.S. attorney general, a position that leads the Department of Justice and serves as the top law enforcement officer for the country.

But even a cursory look at Sessions’ record shows that he’s absolutely unfit to serve in this role and cannot be trusted to safeguard the rights of all Americans. Time and again, he’s displayed a willingness to put his own ideology above our laws and values.

For example, among other extreme anti-immigrant positions, Sessions has challenged the 14th Amendment’s unambiguous promise that people born in our country are U.S. citizens. Apparently Sessions’ hostility toward immigrants trumps respect for the Constitution.

In a similar vein, after Trump suggested a blatantly unconstitutional ban on Muslims entering the United States, Sessions defended him, saying it’s “appropriate to begin to discuss this.” Sessions also has a shameful record on voting rights, one of our most critical constitutional rights as Americans.

As a federal prosecutor, he led a witch hunt against black organizers helping to register African American seniors, threatening three organizers with 100-year sentences. Later, as a senator, he applauded the Supreme Court’s Shelby County decision gutting the Voting Rights Act, dismissing the need to address ongoing and well-documented racial discrimination in voting.

Perhaps most disturbing, Sessions voted against a prohibition on torture and against a ban on the “cruel, inhuman, or degrading treatment” of prisoners, extremely troubling stances from both moral and legal perspectives.

This’ll be especially critical with soon-to-be President Trump in charge, a leader who’s repeatedly shown contempt for the law and the Constitution, who’s poised to bring an unprecedented number of conflicts of interest into office, and who’s already floated unconstitutional measures like a Muslim registry.

With any number of potential crises looming around the corner, would Sessions — who was the first senator to endorse Trump — be able to enforce laws impartially and independently, rather than simply doing Trump’s bidding?

More than ever before, we need an attorney general who respects the rights of all Americans and the rule of law. Senator Jeff Sessions is not that person. The Senate should reject his nomination and demand a nominee who Americans can trust to protect justice for all.

Marge Baker is the executive vice president at People For the American Way. Distributed by OtherWords.org.