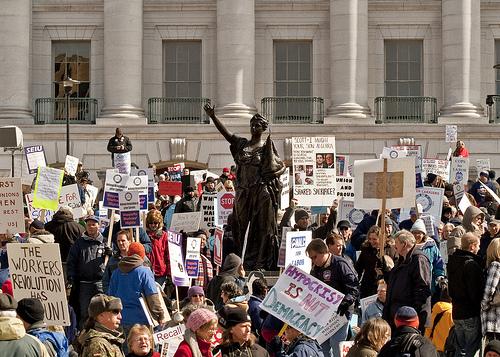 The Wisconsin GOP is running real Republicans as fake Democrats in an official Democratic primary.
By John Franco | July 11, 2011

Wisconsin Republicans have finally stopped pretending to uphold the sanctity of the political process. Instead of allowing the will of the Wisconsin electorate to determine the fate of six Republican state senators facing recall elections, Republican Party leaders have blatantly decided to buy more time.

How? By running fake Democrats (who are actually known Republicans) as official candidates in a primary against real Democratic candidates challenging the Republican recall incumbents. This scheme is technically legal but clearly unethical. And, thanks to Wisconsin’s open primary system, registered Republicans may legally vote for the fake Democrats in Democratic primaries.

This ploy comes as Wisconsin Republicans have made reducing the supposed scourge of “voter fraud” a top priority. In June, Gov. Scott Walker signed a voter ID law that critics say will do more to repress authentic votes than deflect fraudulent ballots. It’s inconsistent and even hypocritical for supporters of this kind of measure to advocate party misrepresentation by candidates during primaries.

Voters successfully petitioned for six Republican state senators to be recalled because of their votes supporting Walker’s controversial “budget repair” bill, a misnamed piece of legislation that scrapped collective bargaining rights for most public employees. This move was so unpopular that it sparked a firestorm of public opinion against it and prompted 14 Democratic state senators to flee to Illinois to stave off a vote. Now, voters will have an opportunity to either re-elect the Republicans who voted for the bill and had served at least one year —a requirement for recall — or choose Democrats to replace them. 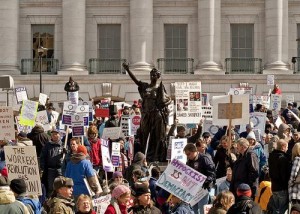 The budget repair bill was passed by a questionable procedural maneuver, in which Walker conveniently changed his mind and defined collective bargaining as a non-fiscal item. The political purpose was to pass the bill with a simple majority (fiscal bills need 60 percent of the Senate present while non-fiscal bills need only 50 percent). All of this was accomplished without any Democrats present.

To their credit, Wisconsin Democratic leaders have opted not to run fake Republican candidates in the Republican primaries. That’s in keeping with Wisconsin’s long tradition of clean politics. Republicans and Democrats in Madison have frequently compromised and formed consensus, whether Democrat Jim Doyle or Republican Tommy Thompson was in the governor’s mansion.

Unfortunately, a new generation of reckless Republicans has taken over the Wisconsin state Senate and many other state legislatures across the nation. For them, compromise is a dirty word. Ideology is in, and ideology does not lend itself to the messy details of governing. It’s so much easier to make pronouncements from on high or simply use every procedural tactic possible to achieve political victory.

If Wisconsin GOP operatives aren’t careful, they may win the battle but lose the war for the hearts and minds of Wisconsin’s voters. In fact, they already have. Gov. Scott Walker’s approval ratings are sinking, and he has become an astonishingly polarizing figure. Overall, 43 percent of Wisconsinites approve of his performance. His approval rating from Republicans is 87 percent and just 9 percent from Democrats. At the same time, his intransigence has inadvertently resuscitated a moribund union movement across the country.

To make matters worse, Sen. Ron Johnson, a Wisconsin Republican elected to the U.S. Senate last year, is accused of using his own private company to pay himself back $10 million as “deferred compensation” after he spent $9 million of his own money to finance his 2010 election. This “scheme” could turn out to be illegal unless Johnson can prove that his company really did owe him that money.

These cynical partisan strategies are ploys for winning political advantage at all costs. They may cause a backlash. The public can and will vote the Republican Party out of office if it goes too far.

The politics of cynicism will not stand. It’s inconsistent with a healthy democracy.