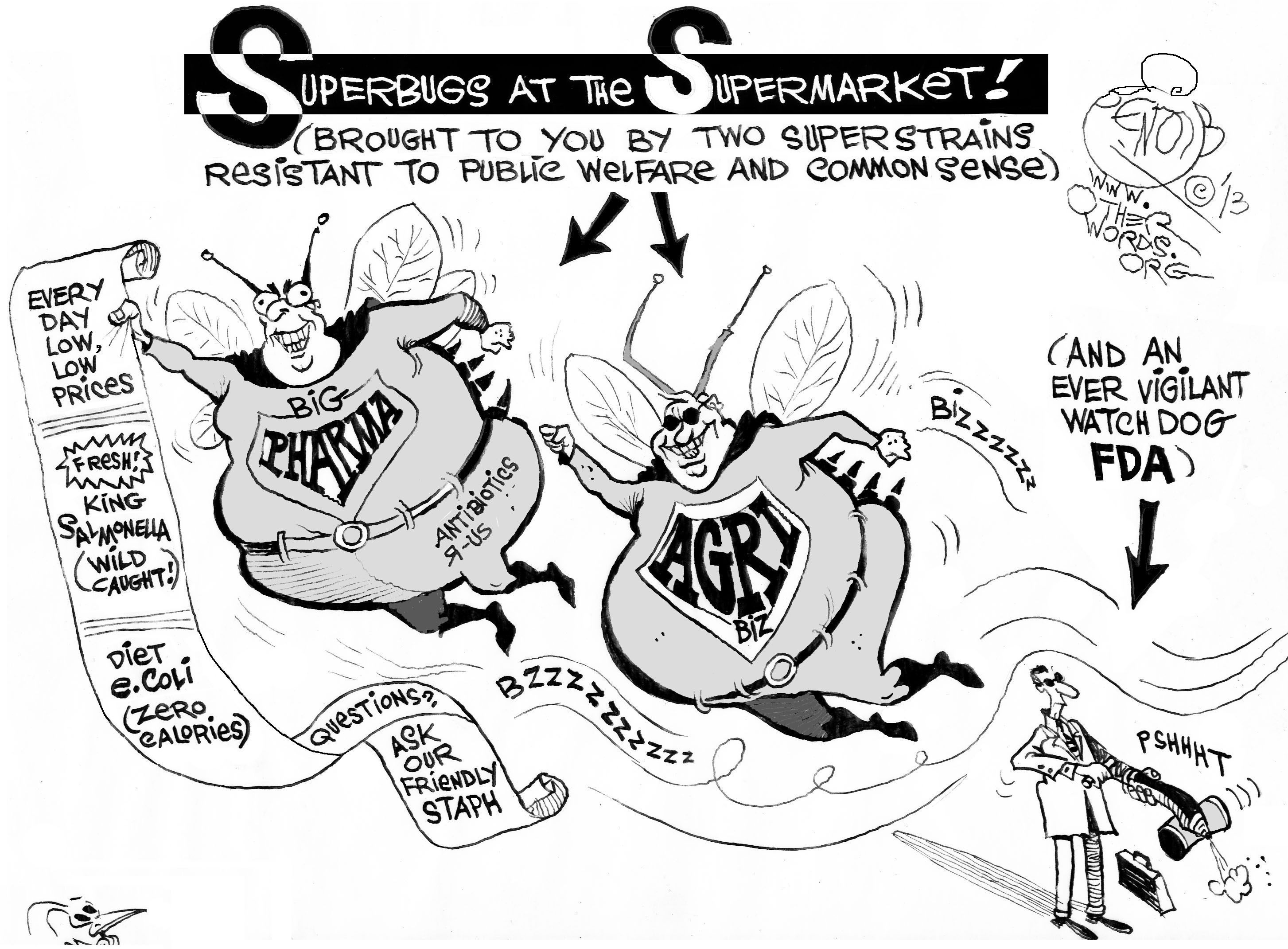 Superbugs at the Supermarket, an OtherWords cartoon by Khalil Bendib

Those Uninvited Guests at Your Barbecue

With most samples of several common store-bought meats testing positive for antibiotic-resistant "superbugs," factory farming practices must change.
By Jill Richardson | May 15, 2013

Planning a Memorial Day barbecue? When you buy meat for that festive meal, watch out for some uninvited guests. An alarming amount of American meat harbors not just pathogens, but “superbugs” — antibiotic-resistant bacteria.

For now, you’d better cook your meat well enough to kill the germs (165F is the magic temperature), but there might be hope for safer alternatives in the future. Consumer advocates and lawmakers are trying to push changes that make these superbugs a thing of the past. That’s never been so important because industrialized agriculture delivers efficiency, productivity, and profit at the expense of food safety.

Our modern-day factory farm system has for too long served up meat that too frequently comes with a side of with pathogens like Salmonella and E. coli. Packing animals into cages and pens and feeding them the cheapest possible diets results in fast growth and tidy profits. But it also sets up sanitary conditions worse than a medieval city. With so many immune-depressed animals packed tightly together (along with their waste), these “farms” are a boon for bacteria.

That’s bad enough because food poisoning can kill you. But the news is even worse because many of the pathogens found in meat aren’t just bugs — they’re superbugs. If they infect you, antibiotics won’t help. 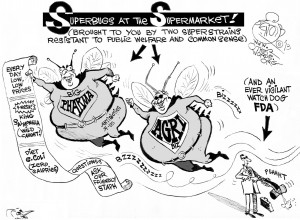 Superbugs at the Supermarket, an OtherWords cartoon by Khalil Bendib

This isn’t an abstract public-health risk. You know how your doctor warns you to take that entire course of prescribed antibiotics even if your symptoms go away? That standard precaution helps ensure that the bacteria making you ill can’t evolve resistance to your antibiotics. The goal is to slam them with such a heavy dose for such a sustained period of time that even the strongest bacteria die off. But why are we so careful about antibiotic use in humans while our agricultural system is practically designed to create superbugs?

Today, a full 80 percent of the antibiotics consumed in this country are given to the animals we eat — even when they aren’t sick. Why? Profits.

In theory, constant low doses of antibiotics help prevent illnesses in livestock. But the antibiotics serve another purpose too: They make cattle, chickens, pigs, and other farm animals grow faster. This arrangement yields a bounty of superbugs because the bacteria that are most susceptible to the antibiotics die while the resistant ones survive and pass on their genes.

If harmful bacteria evolve resistance to the antibiotics we rely on to kill them, we’ll be up a creek without a paddle. Getting food poisoning is lousy enough, but imagine if the antibiotics your doctor prescribes don’t work.

Those numbers are no fluke. Consumer Reports recently tested ground turkey too. Its researches found harmful bacteria in 90 percent of samples. And most of these pathogens were resistant to one or more antibiotics. Even organic ground turkey had alarming bacteria levels, although it was less likely to contain superbugs.

Scientists first found that feeding animals antibiotics when they aren’t sick generates superbugs four decades ago, but we still haven’t changed how we produce meat.

As bad as that is, do you know what’s even scarier? The industry’s weak standards. Under our current regulations, a turkey plant passes safety inspections if less than half of the ground turkey samples tested are contaminated with salmonella.

What’s the fix? Rep. Louise Slaughter, the sole microbiologist in Congress, has been trying since 2007 to ban the use of antibiotics that are important in human medicine for healthy farm animals. The New York Democrat’s legislation wouldn’t solve every problem with our factory farms. But at least it would do something to fight the spread of superbugs.

That’s good, but it’s a band-aid. The real answer lies in an end to the kind of farming that kills livestock and poultry before they head to the slaughterhouse.