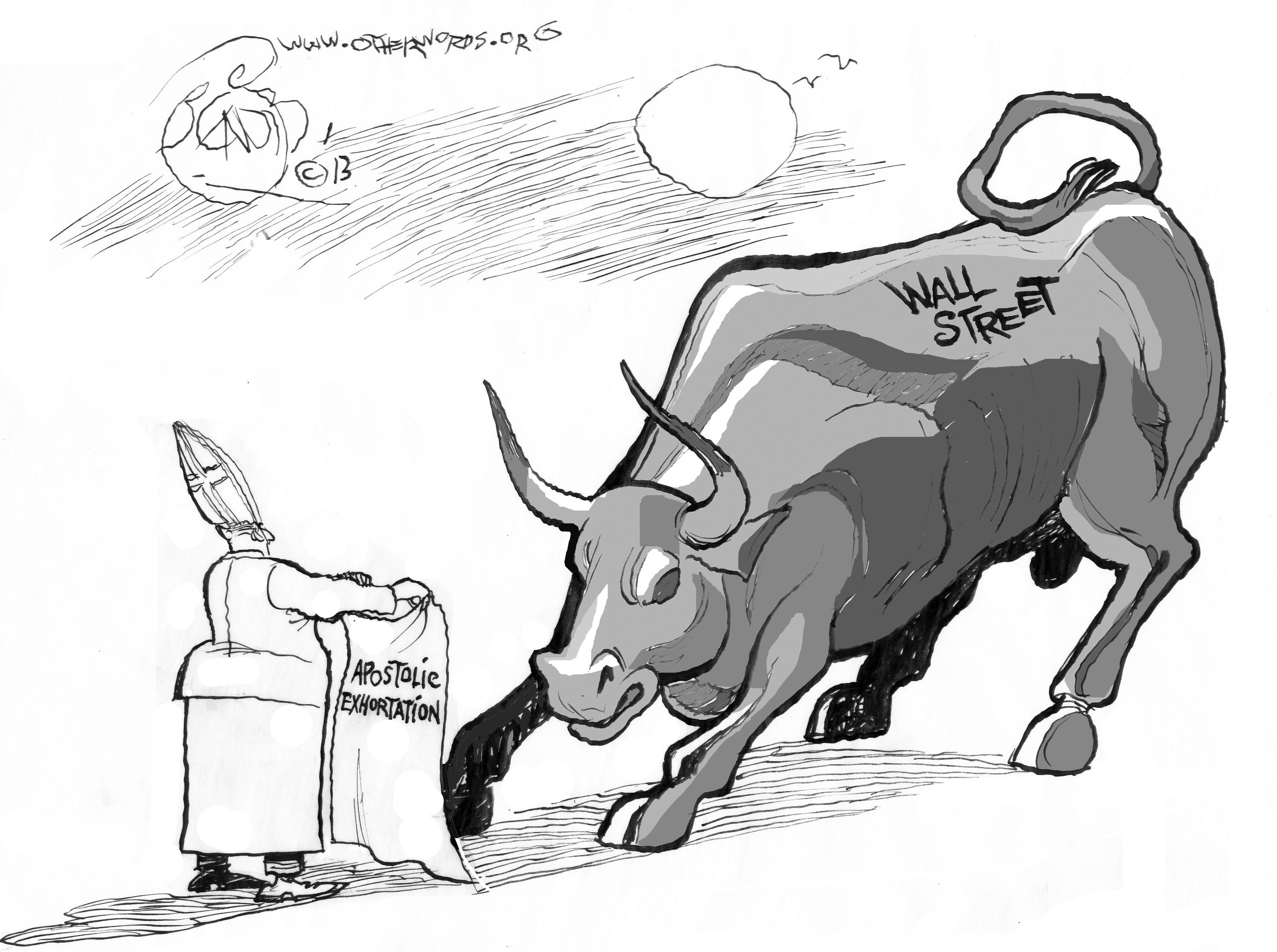 Thou Shalt Not Tolerate Inequality

By rejecting a "deified Market," Pope Francis is protecting our societies — and souls.
By Sam Pizzigati | December 4, 2013

Sometimes you don’t have to say anything “new” to make news. Consider the “apostolic exhortation” the Vatican recently released.

This statement from Pope Francis, observers note, didn’t really break new theological ground. But the Pope’s exhortation, his first since he stepped onto the world stage, still made front page news the world over — and fully deserved that attention. 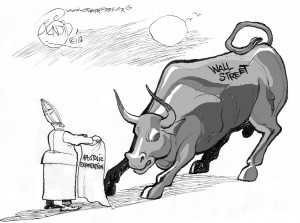 What makes this new papal statement so significant? No global religious figure has ever before denounced economic inequality with an assault as wide-ranging — and accessible.

Just what insights can we take from what Pope Francis has to say about inequality? These five jump out.

Apologists for inequality like to argue that grand private concentrations of wealth serve as an incentive for the rest of us and supply the investments that keep economies thriving.

Pope Francis, in clear language that demonstrates his command of the vernacular, blows away these claims.

“Some people continue to defend trickle-down theories which assume that economic growth, encouraged by a free market, will inevitably succeed in bringing about greater justice and inclusiveness in the world,” Francis writes.

This rich-people-friendly take on the world, he points out, “has never been confirmed by the facts.”

Any serious attempt to undo the inequality that markets engender, our world’s deep pockets insist, risks upsetting the natural order that markets in their inherent wisdom create.

But, in real life, markets follow rules. And these rules reflect the economic power of those who set them, not any deeper wisdom or divine providence. Pope Francis sees no reason to automatically accept the verdicts that markets deliver. He sees every reason to examine how markets actually operate — and to challenge those operations that leave us staggeringly unequal.

We need to reject “the absolute autonomy of markets” and confront “the structural causes of inequality,” he writes. Until we take these essential steps, “no solution will be found for the world’s problems.”

A previous world-famous Francis — the English philosopher Sir Francis Bacon — advised us centuries ago that wealth, like manure, only does good when we spread it around.

Pope Francis agrees. His exhortation encourages those who sit at our economic summits “to ponder” the teachings of the ancient sage who told us that “not to share one’s wealth with the poor is to steal from them.” We must, he advises, “say ‘thou shalt not’ to an economy of exclusion and inequality.”

Adds the Pope: “Such an economy kills.”

Fourth, inequality endangers us all, not just the poor.

In an era where “the thirst for power and possessions knows no limits,” the Pope reminds us, anything that “stands in the way of increased profits” — “like the environment” — stands “defenseless before the interests of a deified market.”

The security we all seek in our daily lives, Pope Francis notes, will remain unattainable so long as we remain perilously unequal. No “law enforcement or surveillance systems can indefinitely guarantee tranquility,” he writes, until we reverse “exclusion and inequality.”

“Just as goodness tends to spread,” he explains, “the toleration of evil, which is injustice, tends to expand its baneful influence and quietly to undermine any political and social system.”

In relatively equal societies, where most people can afford the same things, material things in general tend not to matter that much. But in unequal societies, everything reverses. Things — and the money to buy them — become primary.

“The worship of the ancient golden calf,” observes Pope Francis, “has returned in a new and ruthless guise.”

Sums up the Pope: “The culture of prosperity deadens us; we are thrilled if the market offers us something new to purchase; and in the meantime all those lives stunted for lack of opportunity seem a mere spectacle; they fail to move us.”

And Pope Francis clearly wants us moving. Against inequality.