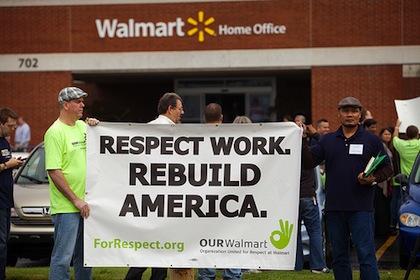 Shouldn't Sam Walton's heirs at least pony up a pittance from their prodigious inheritance for a few turkey-and-sweet-potato dinners on Thanksgiving?
By Jim Hightower | November 27, 2013

Just look at the chain’s outlet in Canton, Ohio, where management set up bins for food donations, asking people to give generously to the poor who otherwise would not have a Thanksgiving dinner. But the bins weren’t for customers — they were tucked back in the employees-only area.

Walmart’s Thanksgiving food drive was for its own employees, beseeching low-wage workers to donate to even lower-wage workers who can’t afford a family dinner on this national day of thanks.

Yes, this corporate colossus, with an annual income greater than 140 countries, wants its poorly paid employees to buy food for fellow employees whose paychecks leave them in deep poverty. More astonishing is the corporation’s insipid, self-congratulatory insistence that the employee food drive demonstrates its deep ethical commitment to the welfare of all Walmart “associates” (as it grandiosely calls its beleaguered workers).

“This is part of the company’s culture to rally around associates and take care of them,” a spokesman for the big-box giant asserted.

But, of course, Walmart isn’t taking care of its workers at all. It won’t pay a living wage, won’t provide decent health care or other needed benefits, won’t allow workers to organize so they can have their own voice — and then abandons them to beg for scraps if they want to share in Thanksgiving with other Americans.

This is obscene and a moral outrage. Three Waltons — Alice, Robson, and Jim — are heirs to the Walmart fortune and are sitting on more than $33 billion apiece, thanks to decades of profiting on the low wages the corporation pays. Shouldn’t they at least pony up a pittance from their prodigious inheritance for a few turkey-and-sweet-potato dinners on Thanksgiving?

To push for a modicum of fairness, contact www.ForRespect.org.